The limited reservoir of fossils fuels and the ever-increasing threats of climate change have encouraged researchers to develop alternative technologies to produce eco-friendly fuels. Green hydrogen generated from the electrolysis of water using renewable electricity is considered a next-generation renewable energy source for the future. But in reality, the overwhelming majority of hydrogen fuel is obtained from the refining of fossils fuels due to the high cost of electrolysis.

Currently, the efficiency of water electrolysis is limited and often requires high cell voltage due to the lack of efficient electrocatalysts for hydrogen evolution reactions. Noble metals such as platinum (Pt) are used as catalysts to improve hydrogen generation in both acidic/alkaline media. However, these noble metal catalysts are very expensive and show poor stability under long-term operation.

Recently, single-atom catalysts have shown excellent activity compared to their nanomaterial-based counterparts. This is because they are able to achieve up to 100% atom utilization, whereas in nanoparticles only the surface atoms are available for reaction. However, due to the simplicity of the single-metal-atom center, carrying out further modification of the catalysts to perform complex multistep reactions is rather difficult.

The simplest way to modify the single atoms is by turning them into single-atom dimers, which combine two different single atoms together. Tuning the active site of single-atom catalysts with dimers can improve the reaction kinetics thanks to the synergistic effect between two different atoms. However, while the synthesis and identification of the single-atom dimer structure have been known conceptually, its practical realization has been very difficult.

This problem was tackled by a research team led by Associate Director LEE Hyoyoung of the Center for Integrated Nanostructure Physics within the Institute for Basic Science (IBS) located at Sungkyunkwan University. The IBS research team successfully developed an atomically dispersed Ni-Co dimer structure stabilized on a nitrogen-doped carbon support, which was named NiCo-SAD-NC.

The researchers found that annealing for two hours at 800°C in an argon atmosphere was the best condition for obtaining the dimer structure. Other single atom dimers, such as CoMn and CoFe could also be synthesized using the same method, which proves the generality of their strategy.

The research team evaluated the catalytic efficiency of this new system in terms of the overpotential required to drive the hydrogen evolution reaction. The NiCo-SAD-NC electrocatalyst had a comparable level of overvoltage as commercial Pt-based catalysts in acidic and alkaline media. NiCo-SAD-NC also exhibited 8 times higher activity than Ni/Co single-atom catalysts and heterogeneous NiCo nanoparticles in alkaline media. At the same time, it achieved 17 and 11 times higher activity than Co and Ni single-atom catalysts, respectively, and 13 times higher than conventional Ni/Co nanoparticles in acidic media.

In addition, the researchers demonstrated the long-term stability of the new catalyst, which was able to drive reaction for 50 hours without any change of structure. The NiCo-SAD exhibited superior water dissociation and optimal proton adsorption compared to other single-atom dimers and Ni/Co single-atom sites, boosting pH-universal catalyst’s activity based on the density functional theory simulation. 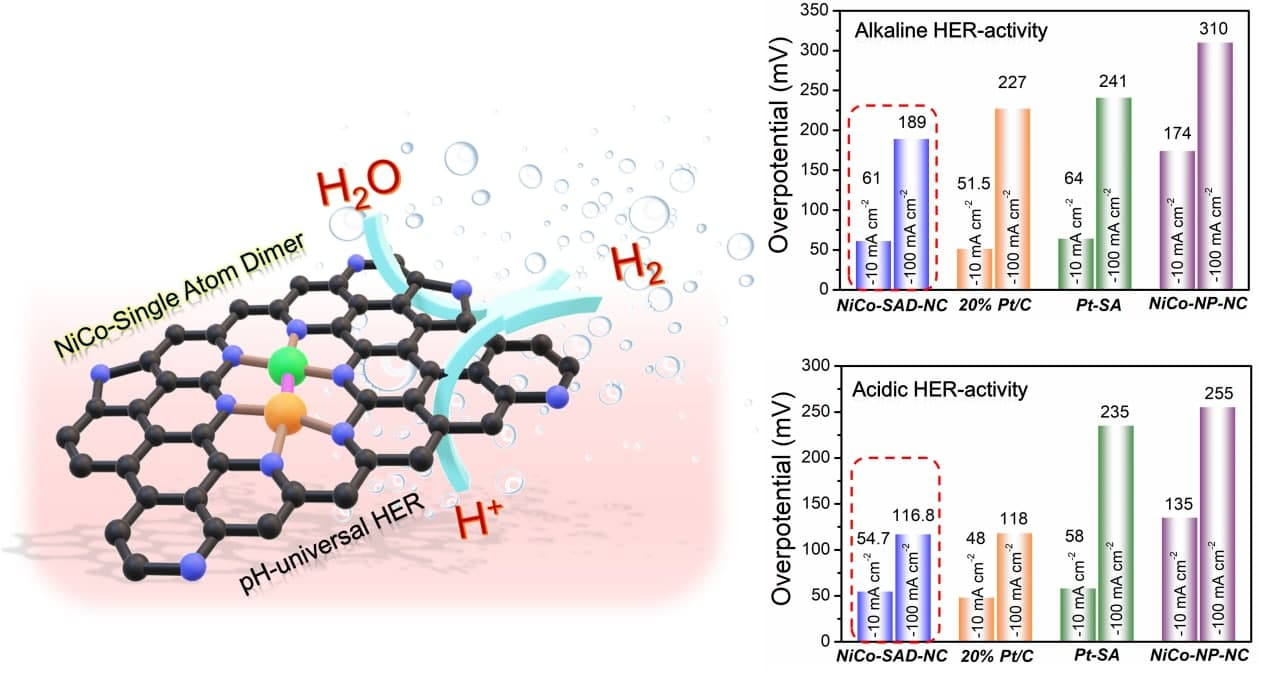 “We were very excited to discover that the novel NiCo-SAD structure dissociates water molecules with a much lower energy barrier and accelerates hydrogen evolution reaction in both alkaline and acidic media with performances comparable to that of Pt, which addressed the shortcomings of the individual Ni and Co single-atom catalysts. The synthesis of such single atom dimer structure was a long-standing challenge in the field of single-atom catalysts,” notes Associate Director Lee, the corresponding author of the study.

He further explains, “This study takes us a step closer to a carbon-free and green hydrogen economy. This highly efficient and inexpensive hydrogen generation electrocatalyst will help us overcome long-term challenges of cost-competitive green hydrogen production: to produce high-purity hydrogen for commercial applications at a low price and in an eco-friendly manner.”

The study was published in Nature Communications (IF 14.92), a world-renowned journal in the field of basic science.