Carnegie’s Yingwei Fei and Lin Wang were part of an international research team that synthesized a new ultrahard form of carbon glass with a wealth of potential practical applications for devices and electronics. It is the hardest known glass with the highest thermal conductivity among all glass materials. Their findings are published in Nature.

Function follows form when it comes to understanding the properties of a material. How its atoms are chemically bonded to each other, and their resulting structural arrangement, determines a material’s physical qualities—both those that are observable by the naked eye and those that are only revealed by scientific probing.

Carbon is unrivaled in its ability to form stable structures—alone and in combination with other elements. Some forms of carbon are highly organized, with repeating crystalline lattices. Others are more disordered, a quality termed amorphous.

“The synthesis of an amorphous carbon material with three-dimensional bonds has been a long-standing goal,” explained Fei. “The trick is to find the right starting material to transform with the application of pressure.”

“For decades Carnegie researchers have been at the forefront of the field, using laboratory techniques to generate extreme pressures to produce novel materials or mimic the conditions found deep inside planets,” added Carnegie Earth and Planets Laboratory Director Richard Carlson.

Because of its extremely high melting point, it’s impossible to use diamond as the starting point to synthesize diamond-like glass. However, the research team, led by Jilin University’s Bingbing Liu and Mingguang Yao—a former Carnegie visiting scholar—made their breakthrough by using a form of carbon composed of 60 molecules arranged to form a hollow ball. Informally called a buckyball, this Nobel Prize-winning material was heated just enough to collapse its soccer-ball-like structure to induce disorder before turning the carbon to crystalline diamond under pressure. 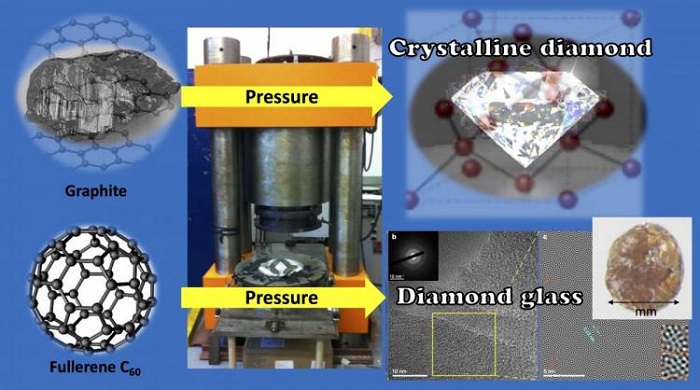 Researchers use multi-anvil press to turn fullerene C60 into diamond glass, similar to the process of converting graphite to diamond in high-pressure apparatus.

The team used a large-volume multi-anvil press to synthesize the diamond-like glass. The glass was sufficiently large for characterization. Its properties were confirmed using a variety of advanced, high-resolution techniques for probing atomic structure.

“The creation of a glass with such superior properties will open the door to new applications,” Fei explained. “The use of new glass materials hinges on making large pieces, which has posed a challenge in the past. The comparatively low temperature at which we were able to synthesize this new ultrahard diamond glass makes mass production more practical.”

Read the original article on Carnegie Institution for Science.