Zooming in on the Future of Microscopy

MSU is home to the first microscope of its kind in the U.S. and it’s now showing what it can do.

When physicist Tyler Cocker joined Michigan State University in 2018, he had a clear goal: build a powerful microscope that would be the first of its kind in the United States. Having accomplished that, it was time to put the microscope to work.

“We knew we had to do something useful,” said Cocker, Jerry Cowen Endowed Chair in Experimental Physics in the College of Natural Science’s Department of Physics and Astronomy. “We’ve got the nicest microscope in the country. We should use this to our advantage.”

With its microscope, Cocker’s team is using light and electrons to study materials with an unparalleled intimacy and resolution. The researchers can see atoms and measure quantum features within samples that could become the building blocks of quantum computers and next-generation solar cells.

The team has given the world the first glimpse of those capabilities on Nov. 23 in the journal Nature Communications, taking snapshots of how electrons are distributed in what are known as graphene nanoribbons.

“This is one of the first demonstrations that this type of microscope can tell you something new,” Cocker said. “We’re very excited and proud of the work. We also have all these ideas in our heads about where we want to go with it.”

Cocker’s team is part of a collaboration that’s working to develop these nanoribbons into qubits, pronounced “q-bits,” for quantum computers. The collaboration spans five institutions and the work is supported by a grant from the Office of Naval Research that will provide more than $1 million to MSU’s contribution.

For the Nature Communications study, Cocker teamed up with the research group of Roman Fasel, a professor at the Swiss Federal Laboratories for Materials Science and Technology. Fasel invented what’s known as the bottom-up growth method for graphene nanoribbons. Fasel’s lab has synthesized molecules that, with the addition of heat, can build themselves into ribbons with a predetermined shape and size.

An illustration shows graphene nanoribbons on top of a gold substrate. Experimental data revealed by the Michigan State microscope is shown in blue above the ribbons.

“You essentially bake the molecules like a cake,” Cocker said. “Then the properties of the ribbon you end up with are predefined. You know what you’re getting before you start.”

The Swiss lab sent the molecules to MSU, where Cocker’s lab grew the precision ribbons and then examined them with its microscope. The basis for the instrument is what’s known as a scanning tunneling microscope, or STM, that brings a very sharp tip or probe extremely close to the specimen being studied without touching it.

Even though the tip and sample aren’t in contact, electrons can still jump or tunnel from the tip to the sample. By recording how the electrons tunnel — for example, how many electrons tunnel and how quickly — the microscope builds high-resolution images of the sample and its properties. 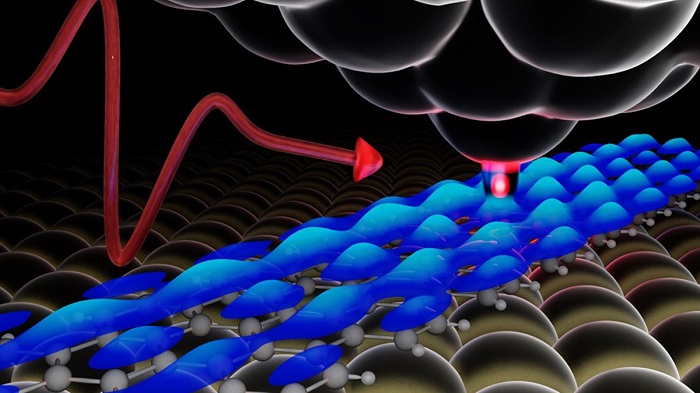 A schematic representing a microscopy measurement where a pulse of laser light (red curve) illuminates an atomically sharp needle (top) positioned above the sample surface. The graphene nanoribbon sits on top of a gold substrate. Experimental data is shown in blue, revealing the distribution of electrons above the nanoribbon.

What Cocker and his team have done is couple this conventional STM with extremely short pulses of laser light, which lets them bring the STM’s tip even closer to the sample. As a result, they’re able to extract more detailed information from a sample than ever before.

“It’s almost like we’re zooming in by physically bringing the tip closer,” he said.

The team could then characterize different nanoribbons with atomic resolution, revealing unprecedentedly clear information about how electrons are distributed within the structure.

In addition to a publication, this work also has earned awards for its Spartan authors. Postdoctoral scholar Vedran Jelic won an award for his poster about the research at a recent workshop in Germany. Graduate student researcher Spencer Ammerman won an award for presenting the work last November at a conference hosted by the Infrared, Millimeter and Terahertz Wave Society, which also awarded Cocker its 2021 Young Scientist Award.

As excited as Cocker and his team are about the new paper and these accolades, they’re looking forward to what’s next. For example, the team is working on going from still images to movies of samples, showing how electrons move within the ribbons as the nanomaterial absorbs light.

The researchers are also building a second microscope with support from a Department of Defense grant awarded in June, meaning the only two microscopes like this in the U.S. will both be at MSU.

“This paper is very exciting, but it’s also just the first step,” Cocker said. “We think it’s going to open up a lot of possibilities.”