Researchers at the University of Bonn have developed a molecular structure that can cover graphite surfaces with a sea of tiny flagged "flagpoles". The properties of this coating are highly variable. It may provide a basis for the development of new catalysts. The compounds could also be suitable for measuring the nanomechanical properties of proteins. The results were published online in advance in the journal "Angewandte Chemie". Now the print edition has been published, which shows a part of the sea of flags as the cover image. 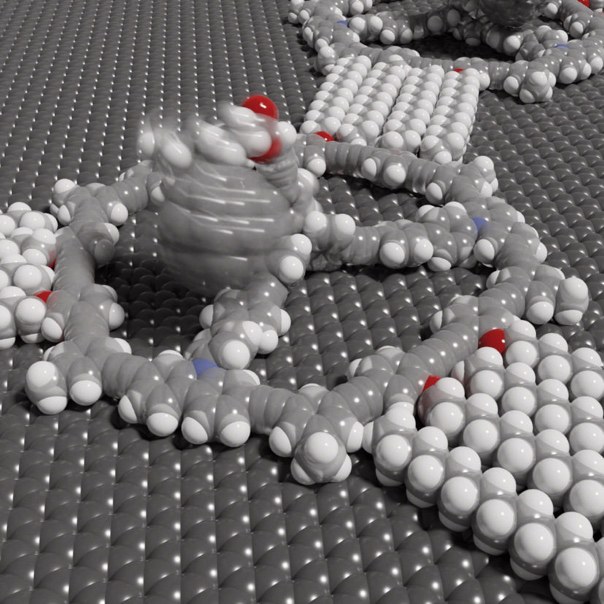 Model of a molecular Mercedes star-shaped molecule. The flagpole on top of it has a fullerene attached to it, the movement of which is also visualized here using a smudge effect. The model is also shown on the cover of the current issue of Angewandte Chemie.

The basic building block of the surface covering is a large molecular ring. It is stabilized on the inside by spokes and therefore bears a certain resemblance to a Mercedes star. In addition, the ring has three little arms that point outward. Each of them can grab the arm of another ring. This allows the molecules to come together to form a huge sheet-like tissue without any outside intervention. For this, it is sufficient to dip a piece of graphite (which is the material that pencil leads, for example, are made of) into a solution of these rings. As if by magic, these then cover the graphite surface with a net-like structure within a short time.

The mesh size of the net can be precisely adjusted by changing the length of the arms. The real highlight of the coating, however, lies in another modification option: "We can attach tiny poles of different lengths to the center of the rings," explains Prof. Dr. Sigurd Höger of the Kekulé Institute for Organic Chemistry and Biochemistry at the University of Bonn. He led the study together with Dr. Stefan-Sven Jester (also Kekulé Institute) and Prof. Dr. Stefan Grimme of the Mulliken Center for Theoretical Chemistry. "We can then in turn attach other molecules to them, like flags to a flagpole."

A miniature sea of flags

The distances between the poles are so large that even very bulky molecules can be attached to their tips without getting in each other's way. They are then held in place by the poles on the one hand, but at the same time are free to move like a flag in the wind. Additionally, they are readily accessible to substances in the solution and can react with them. "This may allow novel catalysts to be realized," Höger speculates. "Potentially, this will enable chemical reactions that were previously unfeasible or only possible with great effort."

Any molecules can in principle be attached to the tips of the flagpoles. In the future, this should also allow, for example, to measure the nanomechanical properties of proteins. To do this, the protein molecule would be held by the flagpole and then pulled apart with a kind of "gripper arm". "Proteins consist of long filaments, but most of them are folded into compact sphere, which gives them their characteristic shape," says Höger. "The forces at work in the formation of the latter might be more accurately determined by such experiments."

In Dr. Jester's laboratory, the molecules produced by Höger and his collaborators were deposited on graphite and examined with a scanning tunneling microscope. In addition, the surface patterns of the flag molecules were also simulated on the computer. "This enabled us to show that the molecules actually arrange themselves and behave exactly as predicted by our concepts and the theory," explains Jester, who, like Höger and Grimme, is a member of the Transdisciplinary Research Area "Building Blocks of Matter and Fundamental Interactions" (TRA Matter) at the University of Bonn.

Simulating the dynamics of such large and complex molecules requires enormous computational resources. In recent years, Prof. Grimme's research group has developed sophisticated methods that nevertheless make this possible. "We can use these methods, for example, to distinguish between flexibly and rigidly tethered molecules in the simulation and to predict their behavior," Grimme explains.

Among other molecules, the Bonn team attached a football-like structure to the flagpoles, a so-called fullerene. There it was able to dangle freely around the top of each mast held by a kind of nano-cord. " We can actually see this movement of the fullerenes, predicted by computer simulations, in our scanning tunneling microscope images," Jester says. This is because the images of the molecular footballs are not sharp, but blurred: Much like photographing a real ball on a string moving back and forth in the wind in low light. Rigidly attached reference molecules, on the other hand, are clearly visible in the scanning tunneling microscope images.

Read the original article on University of Bonn.