A review defining quantum nanoscience published in Nature Nanotechnology this week places coherence at the center of this developing field.

The scale of investment in quantum computation, simulation and sensing is growing at a tantalizing pace. Harnessing the nanoscale to engineer useful quantum effects is a transformative capability of huge relevance to industries and governments. By summarizing the current state and the future directions of quantum nanoscience, a review defining quantum nanoscience published in Nature Nanotechnology this week will help investors and funding agencies make informed decisions on how and why to participate in the quantum technology revolution. 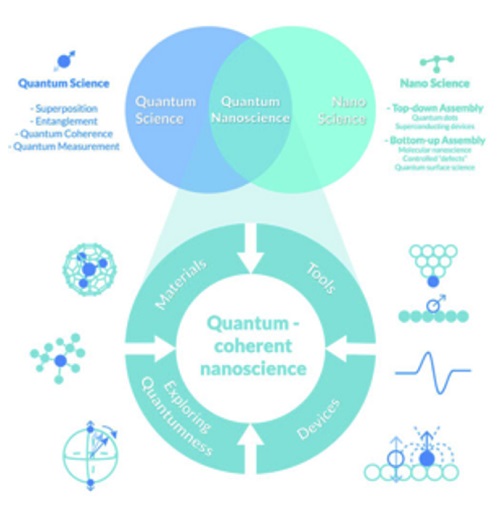 Quantum nanoscience is the convergence of quantum and nanoscience, where the research of materials, research tools, new devices, and the exploration of quantumness drive toward quantum coherence.

“The basis for our definition is the new understanding of quantum, which includes superposition, entanglement, and - most importantly - coherence,” stated Andreas Heinrich, director of the IBS Center for Quantum Nanoscience (QNS) who spearheaded the alliance of researchers from multiple fields who wrote the review. The process began when QNS held a workshop in 2017, bringing together leaders from diverse fields of nanoscience including leading experimentalists and theorists in fields spanning NV centers, quantum engineering, quantum dots, and spins on surfaces from around the world. Among the participants were pioneers such as the 2010 nanoscience Kavli prize winner Don Eigler, decorated theorist who proposed the quantum computer in 1997 Daniel Loss, and 2019 RSC Centenary prize winner for her world-leading research on molecular magnetism Roberta Sessolli.

“This article is the culmination of a visionary initiative of QNS,” stated Andrea Morello, Scientia Professor of Quantum Engineering at UNSW and co-author of the paper. “We all have worked in the field for decades, but had never spent a whole week with eminent colleagues, asking ourselves: “what IS quantum nanoscience?” continues Morello. The answer converged on the definition that quantum nanoscience – the novel, exciting, forward-looking essence of it – is what happens when researchers aim at harnessing quantum coherence. The authors then fleshed out how exactly the nanometer scale becomes the physical and technological enabler for this program. The result is a succinct review, where the relation between nanometer-size and quantum coherence is brought to the surface, in a broad range of physical systems.

As part of the years-long process of capturing and refining the definition, QNS hosted the first ever conference on Quantum Nanoscience in Fall 2019. 138 scientists from 10 countries converged on QNS’s center in Seoul united by the goal of understanding and applying the quantum nature of objects at the nanoscale. In fact, this was the first time that the world’s leading researchers working in fields previously considered to be disparate were brought together as the quantum nanoscience community, which in turn sharpened the definition’s focus on coherence.

Director Heinrich notes that, “the next challenge is to engage the researchers who see themselves through the lens of their specific line of inquiry, such as quantum dots or NV centers, to invite them to see themselves as collaborative contributors in the cross-disciplinary field that is quantum nanoscience.”