Nanoengineers at the University of California San Diego have developed a new and potentially more effective way to deliver messenger RNA (mRNA) into cells. Their approach involves packing mRNA inside nanoparticles that mimic the flu virus—a naturally efficient vehicle for delivering genetic material such as RNA inside cells.

The new mRNA delivery nanoparticles are described in a paper published recently in the journal Angewandte Chemie International Edition.

The work addresses a major challenge in the field of drug delivery: getting large biological drug molecules safely into cells and protecting them from organelles called endosomes. These tiny acid-filled bubbles inside the cell serve as barriers that trap and digest large molecules that try to enter. In order for biological therapeutics to do their job once they are inside the cell, they need a way to escape the endosomes.

“Current mRNA delivery methods do not have very effective endosomal escape mechanisms, so the amount of mRNA that actually gets released into cells and shows effect is very low. The majority of them are wasted when they get administered,” said senior author Liangfang Zhang, a professor of nanoengineering at the UC San Diego Jacobs School of Engineering.

Achieving efficient endosomal escape would be a game changer for mRNA vaccines and therapies, explained Zhang. “If you can get more mRNA into cells, this means you can take a much lower dose of an mRNA vaccine, and this could reduce side effects while achieving the same efficacy.” It could also improve delivery of small interfering RNA (siRNA) into cells, which is used in some forms of gene therapy.

In nature, viruses do a very good job of escaping the endosome. The influenza A virus, for example, has a special protein on its surface called hemagglutinin that, when activated by acid inside the endosome, triggers the virus to fuse its membrane with the endosomal membrane. This opens up the endosome, enabling the virus to release its genetic material into the host cell without getting destroyed. 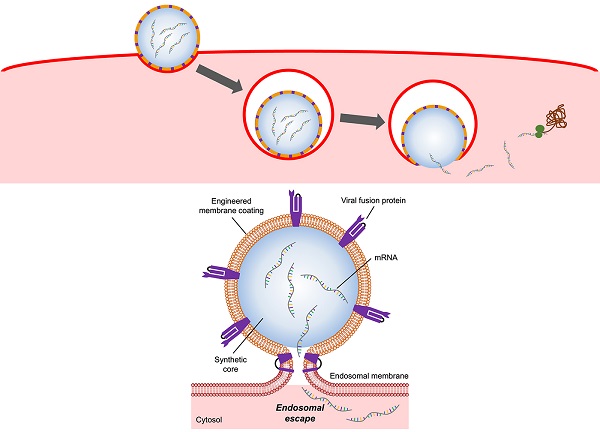 Illustration of a flu virus-mimicking nanoparticle entering and releasing mRNA into a host cell (top). A special protein on the nanoparticle’s surface triggers it to fuse with the endosomal membrane, allowing its mRNA cargo to safely escape into the host cell (bottom).

Zhang and his team developed mRNA delivery nanoparticles that mimic the flu virus’s ability to do this. To make the nanoparticles, the researchers genetically engineered cells in the lab to express the hemagglutinin protein on their cell membranes. They then separated the membranes from the cells, broke them into tiny pieces, and coated them onto nanoparticles made from a biodegradable polymer that has been pre-packed with mRNA molecules inside.

The finished product is a flu virus-like nanoparticle that can get into a cell, break out of the endosome, and free its mRNA payload to do its job: instruct the cell to produce proteins.

The researchers tested the nanoparticles in mice. The nanoparticles were packed with mRNA encoding for a bioluminescent protein called Cypridina luciferase. They were administered both through the nose—the mice inhaled droplets of a nanoparticle-containing solution applied at the nostrils—and via intravenous injection. The researchers imaged the noses and assayed the blood of the mice and found a significant amount of bioluminescence signal. This was evidence that the flu virus-like nanoparticles effectively delivered their mRNA payloads into cells in vivo.