A team of mechanical engineering researchers has used additive manufacturing and nanotechnology to detect increasingly tiny levels of biomarkers.

A group of Carnegie Mellon University mechanical engineering researchers has pushed the limits of diagnostic testing to a level never before seen.

The researchers, led by Rahul Panat, an associate professor of mechanical engineering, have developed a sensor system that was able to successfully detect levels of the neurotransmitter dopamine down to femtomolar concentrations. They have published their findings in Nature Communications.

To put that into perspective, imagine pouring less than a gram of dopamine in Oregon’s Crater Lake, the deepest lake in the U.S. This sensor could detect it.

“We have broken a fundamental barrier to the limit-of-detection for biomolecules,” explained Azahar Ali, the lead author of the paper. In other words, this is the smallest concentration of dopamine to ever be reliably detected.

This incredible breakthrough was achieved by leveraging the power of additive manufacturing and nanotechnology to create an incredibly sensitive detection system, consisting of a three-dimensional electrode placed into a microfluidic channel, where samples are pumped through. 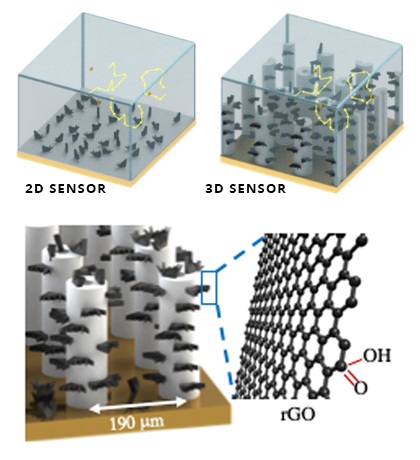 Earlier electrodes consisted of a two-dimensional detection surface, which were unable to detect increasingly small concentrations of target molecules since most of them would float by without interacting. To push that limit, the electrode’s detection area would have to move into the third dimension to help “catch” the molecules as they move through it.

To achieve this, the team used a technique known as aerosol jet 3D nanoparticle printing, allowing them to build tiny micropillars using silver nanoparticles. Each droplet was added atop the previous and sintered together until a hollow pillar was formed. Then, they were covered with small flakes of graphene oxide, which further increased the pillar’s surface area and helped to detect dopamine.

But why dopamine? It’s an important signaling molecule in the brain and body, commonly associated with controlling your mood. However, it also plays a role in multiple neurodegenerative diseases, including schizophrenia, Alzheimer’s, and addiction. It can be found in the blood, but at very low levels.

This device’s high sensitivity could allow a physician to draw a small drop of blood and test for dopamine’s presence, creating a minimally invasive diagnostic method. This could allow for earlier, easier testing for these afflictions, which could potentially save lives. Panat believes that advancements like this are far overdue.

“I believe that the biomedical device industry has fallen behind in catching up with the progress in miniaturization and advancements in microelectronics. And we in academia can help change that,” he says.

Last year, his team used a similar micropillar system to develop a rapid Covid-19 antibody test. The device’s relative simplicity, however, means that it can be adapted to detect a wide variety of different molecules, from antibodies to neurotransmitters to many things in between.

Regardless of where we see this technology implemented, however, it was made possible by using engineering tools and strategies to address an existing problem from a different discipline. The result is an innovative solution that will help define the future of medicine.