Scientists from Honda Research Institute USA, Inc. (HRI-US) have synthesized atomically thin "nanoribbons" – atomic scale thickness, ribbon-shaped materials – that have broad implications for the future of quantum electronics, the area of physics dealing with the effects of quantum mechanics on the behavior of electrons in matter. HRI-US's synthesis of an ultra-narrow two-dimensional material built of a single or double layer of atoms demonstrated the ability to control the width of these two-dimensional materials to sub-10 nanometer (10-9 meter) that results in quantum transport behavior at much higher temperatures compared to those grown using current methods. The team of scientists with collaborators from Columbia and Rice Universities as well as Oak Ridge National Laboratory co-authored a new paper on the topic that was published in Science Advances. 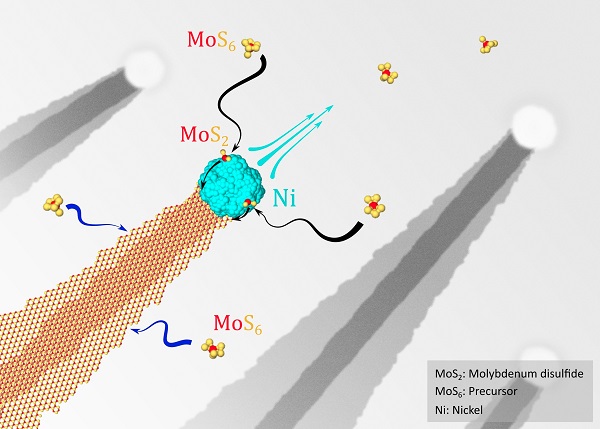 HRI-US's growing technology has the potential to bring quantum technologies such as quantum computing and sensing to higher temperatures than those required with currently used materials. Common fabrication methods so far mostly rely on techniques such as nanolithography, which print or etch nanometer-scale structures. By contrast, HRI-US scientists developed a method to controllably grow the materials by using nickel nanoparticles as a seed to control the width of two-dimensional materials such as molybdenum disulfide. The result is a much narrower width than those synthesized by conventional methods. The ultra-narrow (about 7-8 nanometers) two-dimensional materials grown by HRI-US researchers demonstrate quantum electron transport, known as Coulomb blockade oscillation, at temperatures of about 60 K (or -213oC), about 15 times higher than those materials synthesized by conventional methods about or less than 4 K (or -269oC), paving the way for more energy-efficient quantum devices.

"Our novel growth technology introduces the width as an additional degree of freedom in the atomically thin layered materials revealing and engineering their rich new electronic behaviors," said Dr. Avetik Harutyunyan, senior chief scientist at HRI-US and the corresponding author of the paper in Science Advances. "The potential applications are extremely broad. We see immediate opportunities for the applications in the high speed, low-energy consumption electronics, spintronics, quantum sensing, quantum and neuromorphic computing."

"This new synthesis technology represents an important breakthrough in the field of growth of 2D materials," said Dr. Xufan Li, senior scientist at HRI-US and a lead author of the paper. "We were able to achieve atomic scale control over MoS2 nanoribbon width by using Ni nanoparticles as a seed that enables nanoribbon growth via vapor-liquid-solid (VLS) mechanism. Next we are thinking to control the edge structures of nanoribbons another way to amend their electronic properties."