Spin waves, a change in electron spin that propagates through a material, could fundamentally change how devices store and carry information. These waves, also known as magnons, don’t scatter or couple with other particles. Under the right conditions, they can even act like a superfluid, moving through a material with zero energy loss.

But the very properties that make them so powerful also make them nearly impossible to measure.  In a previous study, researchers at the Harvard John A. Paulson School of Engineering and Applied Sciences (SEAS) demonstrated the ability to both excite and detect spin waves in a two-dimensional graphene magnet, but they couldn’t measure any of the wave’s specific properties.

Now, SEAS researchers have demonstrated a new way to measure the quintessential properties of spin waves in graphene. 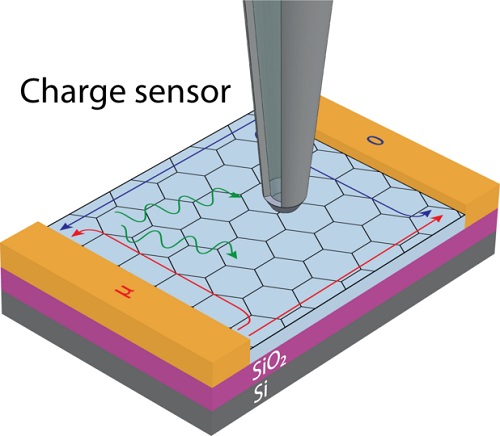 A charge sensor measuring the cost of electrons surfing on the spin wave (green wavy lines).

“In previous experiments, we only knew that we could generate spin waves, but we didn’t know anything about their properties in a quantitative way,” said Amir Yacoby, Professor of Physics and of Applied Physics at SEAS and senior author of the paper. “With this new work, we can determine all these quantitative numbers, including the energy and number of spin waves, their chemical potential, and temperature. This is an extremely important tool that we can use to explore new ways of generating magnons and get closer to achieving spin superfluidity.”

The research is published in Nature Physics.

In this case, Yacoby and his team used an electron surfer.

The researchers began with a quantum Hall ferromagnet. Quantum Hall ferromagnets are magnets made from 2D materials, in this case graphene, where all the electron spins are the same direction.  If an electron with a different spin is introduced into this system, it will use energy to try to flip the spins of its neighbors.

But the research team found that when they injected an electron with a different spin into the system and then generated spin waves, the energy the electron needed to flip its neighbors went down.

“It’s striking that somehow the electrons that we’re putting into the system are sensitive to the presence of spin waves,” said Andrew T. Pierce, a graduate student at SEAS and co-first author of the study. “It’s almost as it these electrons are grabbing onto the wave and using it to help flip the spins of their neighbors.”

“Spin waves don’t like to interact with anything but by using electrons and this energy cost as a proxy to probe the properties of a spin waves, we can determine the chemical potential, which combined with knowing the temperature and a few other properties, gives us a full description of the magnon,” said Yonglong Xie, a postdoctoral fellow at SEAS and co-first author of the study. “This is critical to knowing whether the wave is approaching the limit where it achieves superfluidity.”

The research could also provide a general approach to studying other hard-to-measure exotic systems, such as the recently discovered moiré materials which are expected to support a variety of waves like the spin wave studied in this work.

Kenji Watanabe, Takashi Taniguchi and Bertrand I. Halperin. It was supported in part by the U.S. Department of Energy, Basic Energy Sciences Office, Division of Materials Sciences and Engineering under award DE-SC0001819, the Gordon and Betty Moore Foundation, and the National Science Foundation, under grant DMR-1231319.