Frequency microcombs are specialized light sources that can function as light-based clocks, rulers and sensors to measure time, distance and molecular composition with high precision. New Stanford research presents a novel tool for investigating the quantum characteristics of these sources.

Unlike the jumble of frequencies produced by the light that surrounds us in daily life, each frequency of light in a specialized light source known as a “soliton” frequency comb oscillates in unison, generating solitary pulses with consistent timing.

Each “tooth” of the comb is a different color of light, spaced so precisely that this system is used to measure all manner of phenomena and characteristics. Miniaturized versions of these combs – called microcombs – that are currently in development have the potential to enhance countless technologies, including GPS systems, telecommunications, autonomous vehicles, greenhouse gas tracking, spacecraft autonomy and ultra-precise timekeeping. 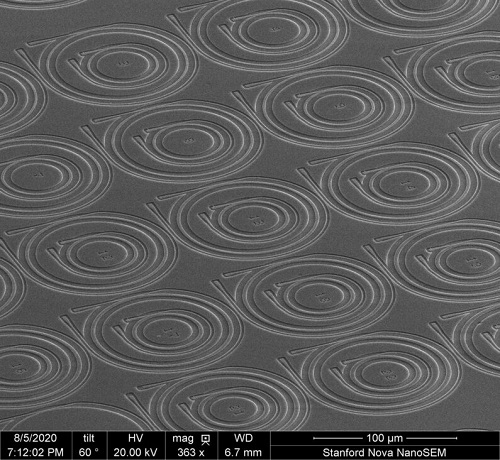 The silicon carbide microrings developed by the Vučković Lab, as seen through a scanning electron microscope at the Stanford Nano Shared Facilities.

The lab of Stanford University electrical engineer Jelena Vučković only recently joined the microcomb community. “Many groups have demonstrated on-chip frequency combs in a variety of materials, including recently in silicon carbide by our team. However, until now, the quantum optical properties of frequency combs have been elusive,” said Vučković, the Jensen Huang Professor of Global Leadership in the School of Engineering and professor of electrical engineering at Stanford. “We wanted to leverage the quantum optics background of our group to study the quantum properties of the soliton microcomb.”

While soliton microcombs have been made in other labs, the Stanford researchers are among the first to investigate the system’s quantum optical properties, using a process that they outline in a paper published Dec. 16 in Nature Photonics. When created in pairs, microcomb solitons are thought to exhibit entanglement – a relationship between particles that allows them to influence each other even at incredible distances, which underpins our understanding of quantum physics and is the basis of all proposed quantum technologies. Most of the “classical” light we encounter on a daily basis does not exhibit entanglement.

“This is one of the first demonstrations that this miniaturized frequency comb can generate interesting quantum light – non-classical light – on a chip,” said Kiyoul Yang, a research scientist in Vučković’s Nanoscale and Quantum Photonics Lab and co-author of the paper. “That can open a new pathway toward broader explorations of quantum light using the frequency comb and photonic integrated circuits for large-scale experiments.”

Proving the utility of their tool, the researchers also provided convincing evidence of quantum entanglement within the soliton microcomb, which has been theorized and assumed but has yet to be proven by any existing studies.

“I would really like to see solitons become useful for quantum computing because it’s a highly studied system,” said Melissa Guidry, a graduate student in the Nanoscale and Quantum Photonics Lab and co-author of the paper. “We have a lot of technology at this point for generating solitons on chips at low power, so it would be exciting to be able to take that and show that you have entanglement.” 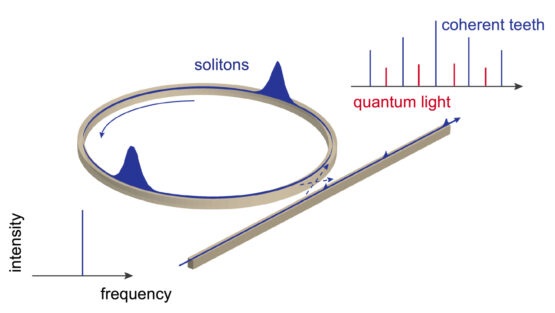 Conceptual diagram of the frequency comb and the microring, with solitons, that produces it. The frequency comb diagram shows both the coherent light teeth and the quantum light between those teeth.

Former Stanford physics professor Theodor W. Hänsch won the Nobel Prize in 2005 for his work on developing the first frequency comb. To create what Hänsch studied requires complicated, tabletop-sized equipment. Instead, these researchers chose to focus on the newer, “micro” version, where all of the parts of the system are integrated into a single device and designed to fit on a microchip. This design saves on cost, size and energy.

To create their miniature comb, the researchers pump laser light through a microscopic ring of silicon carbide (which was painstakingly designed and fabricated using the resources of the Stanford Nano Shared Facilities and Stanford Nanofabrication Facilities). Traveling around the ring, the laser builds up intensity and, if all goes well, a soliton is born.

“It’s fascinating that, instead of having this fancy, complicated machine, you can just take a laser pump and a really tiny circle and produce the same sort of specialized light,” said Daniil Lukin, a graduate student in the Nanoscale and Quantum Photonics Lab and co-author of the paper. He added that generating the microcomb on a chip enabled a wide spacing between the teeth, which was one step toward being able to look at the comb’s finer details.

The next steps involved equipment capable of detecting single particles of the light and packing the micro-ring with several solitons, creating a soliton crystal. “With the soliton crystal, you can see there are actually smaller pulses of light in between the teeth, which is what we measure to infer the entanglement structure,” explained Guidry. “If you park your detectors there, you can get a good look at the interesting quantum behavior without drowning it out with the coherent light that makes up the teeth.”

Seeing as they were performing some of the first experimental studies of the quantum aspects of this system, the researchers decided to try to confirm a theoretical model, called the linearized model, which is commonly used as a shortcut to describe complex quantum systems. When they ran the comparison, they were astonished to find that the experiment matched the theory very well. So, while they have not yet directly measured that their microcomb has quantum entanglement, they have shown that its performance matches a theory that implies entanglement.

“The take-home message is that this opens the door for theorists to do more theory because now, with this system, it’s possible to experimentally verify that work,” said Lukin.

Microcombs in data centers could boost the speed of data transfer; in satellites, they could provide more precise GPS or analyze the chemical composition of far-away objects. The Vučković team is particularly interested in the potential for solitons in certain types of quantum computing because solitons are predicted to be highly entangled as soon as they are generated.

With their platform, and the ability to study it from a quantum perspective, the Nanoscale and Quantum Photonics Lab researchers are keeping an open mind about what they could do next. Near the top of their list of ideas is the possibility of performing measurements on their system that definitively prove quantum entanglement.