A magnetic field can be used to switch nanolasers on and off, shows new research from Aalto University. The physics underlying this discovery paves the way for the development of optical signals that cannot be disturbed by external disruptions, leading to unprecedented robustness in signal processing.

Lasers concentrate light into extremely bright beams that are useful in a variety of domains, such as broadband communication and medical diagnostics devices. About ten years ago, extremely small and fast lasers known as plasmonic nanolasers were developed. These nanolasers are  potentially more power-efficient than traditional lasers, and they have been of great advantage in many fields—for example, nanolasers have increased  the sensitivity of biosensors used in medical diagnostics.

So far, switching nanolasers on and off has required manipulating them directly, either mechanically or with the use of heat or light. Now, researchers have found a way to remotely  control nanolasers.

‘The novelty here is that we are able to control the lasing signal with an external magnetic field. By changing the magnetic field around our magnetic nanostructures, we can turn the lasing on and off,’ says Professor Sebastiaan van Dijken of Aalto University. 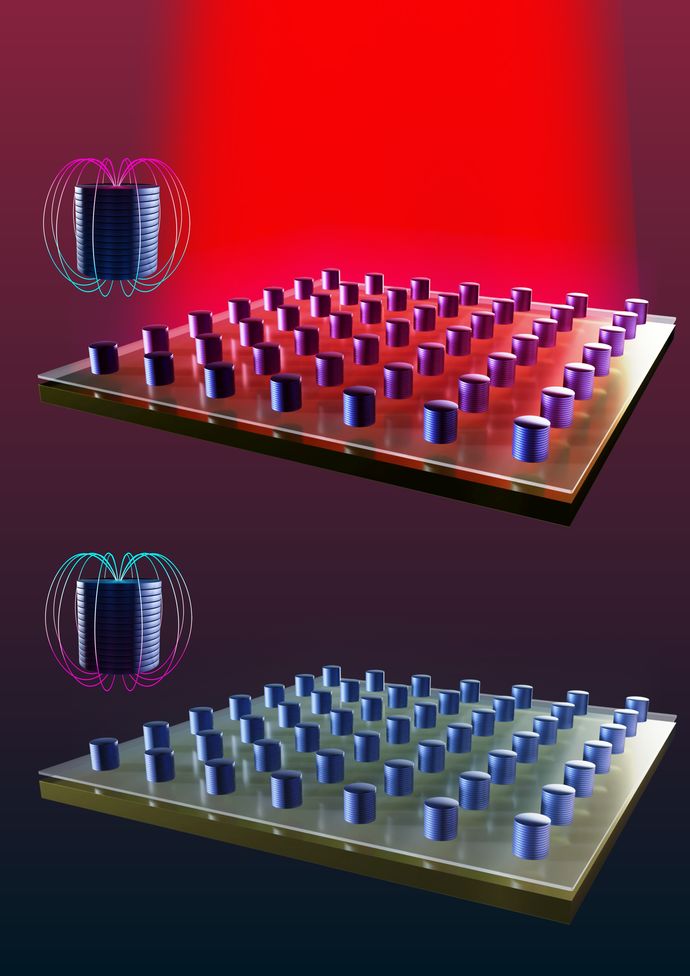 A plasmonic laser is turned on (top) and off (bottom) by switching the magnetisation of a nanodot array. The zoomed insets show the magnetic field around a single nanodot.

The team accomplished this by making plasmonic nanolasers from different materials than normal. Instead of the usual noble metals, such as gold or silver, they used magnetic cobalt-platinum nanodots patterned on a continuous layer of gold and insulating silicon dioxide. Their analysis showed that both the material and the arrangement of the nanodots in periodic arrays were required for the effect.

The new control mechanism may prove useful in a range of devices that make use of optical signals, but its  implications for the emerging field of topological photonics are even more exciting. Topological photonics aims to produce light signals that are not disturbed by external disruptions. This would have applications in many domains by providing very robust signal processing.

‘The idea is that you can create specific optical modes that are topological, that have certain characteristics which allow them to be transported and protected against any disturbance,’ explains van Dijken. ‘That means if there are defects in the device or because the material is rough, the light can just pass them by without being disturbed, because it is topologically protected.’

So far, creating topologically protected optical signals using magnetic materials has required strong magnetic fields. The new research shows that the effect of magnetism in this context can be unexpectedly amplified using a nanoparticle array of a particular symmetry. The researchers believe their findings could point the way to new, nanoscale, topologically protected signals.

‘Normally, magnetic materials can cause a very minor change in the absorption and polarization of light. In these experiments, we produced very significant changes in the optical response— up to 20 percent. This has never been seen before,’ says van Dijken.

Academy Professor Päivi Törmä adds that ‘these results hold great potential for the realization of topological photonic structures wherein magnetization effects are amplified by a suitable choice of the nanoparticle array geometry.’

The findings were published in Nature Photonics.