An innovative approach could turn nanoparticles into simple reservoirs for storing hydrogen. The highly volatile gas is considered a promising energy carrier for the future, which could provide climate-friendly fuels for airplanes, ships and lorries, for example, as well as allowing climate-friendly steel and cement production – depending on how the hydrogen gas is generated. However, storing hydrogen is costly: either the gas has to be kept in pressurised tanks, at up to 700 bar, or it must be liquified, which means cooling it down to minus 253 degrees Celsius. Both procedures consume additional energy.

A team led by DESY’s Andreas Stierle has laid the foundations for an alternative method: storing hydrogen in tiny nanoparticles made of the precious metal palladium, just 1.2 nanometres in diameter. The fact that palladium can absorb hydrogen like a sponge has been known for some time. “However, until now getting the hydrogen out of the material again has posed a problem,” Stierle explains. “That’s why we are trying palladium particles that are only about one nanometre across.” A nanometre is a millionth of a millimetre. 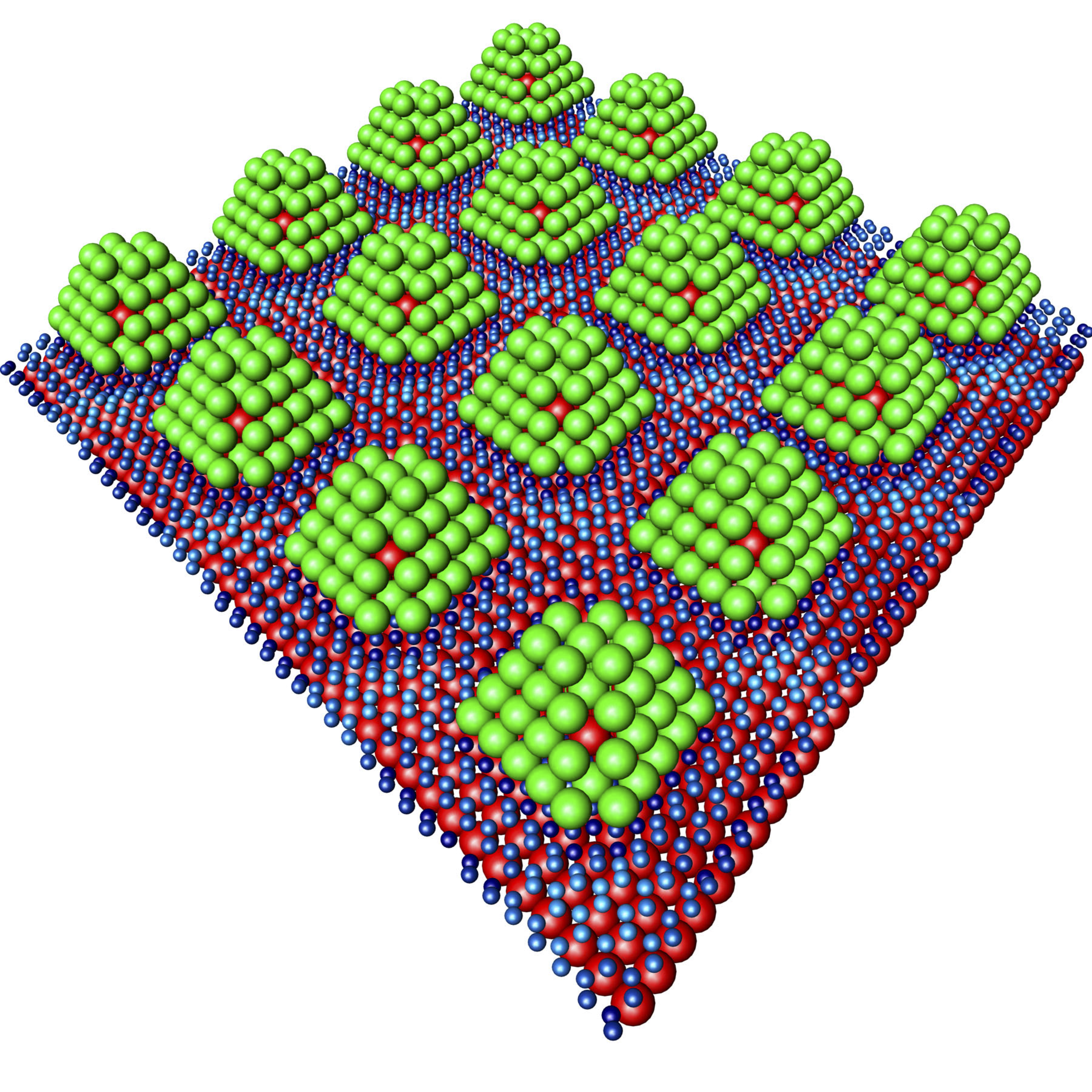 The palladium nanoparticles (green) are stabilised by a core of iridium (red). Hydrogen can accumulate on their surface like a kind of chocolate glaze - and can be released again by heating.

To ensure that the tiny particles are sufficiently sturdy, they are stabilised by a core made of the rare precious metal iridium. In addition, they are attached to a graphene support, an extremely thin layer of carbon. “We are able to attach the palladium particles to the graphene at intervals of just two and a half nanometres,” reports Stierle, who is the head of the DESY NanoLab. “This results in a regular, periodic structure.” The team, which also includes researchers from the Universities of Cologne and Hamburg, published its findings in the American Chemical Society (ACS) journal ACS Nano.

DESY’s X-ray source PETRA III was used to observe what happens when the palladium particles come into contact with hydrogen: essentially, the hydrogen sticks to the nanoparticles' surfaces, with hardly any of it penetrating inside. The nanoparticles can be pictured as resembling chocolates: an iridium nut at the centre, enveloped in a layer of palladium, rather than marzipan, and chocolate-coated on the outside by the hydrogen. All it takes to recover the stored hydrogen is for a small amount of heat to be added; the hydrogen is rapidly released from the surface of the particles, because the gas molecules don’t have to push their way out from inside the cluster.

“Next, we want to find out what storage densities can be achieved using this new method,” says Stierle. However, some challenges still need to be overcome before proceeding to practical applications. For example, other forms of carbon structures might be a more suitable carrier than graphene – the experts are considering using carbon sponges, containing tiny pores. Substantial amounts of the palladium nanoparticles should fit inside these.