What is Internet of Nano Things?

Internet of Things (IoT) is a popular topic in the current 4.0 revolution. Nanotechnology is the same, I trust you have at least read or heard the two phrases above. What about the Internet of Nano Things, a combination of IoT and Nano is something to look forward to.

1. What are nano things?

First, we need to understand the concept of nano things. It are all things made from nanomaterials. Nano is the name taken from the nanometer unit (1nm = 10-9 m), indicating that the size of nanomaterials is extremely small like cells in biology. These materials often have granular, fibrous, or sheet-like structures, and are being used more and more in daily life. Typical examples of nano things are nanoelectronic devices, superconductors in electrical loads, sensors in medicine, etc.

Nano things are created from nanotechnology, which started with scientists at the Massachusetts Institute of Technology (MIT) in the 80s of the last century. This technology includes a variety of physical and chemical methods to fabricate nanomaterials, typically wet chemical, mechanical and thermal evaporation methods. Over nearly half a century, scientists have also created many new methods and made nanomaterials more and more useful for human life. Industrial nanoproducts are growing exponentially, especially in the medical and food industries.

Basically, the Internet of Nano Things (IoNT) is the IoT system of nanodevices. These devices range in size from 0.1 to 100 nanometers, to show how small the image is, we use the comparison with the thickness of a sheet of paper, and the paper is 100000 nanometers thick! Because of their ability to connect with each other and connect to the Internet, these devices must be designed with great sophistication. In addition, they also have high durability to be able to withstand pressure from the environment. And the scale of the IoNT system is also smaller than that of the IoT due to the limited signal transmission capacity, usually within a single facility such as a school or a healthcare facility for the elderly.

Recalling IoT, this system is a collection of interconnected sensors, self-collecting and transmitting data to each other via the cloud. Today, systems are integrated with modern technologies such as machine learning, AI, and Big data to help process data and make decisions on their own without human intervention. The Internet of Nano Things also works according to the same mechanism as above, but the ability to collect data is much better. Sensors in the system with small sizes can be collected anywhere the user wants. These components communicate with each other in two ways: electromagnetic waves and encoded molecules that store information within them.

An IoNT system has four basic components: the nano router, the interface device, the nano nodes, and the receiving port. The nano nodes are the sensors introduced above, and the routers help identify the nodes and control the communication between the nodes before sending this data to the interface device. The ports have the function of controlling access to the system and from the system to the Internet. IoT and nanotechnology are the leading trends in the current technology revolution, promising that many improvements will explode shortly.

3. Application of Internet of Nano Things.

Internet of Nano Things, as well as the Internet of Things, is still a potential field. The point system is especially useful in a small area such as a factory or medical facility. IoNT technology helps monitor emissions, temperature, and humidity in the tiniest corners of a plant. Or build a system to monitor water quality as well as monitor vehicle emissions. The sensors in the IoNT are capable of creeping into the tiniest corners, helping to collect data much more accurately than conventional IoT devices. IoNT is also used in the food industry. Sensors help monitor and control food quality, measure production and storage times.

Especially IoTN has great applications in the medical field. Nanosensors installed in the patient’s body help collect health data and give an alert if there is an abnormality. IoTN makes a breakthrough in the field of healthcare when doctors can monitor patients in real-time instead of having to measure manually as before. Nano things also help detect viruses and bacteria and alert both doctors and patients. 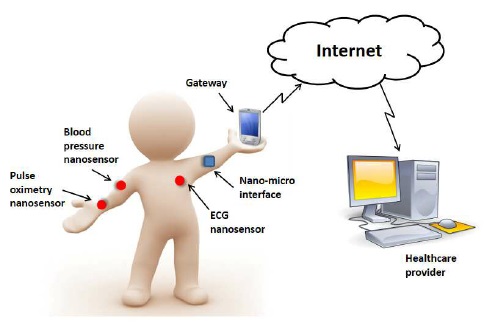 The most typical application of IoNT in the field of health.

Hopefully, you have understood more about a very good concept, the Internet of Nano Things through the above article. Technology is developing constantly making the world more and more developed. IoT and Nano in the future will be at the forefront of development, which is predicted to peak in the next one to two decades.

Read the original article on Speranza.