3D holograms, previously seen only in science fiction movies, may soon make their way into our daily lives. Until now, 3D holograms based on phase shifting holography method could be captured using a large, specialized camera with a polarizing filter. However, a Korean research group has just developed technology that can acquire holograms on mobile devices, such as smartphones.

The Korea Institute of Science and Technology (KIST, Director Seok-jin Yoon) recently announced that a research team led by Dr. Min-Chul Park and Dr. Do Kyung Hwang of the Center for Opto-Electronic Materials and Devices, in collaboration with a research team led by Prof. Seongil Im of the Department of Physics at Yonsei University, was successful in developing a photodiode that detects the polarization of light in the near-infrared region without additional polarization filters and thus, the realization of a miniaturized holographic image sensor for 3D digital holograms, using the 2D semiconductor materials: rhenium diselenide and tungsten diselenide. 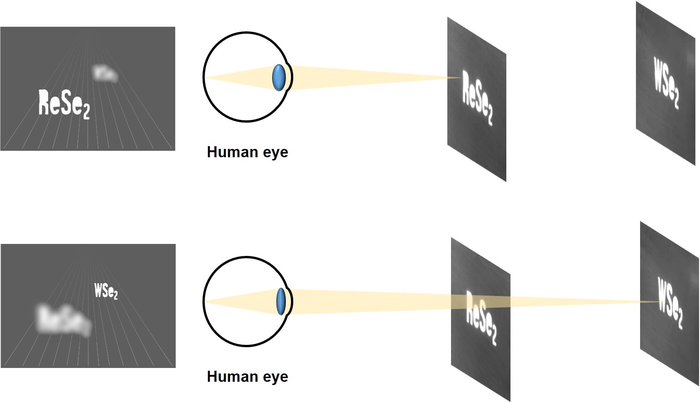 Hologram implemented with two-dimensional semiconductor WSe2/ReSe2, which is a polarization-sensing photodiode, ReSe2 on the front and WSe2 on the back are imaged in three-dimensional space

Photodiodes, which convert light into current signals, are essential components within the pixels of image sensors in digital and smartphone cameras. Introducing the ability to sense the polarization of light to the image sensor of an ordinary camera provides a variety of new information, enabling the storage of 3D holograms. Previous polarization-sensing cameras have an additional polarization filter, several hundred micrometers in size, attached to an ultra-small optical diode image sensor, less than a micrometer in size. Thus, they could not be implemented into portable electronic devices because of their inability to be integrated and miniaturized.

The research group developed a photodiode by stacking an n-type semiconductor, rhenium diselenide, which exhibits a difference in light absorption dependent on the linear polarization angle of light in the near-infrared (980 nm) region, and a p-type semiconductor, tungsten diselenide, which exhibits no difference in photo-response dependent on polarization, but enables superior performance. The device is excellent in the photodetection of various wavelengths from ultraviolet to near-infrared, even capable of selectively detecting the polarization characteristics of light in the near-infrared region. The research group utilized the device to create a digital holographic image sensor that records polarization characteristics to successfully capture holograms.

Dr. Hwang of KIST said, "Research on the downsizing and integration of individual elements is required to ultimately miniaturize holographic systems. The results of our research will lay the foundation for the future development of miniaturized holographic camera sensor modules." In addition, Dr. Park remarked, "The new sensor can further detect near-infrared light, as well as previously undetectable visible light, opening up new opportunities in various fields such as 3D night vision, self-driving, biotechnology, and near-infrared data acquisition for analyzing and restoring cultural assets."