It plays a fundamental role in human existence and is a major component of our universe, yet there are still things we don't understand about water. To address the knowledge gaps, a collaborative team of Institute of Industrial Science, The University of Tokyo, Kyoto University, and Tohoku University investigated electron transport through a single water molecule in a C60 cage. Their findings are published in Nano Letters.

Simple systems are often the best starting point for determining complex information. A single water molecule is one such system. Made up of just three atoms, it provides an excellent model for establishing quantum mechanical information.

Introducing a water molecule into a C60 cage--a soccer ball-shaped molecule made entirely of carbon atoms--gives [email protected] and is an excellent way of isolating water for investigation. The researchers achieved this using "molecular surgery", which involves opening the cage, injecting water, and closing the cage again.

[email protected] was then used as a single molecule transistor (SMT) by mounting one [email protected] molecule in the very small gap--less than 1 nm--between two gold electrodes. Because the electric current then passes through the isolated molecule only, the electron transport can be studied with high specificity. 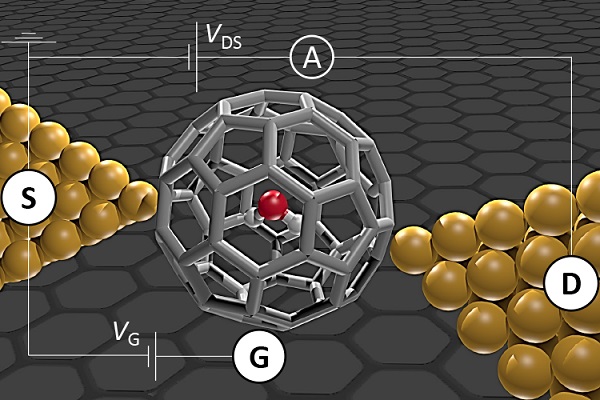 "Because it contains two hydrogen atoms, water has two different nuclear spin states: ortho- and para-water. In ortho-water the hydrogen nuclear spins are in the same direction, while in para-water they are opposite to one another," explains study lead author Shaoqing Du. "Understanding the transition between these two types of water is an important area of research."

The researchers measured tunneling spectra for the [email protected] system and, by comparing the findings with theoretical calculations, were able to attribute the measured conductance peaks to rotational and vibrational excitations of the water molecule. They also investigated [email protected] using terahertz spectroscopy and the results agreed with the tunneling spectroscopy data.

Both techniques showed quantum rotational excitations of ortho- and para-water simultaneously. This demonstrates that the single water molecule transitioned between the two nuclear isomers (ortho- and para-water) within the timeframe of the experiment, which was approximately one minute.

"Our findings make an important contribution to the understanding of ortho-para fluctuation in water molecules," says study corresponding author Kazuhiko Hirakawa. "Because water plays such an important role in chemistry and biology, and even in understanding our universe, we expect our findings to have a wide-ranging impact."

Read the original article on Institute of Industrial Science (IIS), University of Tokyo.