Study reveals why some attempts to convert the greenhouse gas into fuel have failed, and offers possible solutions.

If researchers could find a way to chemically convert carbon dioxide into fuels or other products, they might make a major dent in greenhouse gas emissions. But many such processes that have seemed promising in the lab haven’t performed as expected in scaled-up formats that would be suitable for use with a power plant or other emissions sources.

Now, researchers at MIT have identified, quantified, and modeled a major reason for poor performance in such conversion systems. The culprit turns out to be a local depletion of the carbon dioxide gas right next to the electrodes being used to catalyze the conversion. The problem can be alleviated, the team found, by simply pulsing the current off and on at specific intervals, allowing time for the gas to build back up to the needed levels next to the electrode. 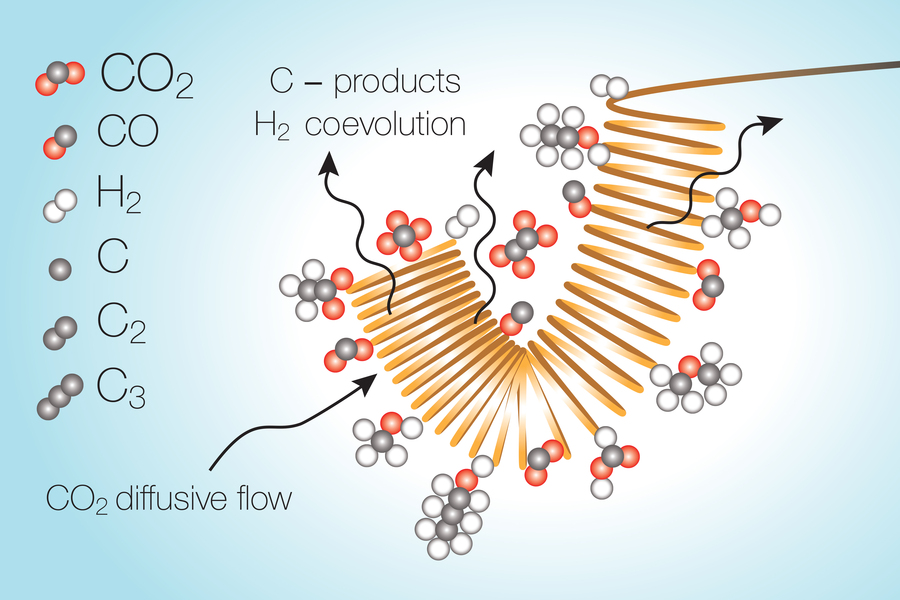 MIT researchers have identified a problem that tends to limit chemical processes for turning carbon dioxide into fuel or other useful chemicals — and ways of addressing that problem.

The findings, which could spur progress on developing a variety of materials and designs for electrochemical carbon dioxide conversion systems, were published today in the journal Langmuir, in a paper by MIT postdoc Álvaro Moreno Soto, graduate student Jack Lake, and professor of mechanical engineering Kripa Varanasi.

“Carbon dioxide mitigation is, I think, one of the important challenges of our time,” Varanasi says. While much of the research in the area has focused on carbon capture and sequestration, in which the gas is pumped into some kind of deep underground reservoir or converted to an inert solid such as limestone, another promising avenue has been converting the gas into other carbon compounds such as methane or ethanol, to be used as fuel, or ethylene, which serves as a precursor to useful polymers.

There are several ways to do such conversions, including electrochemical, thermocatalytic, photothermal, or photochemical processes. “Each of these has problems or challenges,” Varanasi says. The thermal processes require very high temperature, and they don’t produce very high-value chemical products, which is a challenge with the light-activated processes as well, he says. “Efficiency is always at play, always an issue.”

The team has focused on the electrochemical approaches, with a goal of getting “higher-C products” — compounds that contain more carbon atoms and tend to be higher-value fuels because of their energy per weight or volume. In these reactions, the biggest challenge has been curbing competing reactions that can take place at the same time, especially the splitting of water molecules into oxygen and hydrogen.

The reactions take place as a stream of liquid electrolyte with the carbon dioxide dissolved in it passes over a metal catalytic surface that is electrically charged. But as the carbon dioxide gets converted, it leaves behind a region in the electrolyte stream where it has essentially been used up, and so the reaction within this depleted zone turns toward water splitting instead. This unwanted reaction uses up energy and greatly reduces the overall efficiency of the conversion process, the researchers found.

“There’s a number of groups working on this, and a number of catalysts that are out there,” Varanasi says. “In all of these, I think the hydrogen co-evolution becomes a bottleneck.”

One way of counteracting this depletion, they found, can be achieved by a pulsed system — a cycle of simply turning off the voltage, stopping the reaction and giving the carbon dioxide time to spread back into the depleted zone and reach usable levels again, and then resuming the reaction.

Often, the researchers say, groups have found promising catalyst materials but haven’t run their lab tests long enough to observe these depletion effects, and thus have been frustrated in trying to scale up their systems. Furthermore, the concentration of carbon dioxide next to the catalyst dictates the products that are made. Hence, depletion can also change the mix of products that are produced and can make the process unreliable. “If you want to be able to make a system that works at industrial scale, you need to be able to run things over a long period of time,” Varanasi says, “and you need to not have these kinds of effects that reduce the efficiency or reliability of the process.”

The team studied three different catalyst materials, including copper, and “we really focused on making sure that we understood and can quantify the depletion effects,” Lake says. In the process they were able to develop a simple and reliable way of monitoring the efficiency of the conversion process as it happens, by measuring the changing pH levels, a measure of acidity, in the system’s electrolyte.

In their tests, they used more sophisticated analytical tools to characterize reaction products, including gas chromatography for analysis of the gaseous products, and nuclear magnetic resonance characterization for the system’s liquid products. But their analysis showed that the simple pH measurement of the electrolyte next to the electrode during operation could provide a sufficient measure of the efficiency of the reaction as it progressed.

This ability to easily monitor the reaction in real-time could ultimately lead to a system optimized by machine-learning methods, controlling the production rate of the desired compounds through continuous feedback, Moreno Soto says.

Now that the process is understood and quantified, other approaches to mitigating the carbon dioxide depletion might be developed, the researchers say, and could easily be tested using their methods.

This work shows, Lake says, that “no matter what your catalyst material is” in such an electrocatalytic system, “you’ll be affected by this problem.” And now, by using the model they developed, it’s possible to determine exactly what kind of time window needs to be evaluated to get an accurate sense of the material’s overall efficiency and what kind of system operations could maximize its effectiveness.

The research was supported by Shell, through the MIT Energy Initiative.