A new kind of tiny particle is a big deal in UO chemist Carl Brozek’s lab. He and his team have made a versatile kind of porous material called a metal-organic framework, or MOF, into nanocrystals—a form that’s easier to use beyond the lab. Nanoparticles such as these have a wide range of potential applications, from surface coatings that can store electric charge, to filters that remove contaminants from air or water.

The nanocrystals are the smallest and most stable MOFs made yet, said Brozek. And they have an array of interesting properties—notably, they can conduct electricity, and they behave differently depending on the exact size of the particle.

“It really feels like we’ve cracked into something new,” Brozek said. He and his team, led by graduate student Checkers Marshall, reported their advance November 24 in a pre-print posted to the research site ChemRxiv.

MOFs are sponge-like materials made up of metal ions, such as iron or zinc, linked together with small carbon-based molecules. Like a holey block of swiss cheese, MOFs have pockets and crevices that give them an extremely high surface area.

That makes them useful for applications that involve capturing specific molecules, like carbon dioxide from the atmosphere or lead in drinking water, because there’s lots of space for those target molecules to stick on. And making them nano-sized would be particularly practical for scaling up and using industrially, because the tiny particles could be suspended in a solution and then, like paint, used to evenly coat a surface. 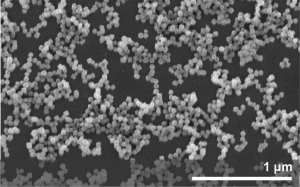 But making MOFs as nanoparticles has been an ongoing challenge, Brozek said. So his lab came up with a workaround. “As the MOF tries to grow, we trick it,” he said.

MOFs form via a series of chemical reactions that join metal ions with linker molecules. Brozek’s team added a third ingredient: molecules that mimic the linkers, but that can only bind to something on one end. Like edge pieces on a jigsaw puzzle, they act like dead-ends for the growing MOF, ensuring it stays small.

“One of the really exciting things about our paper is, not only did we make this particular MOF as a nanocrystal, it’s also one of the smallest MOFs that’s ever been made,” Brozek said.

These nanoparticles, made of iron triazolate, are adaptable: they behave differently at different sizes and even at different temperatures. That opens up a range of possibilities, Brozek said — scientists could “tune” the materials to behave a certain way, by adjusting the size of the nanoparticles or the temperature of the environment. And they could use a similar approach to design other MOF nanocrystals with different combinations of metal ions and linker molecules.

“The work is pretty fundamental right now,” Marshall said. “I think the most important things are that we're capable of synthesizing these nanoparticles and they show size-dependent properties that haven't been observed before. These two developments will help adapt how we apply MOFs in existing devices as well as harness their size-dependence in future technologies.”

Brozek and his team are already exploring potential applications, both for iron triazolate nanoparticles and other variations.

“Now that we can make a film out of these materials, there’s a real possibility that we’d be able to make membranes that are useful in the real world,” Brozek said. For example, MOF nanoparticles coating a surface could grab onto carbon dioxide molecules that would otherwise be released into the atmosphere. Or the particles could be engineered to stick to contaminants in water.

“This is just one MOF,” Brozek said. “It’s going to take lots of labs to explore this whole new field of science.”

Read the original article on University of Oregon.