For Sustainable Sulfur-tolerant Catalysts, Alloy the Precious Metals with Phosphorus!

Researchers from Osaka University develop a highly active and durable metal-phosphide catalyst for the deoxygenation of sulfoxides.

Catalysts play crucial roles in chemical processes. However, many conventional catalysts have suffered from deactivation caused by sulfur-containing molecules which are strongly absorbed onto catalyst surfaces and suppress catalytic reactions. Osaka University researchers have developed a highly active and durable metal-phosphide catalyst for the deoxygenation of sulfoxides. The developed catalyst has a high durability against sulfur-poisoning in contrast with the conventional metal catalysts. Their findings are published in JACS Au.

Transformation of sulfur-containing molecules is a fundamental and significant reaction in organic and pharmaceutical chemistry. However, the sulfur atom strongly coordinates with the active sites of metal catalysts, significantly decreasing the catalytic performance. Sulfur impurities contained in chemical feedstocks also cause catalyst deactivation. Therefore, the development of a new sulfur-tolerant and highly active catalyst is desired. 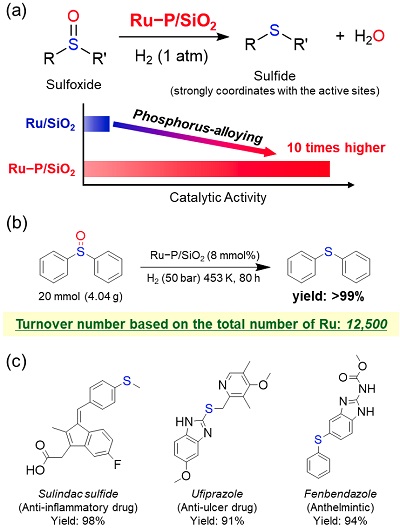 Ru−P/SiO2 achieved the highest turnover number (12,500) reported to date (Fig. 1b). This catalyst shows wide substrate applicability and can deoxygenate structurally complex drug intermediates to produce bioactive sulfides such as sulindac sulfide (anti-inflammatory drug), ufiprazole (anti-ulcer drug), and fenbendazole (anthelmintic) in high yields (Fig. 1c). Moreover, Ru−P/SiO2 can promote sulfoxide deoxygenation even in the presence of a lot of sulfur-containing molecules; even in the presence of 200 equiv. of sulfide per ruthenium, Ru−P/SiO2 quantitatively promoted the deoxygenation of sulfoxide, while the conventional ruthenium nanoparticle catalyst (Ru/SiO2) was completely deactivated (Fig. 2). 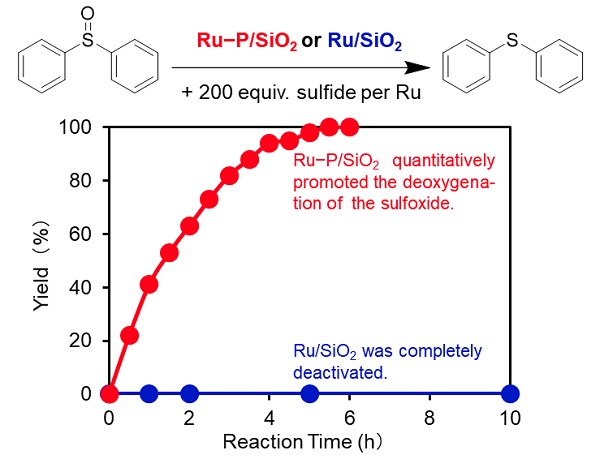 Fig. 2. Catalytic performances of Ru−P/SiO2 and Ru/SiO2 for the sulfoxide deoxygenation in the presence of sulfide.

“We expect that our metal phosphide catalyst will make a significant contribution to a lot of chemical processes, which suffered from catalyst deactivation caused by sulfur,” says study corresponding author Takato Mitsudome. “But beyond this, we believe phosphorus-alloying can be a powerful method for designing highly active and durable metal nanoparticle catalysts for a variety of organic syntheses.”

Carbon Nanochemistry Written in the Stars

A Better Way to Separate Gases