Tiny gas bubbles could help reduce drag in small medical devices, university scientists have found. Drag can lead to clogging and damage biological samples, so this discovery could pave the way to more robust devices.

Researchers from the University of Sydney Nano Institute and School of Chemistry have revealed that tiny gas bubbles – nanobubbles just 100 billionths of a metre high – form on surfaces in unexpected situations, providing a new way to reduce drag in small-scale devices.

Liquid drag within microdevices can lead to internal biofouling (accumulation of unwanted biological materials) or damage biological samples such as cells, due to high pressure. So, the discovery could pave the way to the development of better medical diagnostic tools, such as lab-on-a-chip devices that undertake DNA analysis or are used for biomedical detection of disease pathogens – including PCR tests.

The team, led by Professor Chiara Neto, developed nanoengineered wrinkled coatings that reduce drag by up to 38 percent compared with nominally ‘smooth’ solid surfaces. The slippery coatings, once infused with a lubricant, are also highly resistant to biofouling. 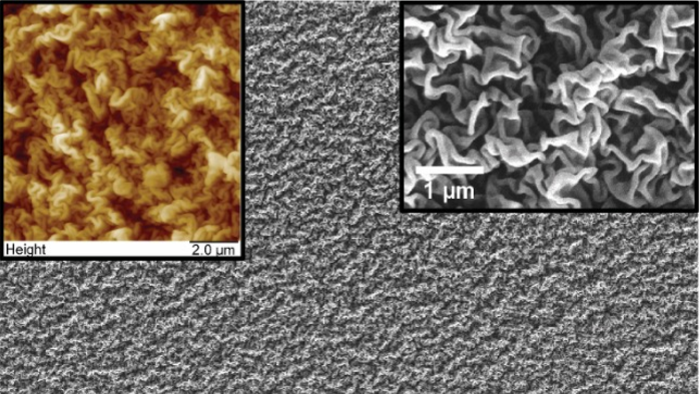 Nanostructured wrinkled Teflon surfaces were developed by the team to effectively trap a lubricating layer.

Using atomic-force microscopy – a very high-resolution scanning microscope – the team discovered that the fluids passing through micro-structured channels with these surfaces were able to slip through with lower friction due to the spontaneous formation of nanobubbles, a phenomenon never before described.

The results are published this week in Nature Communications.

Many medical diagnostic tools rely on the small-scale analysis of tiny amounts of biological and other materials in liquid form. These ‘microfluidic devices’ use microchannels and microreactors in which reactions usually done on a large scale in a chemistry or pathology lab are conducted at a miniaturised scale.

Analysing much smaller volumes of material enables faster and more efficient diagnostics. However, the problem with microfluidic devices is that the fluid flow is dramatically slowed down by the friction of the liquid with the solid walls of the channels, creating a large hydrodynamic drag. To overcome this, the devices apply high pressures to drive the flow.

In turn, the high pressure inside these devices is not only inefficient but can also damage delicate samples in the device, such as cells and other soft materials. Further, the solid walls easily become fouled by biological molecules or bacteria, leading to fast degradation through biofouling.

A solution to both these problems is by using surfaces in which nanoscale pores trap small amounts of a lubricant, forming a slippery liquid interface, which reduces hydrodynamic drag and prevents surface fouling.

In effect, liquid-infused surfaces replace the solid wall with a liquid wall, allowing the flow of a second liquid with lower friction, requiring lower pressure. However, the mechanism by which these liquid-infused surfaces work has not been understood, as the reduction of friction that these surfaces offer has been reported to be 50 times larger than would be expected based on theory.

Nanobubbles to the rescue?

Professor Neto and her team have described how they formed liquid-infused walls on their microfluidic devices, by developing nanoengineered wrinkled coatings that reduce drag by up to 38 percent compared to solid walls. The team includes: PhD student Chris Vega-Sánchez, whose work over the past three years focused on microfluidics; Dr Sam Peppou-Chapman, an expert in liquid-infused surfaces; and Dr Liwen Zhu, an expert in atomic force microscopy, which gives scientists the ability to see down to a billionth of a metre. 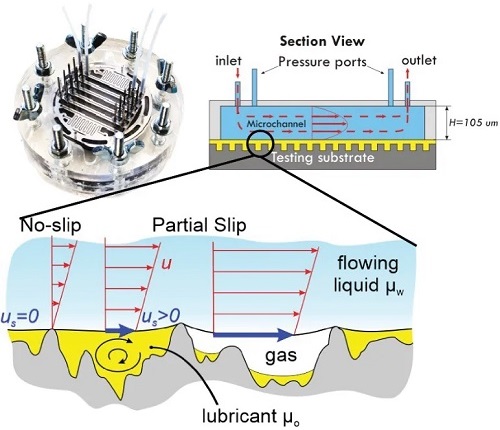 When the surfaces were studied within microfluidic devices, it was revealed their ability to greatly reduce hydrodynamic drag is due to the spontaneous formation of nanobubbles.

Conducting microfluidic measurements, the team revealed that the new slippery surfaces reduced drag relative to solid surfaces to a degree that would be expected only if the surface was infused with air rather than a viscous lubricant. Not satisfied with the successful drag reduction, the team worked to demonstrate the mechanism by which the surfaces induced slip.

They did this by scanning the surfaces underwater using atomic-force microscopy, enabling them to image the spontaneous formation of nanobubbles, only 100 nanometres high on the surface. Their presence quantitatively explains the huge slip observed in microfluidic flow.

Part of the microscopy work was done using the facilities of the Australian Centre for Microscopy & Microanalysis at the University of Sydney.

Professor Neto said: “We want to understand the fundamental mechanism by which these surfaces work and to push the boundaries of their application, especially for energy efficiency. Now that we know why these surfaces are slippery and drag-reducing, we can design them specifically to minimise the energy required to drive flow in confined geometries and reduce fouling.”

Read the original article on University of Sydney.

Seeing Molecules Inside a Nanometer-sized “Sardine Can”!