It may be true that seeing is believing, but sometimes hearing can be better.

Two brothers in a Rice University laboratory heard something unusual while making graphene. Ultimately, they determined the sound itself could give them valuable data about the product.

The brothers, John Li, a Rice alumnus now studying at Stanford University, and Victor Li, then a high school student in New York and now a freshman at the Massachusetts Institute of Technology, are co-lead authors of a paper that describes the real-time analysis of laser-induced graphene (LIG) production through sound.

The brothers were working in the lab of Rice chemist James Tour when they came up with their hypothesis and presented it at a group meeting.

“Professor Tour said, ‘It is interesting,’ and told us to pursue it as a potential project,” John Li recalled.

The results, which appear in Advanced Functional Materials, describe a simple acoustic signal processing scheme that analyzes LIG in real time to determine its form and quality.

LIG, introduced by the Tour lab in 2014, makes layers of interconnected graphene sheets by heating the top of a thin polymer sheet to 2,500 degrees Celsius (4,532 degrees Fahrenheit), leaving only carbon atoms behind. The technique has since been applied to making graphene from other feedstock, even food.

“Under different conditions, we hear different sounds because different processes are occurring,” John said. “So if we hear variations during the synthesis, we’d be able to detect different materials being formed.”

He said audio analysis allows for “far greater quality control capabilities that are orders of magnitude faster than characterization of laser-induced graphene by microscopy techniques.

“In materials analysis, there are often tradeoffs between cost, speed, scalability, accuracy and precision, especially in terms of how much material you can systematically process,” John said. “What we have here allows us to efficiently scale the throughput of our analytical capabilities to the entire amount of material we’re trying to synthesize in a robust manner.”

John invited his younger brother to Houston, knowing his expertise would be a plus in the lab. “We have complementary skill sets almost by design, where I avoid specializing in the things that he knows very well, and likewise, he avoids areas that I know very well,” he said. “So we form a very solid team.

A small, $31 microphone from Amazon taped to the laser head and attached to a cellphone inside the laser cabinet picks up the audio for analysis.

“The brothers converted the sound pattern through a mathematical technique called a Fast Fourier transform, so they could get numerical data from the sound data,” Tour said. “Through some mathematical computations, that data can be a near-instant analytical tool to assess the product type and purity.”

John Li said the sounds emitted “provide information on the relaxation of the energy input when the laser hits the sample and gets absorbed, transmitted, scattered, reflected or just in general converted into different types of energy. That allows us to get local information on properties of the graphene’s microstructure, morphology and nanoscale characteristics.” 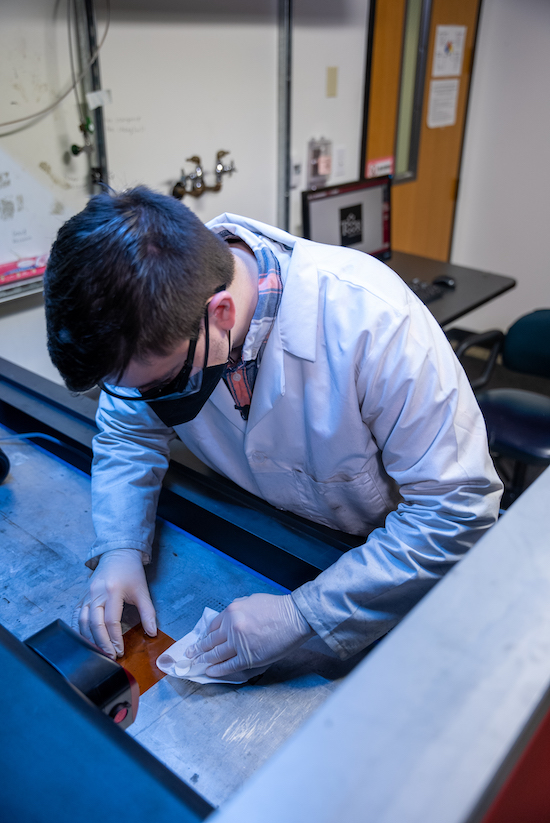 Alex Lathem, an applied physics graduate student at Rice, prepares a sample for lasing. The lab is using sound to analyze the synthesis of laser-induced graphene in real time.

Tour remains impressed by their ingenuity.

“What these brothers came up with is amazing,” he said. “They are hearing the sounds of synthesis as it is performed, and from that they can determine product type and quality near-instantaneously. This could be an important approach during synthesis to guide manufacturing parameters.”

He said sound analysis could contribute to a number of manufacturing processes, including his own lab’s flash Joule heating, a method to make graphene and other materials from waste products, as well as sintering, phase engineering, strain engineering, chemical vapor deposition, combustion, annealing, laser-cutting, gas evolution, distillation and more.

“Between John’s experimental expertise and Victor’s mathematical talent, the family team is formidable,” Tour said. “My greatest joy is to provide an atmosphere where young minds can create and flourish, and in this case, they demonstrated expertise way beyond their years, John being only 19 and Victor 17 at the time of their discovery.”