A team of researchers from the Pohang University of Science and Technology and the Korean Institute for Basic Science has demonstrated deep-ultraviolet (DUV) electroluminescence and photocurrent generation in hexagonal boron nitride, a semiconductor often called the ‘white graphene.’

“Unlike visible light, ultraviolet (UV) light can destroy or alter the form of a material,” said senior author Professor Jonghwan Kim and colleagues. 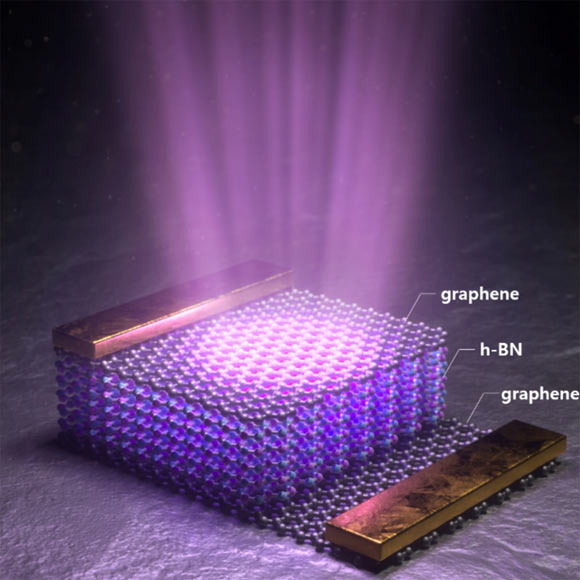 “Among UV lights, the near-UV light has high penetration depth and can cause diseases when the skin is exposed to it.”

“However, DUV light (200-280 nm) has extremely low skin penetrability and is anticipated to be safely used,” they added.

“However, this material has a fundamental limitation in that its electroluminescence rapidly deteriorates as the wavelength becomes shorter and fabricating LEDs that can be used in the DUV frequencies remains a challenge.”

“However, it has been difficult to inject electrons and holes due to its large bandgap, rendering it difficult to make into an LED,” the authors said.

“With this, we successfully fabricated an LED device based on a van der Waals heterostructure stacked with graphene, hexagonal boron nitride, and graphene.”

“The development of a new high-efficiency LED material in a new frequency can be the starting point for pioneering groundbreaking optical device applications that have never been seen before,” Professor Kim said.

“It is significant that this study presented the first demonstration of a deep-ultraviolet LED based on hexagonal boron nitride.”

“Compared to the conventional AlxGa1-xN material, the new material has significantly higher efficiency of luminescence and enables miniaturization.”

“It is anticipated to be highly applicable in viral and bacterial sterilization systems, semiconductor device manufacturing processes, and short-range wireless communication in the future.”

Read the original article on Sci-News.