Stirring A Superfluid with A Laser

Researchers at Osaka University use optical tweezers to control nanoparticles within an ultracold phase of matter called superfluid helium, which may lead to a better understanding of the interactions between quantum and macroscopic objects

Scientists from the Graduate School of Engineering Science at Osaka University used optical tweezers for the first time inside superfluid helium. With a strongly focused beam of light, they demonstrated the stable trapping of nanoparticles at ultralow temperatures. This work may help scientists better understand the conceptual boundary that separates classical and quantum effects.

Studying the strange world of quantum mechanics is often difficult, because some of the most interesting phenomena occur only under extreme conditions. For example, when helium is cooled to very low temperatures, it can form a superfluid state which flows without viscosity or friction. This change is due to the quantum “wavelike” nature of matter, in which the ultracold helium atoms begin to coordinate and behave almost like a single particle. While the existence of superfluid helium has been known for a long time, the way that it interacts with larger objects has not been fully studied.

Now, a team of researchers from Osaka University manipulated nanoparticles suspended in superfluid helium using optical tweezers. They were able to use this optical trapping effect to confine metallic and dielectric nanoparticles in the superfluid helium that was just 1.4 degrees above absolute zero. “This experiment was the first successful application of optical tweezers at ultralow temperatures, because we were working at 271 degrees centigrade below zero,” first author Yosuke Minowa says. The trapped nanoparticles were made of gold or zinc oxide, between 10 and 80 nanometers in size, and could remain suspended for up to 30 minutes. 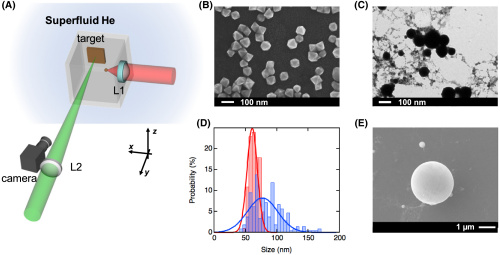 Optical tweezers allow for the three-dimensional confinement of tiny nanoparticles using a strongly focused beam of light from a laser. The light acts like a “tractor beam,” and this method is widely used in physics, chemistry, biology, and medical research. Normally, optical tweezers operate at room temperature, but this study opens the way for new cryogenic applications. “Our work enables exploring unprecedented interactions between quantum fluids and classical nanomaterials,” Minowa says. In superfluid helium, tiny whirlpools called vortices appear, but each can only spin at certain allowed values. In the future, nanoparticles might be used to visualize or even control these vortices. This research may help better understand the transition between the quantum realm and familiar laws of physics.