Researchers from the Okinawa Institute of Science and Technology Graduate University (OIST) have used microscopic strands of DNA to guide the assembly of gel blocks that are visible to the naked eye.

The hydrogel blocks, which measure up to 2mm in length and contain DNA on their surface, self-assembled in around 10-15 minutes when mixed in a solution, the scientists reported today in the Journal of the American Chemical Society.

“These hydrogel blocks are, we believe, the largest objects so far that have been programmed by DNA to form organized structures,” said Dr. Vyankat Sontakke, first author of the study and a postdoctoral researcher in the OIST Nucleic Acid Chemistry and Engineering Unit.

The process of self-assembly – in which an organized structure spontaneously forms when two or more individual components interact – is common in nature, with cells and DNA able to self-assemble into amazingly complex microscopic structures. But using interactions that occur on the molecular scale to direct the assembly of macroscopic objects (meaning visible to the naked eye) is a relatively new field of research, particularly with DNA.

“We chose DNA because it is so programmable, which it owes to its exquisite ability to recognize sequences,” said senior author, Professor Yohei Yokobayashi, who leads the Nucleic Acid Chemistry and Engineering Unit.

A double-stranded molecule of DNA is formed by two single strands of DNA that twist around each other to form a double helix shape. The strands are kept together by bonding between bases, which fit together like a jigsaw (A with T, and C with G). This specific base pairing ability means that scientists can design strands of DNA that match other strands precisely and will bond together. 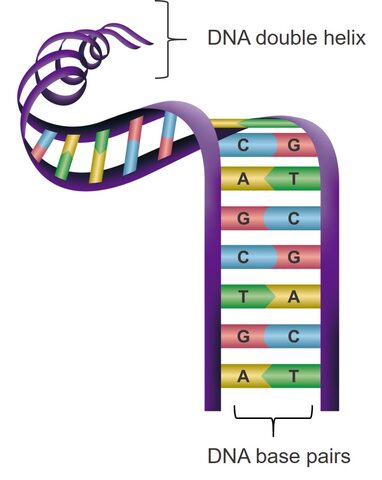 Base pairing is a very specific process which can be used to design matching strands.

When the hydrogel blocks were shaken in a solution, the matching strands of DNA paired together, acting like a “glue” that stuck the red and green blocks together. After ten minutes, the separated blocks self-assembled into a simple branching structure of alternating colors. 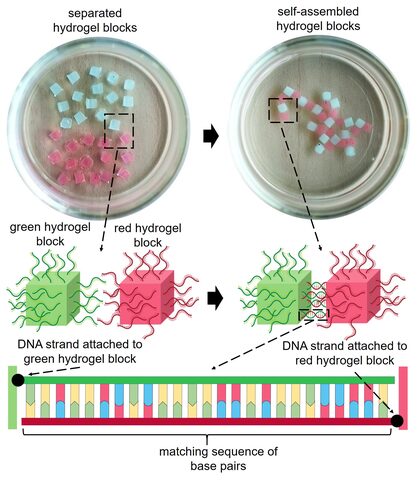 The red and green hydrogel blocks were able to stick to each other due to base pairing between the matching strands of DNA on their surface.

Importantly, the DNA strands did not interact with the identical strands of DNA on other blocks, so hydrogel blocks of the same color did not stick together.

The scientists further tested the ability for the DNA to recognize only specific sequences, by designing four pairs of matching strands. They attached the single stands from the first matching pair to the surface of the red hydrogel cubes. The same process was done for the green, blue and yellow hydrogel cubes.

When shaken together, despite the presence of many different DNA sequences, the strands only bonded with their matching strand, resulting in the previously mixed up hydrogel blocks self-sorting into groups of the same color.

“This shows that the process of self-assembly is very specific and easily programmable. By simply changing the sequence of DNA, we can guide the blocks to interact with each other in different ways,” said Prof. Yokobayashi. 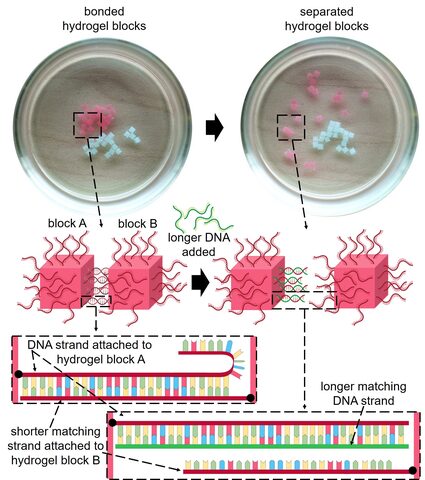 The hydrogel blocks disassembled when a second longer DNA strand was added that was a stronger match. The second strand therefore disrupted the bonding between the two DNA strands holding the blocks together.

“This is really exciting because it means that by using DNA as the “glue” to stick the hydrogel blocks together, the process is fully reversible,” said Dr. Sontakke. “This means that the individual components can also be re-used.”

While the structures formed so far are simple, the researchers hope to add more complexity by increasing the number of different cubes that are incorporated into the structure and by targeting different DNA strands to specific cube faces. They also plan to further increase the size of the hydrogel blocks.

“This is still basic research, but in the future, these techniques could be used for tissue engineering and regenerative medicine,” said Prof. Yokobayashi. “It might be possible to place different types of cells inside hydrogel cubes, which can then assemble into the complex 3-D structures needed to grow new tissues and organs.

“But,” he added. “Regardless of potential applications, it’s incredible to be able to witness chemistry as microscopic as interacting DNA strands with our own eyes. It’s a really fun piece of science.”

Read the original article on Okinawa Institute of Science and Technology.