Smartwatches, fitness trackers and other Internet of Things devices could get a significant boost to their “battery” life thanks to new, environmentally friendly energy research from the University of Surrey’s Advanced Technology Institute (ATI) and the Federal University of Pelotas (UFPel), Brazil.

In a paper published by the journal Nanoscale, the research team show how a supercapacitor can be efficiently manufactured into a high-performance and low-cost power storage device that can be easily integrated into footwear, clothing, and accessories.

Professor Ravi Silva, Director of the ATI and Head of the Nano-Electronics Centre at the University of Surrey, said:

“Supercapacitors are key to ensuring that 5G and 6G technologies reach their full potential. While supercapacitors can certainly boost the lifespan of wearable consumer technologies, they have the potential to be revolutionary when you think about their role in autonomous vehicles and AI-assisted smart sensors that could help us all conserve energy. This is why it’s important that we create a low cost and environmentally friendly way to produce this incredibly promising energy storage technology. The future is certainly bright for supercapacitors.” 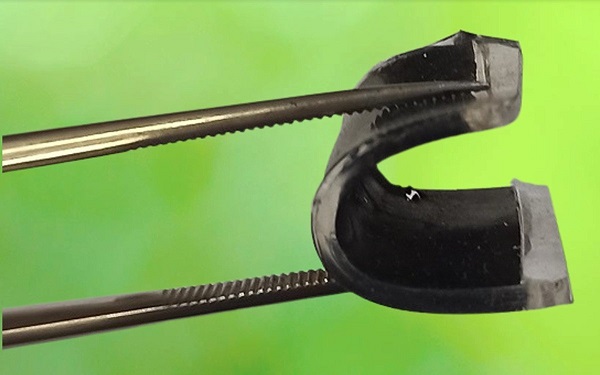 A supercapacitor is a means to store and release electricity, like a typical battery, but it does so with far quicker recharging and discharging times.

A supercapacitor is a means to store and release electricity, like a typical battery, but it does so with far quicker recharging and discharging times.

In the paper, the research team describe a new procedure for the development of flexible supercapacitors based on carbon nanomaterials. This method, which is cheaper and less time-consuming to fabricate, involves transferring aligned carbon nanotube (CNT) arrays from a silicon wafer to a polydimethylsiloxane (PDMS) matrix. This is then coated in a material called polyaniline (PANI), which stores energy through a mechanism known as “pseudocapacitance,” offering outstanding energy storage properties with exceptional mechanical integrity.

The team’s enhanced, wafer-thin supercapacitor retains most of its capacitance (the amount of separate electric charge that can be stored) after numerous cycles at different bending conditions, demonstrating its robustness, longevity, and efficiency.

“Working at the ATI on a project of that could have a positive impact on industry and our environment has been incredibly fulfilling. My supervisor, Professor Silva, and the entire team at Surrey made me feel like a valuable member of the team and I was lucky enough to learn from outstanding colleagues. This is an experience that I will never forget.”


Read the original article on University of Surrey.