Nanoparticles with a Mega Impact: How Injectable mRNA Fights Cancer

Before the announcement of the mRNA vaccines against SARS-CoV-2, it’s pretty unlikely that the idea to inject in vitro transcribed mRNA as a drug had crossed your mind. However, in the Stephan Lab it’s just one of the innovative immunobioengineering approaches they’ve been tinkering with for years.

The Stephan Lab designs tools that train the body’s immune system to fight off cancers. “So far, medical science has no procedure that can rapidly educate the immune system to eliminate cancer,” said Dr. Matthias Stephan. “Vaccines may require months to elicit responses, during which the disease can become fatal…[and] adoptive cell transfer requires a considerable amount of time to expand transfected T cells,” he added. In 2020, led by Drs. Neha Parayath and Sirkka Stephan, the Stephan Lab published a study in Nature Communications that flipped the standard approach to T cell engineering on its head. Instead of isolating, engineering, and reinjecting a patient’s own T cells, they asked, why not save the patient time, money, and discomfort by using injected mRNA to engineer those T cells as they circulate within their body?

First, the research team engineered stable nanoparticles that they could load with therapeutics, then added a “payload” of in vitro transcribed mRNA. This mRNA encoded either a chimeric antigen receptor (CAR) or an affinity-optimized T-cell receptor (TCR) that would recognize different antigens specific to diseases. The nanoparticles were coated with antibodies that specifically bound them to circulating T cells, allowing the T cells to take up the mRNA, translate it, and start using the CAR or TCR to find and fight cancerous cells. Their initial experiments showed highly efficient transfection of isolated human T cells, and both the strength and duration of receptor expression were comparable to that of T cells programmed by standard retroviral transduction.

Encouraged, the Stephan Lab moved into immunocompetent mouse models – and this is where the project blossomed. Nanoparticle-programmed CAR or TCR lymphocytes infiltrated tumor tissues well and caused significant disease regression in mouse models of leukemia, prostate cancer, and hepatitis B-induced hepatocellular carcinoma (HCC). In fact, repeated injection with these mRNA-loaded nanocarriers caused disease regression across all three cancer types at levels similar to infusions with ex vivo engineered T cells. First, leukemic mice, which only survived up to Day 14 without treatment, survived up to Day 28 when treated with the nanocarriers and had an average 26-fold reduced tumor burden after three weeks of therapy as compared to control nanocarriers encoding green fluorescent protein (GFP, a protein which makes the cells glow green but does not affect their surface receptors). Second, injecting nanoparticles encoding prostate tumor specific CARs into mice with established prostate tumors also roughly doubled survival time. Third, mice with HCC that were injected with nanocarriers encoding TCRs specific to a core antigen of hepatitis B virus (HBV) showed a 13x reduction in tumor load when compared to mice that received no treatment. These results demonstrated a strong effect of nanocarrier-mRNA technology on multiple cancer types. 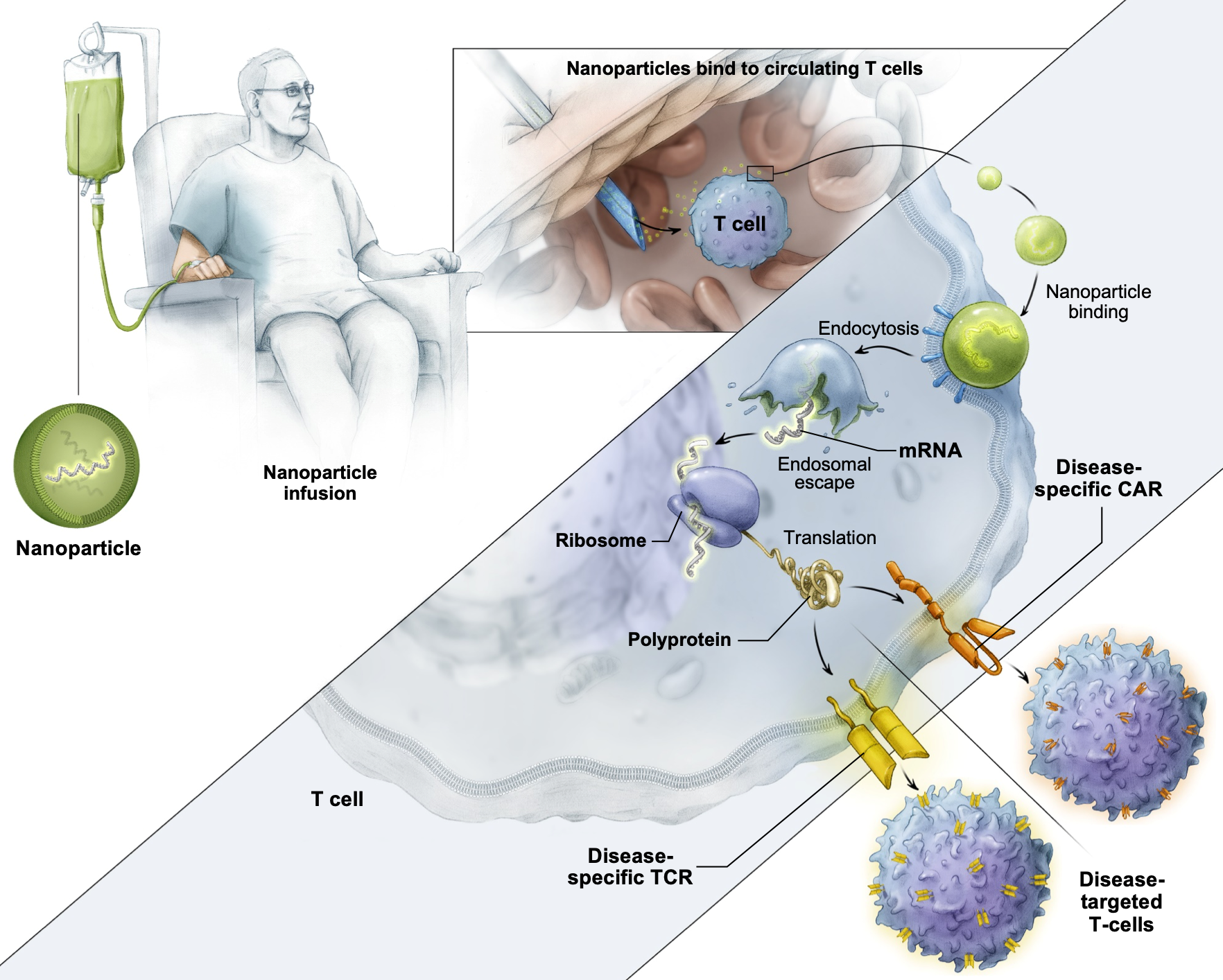 Engineered nanoparticles filled with mRNA and coated with antibodies target a patient’s T cells. Upon finding and fusing to the T cells, the nanoparticles release their mRNA package which is then translated into a disease-specific receptor and displayed on the T cell surface.

The nanocarriers have a few advantages over other immunotherapy approaches. According to Dr. Stephan, “recombinant antibodies can bring about immediate antitumor responses, but as a passive form of treatment their benefits require repeated or even life-long administration because they are rapidly cleared from circulation. Several groups of investigators have developed bispecific antibodies, including BiTEs, DARTs and diabodies, to redirect resident T cells toward tumor cells…However, BiTEs must be administered as a continuous infusion and can produce systemic toxicities. By contrast, the in situ programming system we developed can generate tumor-specific T cells de novo which actively localize to the target and serially destroy cancer cells. Furthermore…direct in situ programming can not only equip lymphocytes with engineered receptors that possess high affinity for the tumor target, but also provide costimulatory signals to elicit robust T-cell expansion.” The ease of manufacturing, high customizability, and simplicity of administration make this a very attractive technique in the realm of immunobioengineering.

Behind every major therapeutic breakthrough is a series of proof-of-concept experiments, and the resources at Fred Hutch were critical for this project. “The Cancer Consortium facilitated the cross-disciplinary science that led to this work by providing a venue to link our solid tumor work in prostate cancer with innovative immune-therapy approaches developed by Dr. Stephan,” said Dr. Peter Nelson. “The proof-of-principle studies required validation using mouse models and high-throughput genomics which were supported through the Cancer Consortium’s state-of-the-art shared resources,” he continued.  The next step is applying this research to human subjects, and the authors “are currently working with Sanofi to translate this technology into clinical studies,” said Dr. Stephan. The group’s major goals are to scale up nanoparticle production to support a Phase I clinical trial, to identify potential risks of infusion, and to confirm the safety of the nanoparticles for clinical use in humans. These might be nanoparticles, but their impact on cancer treatments promises to be huge.