Global public health officials are concerned about the rise of drug-resistant bacterial and microbial infections, which are estimated to cause 10 million deaths each year by 2050, a crisis exacerbated by the lack of research and development investment which has led to a dearth of new antibiotics.

To address this challenge, researchers in the lab of Presidential Assistant Professor Cesar de la Fuente have been looking for new, natural resources for antibiotic molecules. In a previous study from the group, the researchers were able to locate novel peptides, chains of amino acids that are the building blocks of proteins, that had the potential to fight harmful bacteria.

Now, in a new study published in ACS Nano, the researchers have identified three distinct antimicrobial peptides, coined “encrypted peptides” by the researchers, taken from a protein in human plasma. 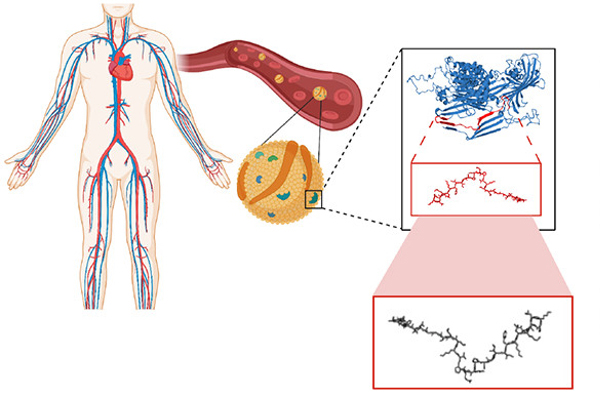 The antimicrobial peptides the researchers studied are “encrypted” in that they are contained within Apolipoprotein B, a blood plasma protein that is not directly involved in the immune response, but are not normally expressed on their own.

Each of the three peptides were able to break through bacterial membranes, kill the bacteria cell, and impede the growth of biofilms. The researchers also demonstrated these peptides’ antimicrobial abilities in a mouse model and found that, when used in combination with each other or with commercial antibiotics, their antibiotic effect increased significantly.

“What is unique in the peptides we are examining is their ability to attack the bacterial membrane, a structure that requires multiple genes to build and maintain,” says de la Fuente. “Typical antibiotics only target one gene or aspect of bacterial cells making it relatively easy for bacteria to develop resistance, so antimicrobials such as the peptides we describe here that attack multiple targets at once are more successful at impeding bacterial resistance.”