New research from physicists at the University of Sussex will ‘significantly advance’ the new technology area of liquid electronics, enhancing the functionality and sustainability of potential applications in printed electronics, wearable health monitors and even batteries.

In their research paper published in ACS Nano, the Sussex scientists have built on their previous work to wrap emulsion droplets with graphene and other 2D materials by reducing the coatings down to atomically-thin nanosheet layers. In doing so they were able to create electrically-conducting liquid emulsions that are the lowest-loading graphene networks ever reported – just 0.001 vol%. 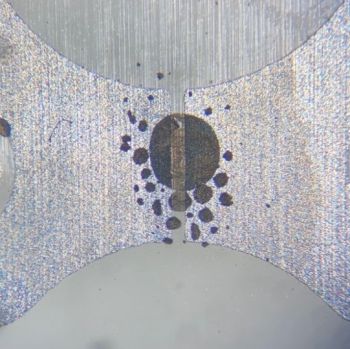 This means that the subsequent liquid electronic technology – whether that might be strain sensors to monitor physical performance and health, electronic devices printed from emulsion droplets, and even potentially more efficient and longer-lasting electric vehicle batteries, will be both cheaper and more sustainable because they will require less graphene or other 2D nanosheets coating the droplets. 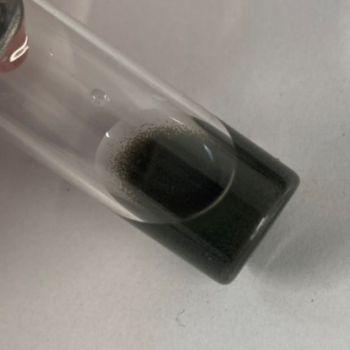 Another significant development was that the scientists can now make these electronic droplet networks using any liquids – whereas previous research focused on conventional oils and water – because they have discovered how to control which liquid droplets are wrapped in graphene, meaning that they can design the emulsions specifically to the desired application.

Research Fellow in Material Physics in the University of Sussex School of Mathematical and Physical Science and lead author of the paper, Dr Sean Ogilvie explains the science behind the development: “The potential of 2D materials, such as graphene, is in their electronic properties and their processability; we developed a process to harness the surface area of our nanosheet dispersions to stabilise emulsion droplets with ultra-thin coatings.

"The tuneability of these emulsions allows us to wrap 2D materials around any liquid droplets to exploit their electronic properties.  This includes emulsion inks, in which, we've discovered that droplets can be deposited without the coffee ring effect which hinders printing of conventional functional inks, potentially enabling single-droplet films for printed transistors and other electronic devices.

“Another exciting development for our research group is that we can now also design and control our emulsions towards specific applications such as wrapping soft polymers such as silicone for wearable strain sensors that exhibit increased sensitivity at low graphene loading, and we are also investigating emulsion assembly of battery electrode materials to enhance the robustness of these energy storage devices.”

Professor of Experimental Physics at the University of Sussex, Alan Dalton, who was first inspired by the making of a salad dressing to explore the potential of adding graphene to liquid emulsions, explains why this development is exciting: “In bringing the graphene coatings of the liquid droplets down to atomically-thin layers and in opening wide the potential for real-world applications by being able to do so with any liquid material, this research development will significantly advance the emerging and scientifically exciting field of liquid electronics.”