A new study shows that an easily produced composite of gallium and aluminum creates aluminum nanoparticles that react rapidly with water at room temperature to yield large amounts of hydrogen.

Aluminum is a highly reactive metal that can strip oxygen from water molecules to generate hydrogen gas. Its widespread use in products that get wet poses no danger because aluminum instantly reacts with air to acquire a coating of aluminum oxide, which blocks further reactions.

For years, researchers have tried to find efficient and cost-effective ways to use aluminum’s reactivity to generate clean hydrogen fuel. A new study by researchers at UC Santa Cruz shows that an easily produced composite of gallium and aluminum creates aluminum nanoparticles that react rapidly with water at room temperature to yield large amounts of hydrogen. The gallium was easily recovered for reuse after the reaction, which yields 90% of the hydrogen that could theoretically be produced from reaction of all the aluminum in the composite. 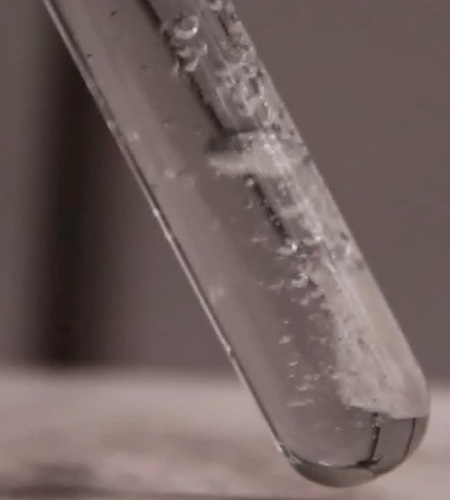 Bubbles of hydrogen gas are generated from the reaction of water with an aluminum-gallium composite.

“We don’t need any energy input, and it bubbles hydrogen like crazy. I’ve never seen anything like it,” said UCSC Chemistry Professor Scott Oliver.

Oliver and Bakthan Singaram, professor of chemistry and biochemistry, are corresponding authors of a paper on the new findings, published February 14 in Applied Nano Materials. 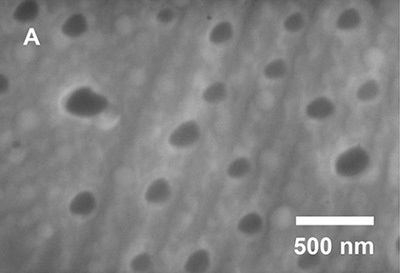 Scanning electron microscopy of the composite shows aluminum nanoparticles in a matrix of gallium.

The reaction of aluminum and gallium with water has been known since the 1970s, and videos of it are easy to find online. It works because gallium, a liquid at just above room temperature, removes the passive aluminum oxide coating, allowing direct contact of aluminum with water. The new study, however, includes several innovations and novel findings that could lead to practical applications.

A U.S. patent application is pending on this technology. The international (PCT) filing on which it was based is linked here.

Singaram said the study grew out of a conversation he had with a student, coauthor Isai Lopez, who had seen some videos and started experimenting with aluminum-gallium hydrogen generation in his home kitchen.

“He wasn’t doing it in a scientific way, so I set him up with a graduate student to do a systematic study. I thought it would make a good senior thesis for him to measure the hydrogen output from different ratios of gallium and aluminum,” Singaram said.

Previous studies had mostly used aluminum-rich mixtures of aluminum and gallium, or in some cases more complex alloys. But Singaram’s lab found that hydrogen production increased with a gallium-rich composite. In fact, the rate of hydrogen production was so unexpectedly high the researchers thought there must be something fundamentally different about this gallium-rich alloy.

Oliver suggested that the formation of aluminum nanoparticles could account for the increased hydrogen production, and his lab had the equipment needed for nanoscale characterization of the alloy. Using scanning electron microscopy and x-ray diffraction, the researchers showed the formation of aluminum nanoparticles in a 3:1 gallium-aluminum composite, which they found to be the optimal ratio for hydrogen production.

In this gallium-rich composite, the gallium serves both to dissolve the aluminum oxide coating and to separate the aluminum into nanoparticles. “The gallium separates the nanoparticles and keeps them from aggregating into larger particles,” Singaram said. “People have struggled to make aluminum nanoparticles, and here we are producing them under normal atmospheric pressure and room temperature conditions.”

Making the composite required nothing more than simple manual mixing.

“Our method uses a small amount of aluminum, which ensures it all dissolves into the majority gallium as discrete nanoparticles,” Oliver said. “This generates a much larger amount of hydrogen, almost complete compared to the theoretical value based on the amount of aluminum. It also makes gallium recovery easier for reuse.”

Although gallium is not abundant and is relatively expensive, it can be recovered and reused multiple times without losing effectiveness, Singaram said. It remains to be seen, however, if this process can be scaled up to be practical for commercial hydrogen production.

Read the original article on University of California, Santa Cruz.