Metal Mix and Match: An Unexpected Discovery Could Improve the Crystallinity of Coordination Nanosheets

Coordination nanosheets are emerging 2D materials with a wide range of applications. However, highly crystalline nanosheets are difficult to synthesize through solution-based approaches. In a recent study, scientists found a simple strategy to improve the structural order and performance of nanosheet films by using two different metal ions instead of one. Their findings highlight a solution for the development of high-quality coordination nanosheets with superior crystallinity and conductivity.

Coordination nanosheets are a new and emerging class of two-dimensional materials, rapidly gaining importance in the field of nanomaterials. They consist of metal ions and organic ligand molecules, linked to each other to form one framework, via coordination bonds. These nanosheets act as building blocks, which can be mixed and matched to produce a large variety of planar structures, with potential applications in electronic devices, batteries, and catalytic systems.

In 2013, benzenehexathiolato (BHT) was discovered as a powerful organic ligand in coordination nanosheets. It was observed that upon changing the element used in the metal centers, it is possible to create BHT-based nanosheets with vastly different structural properties.

However, the synthesis of BHT-based coordination nanosheets via solution-based processes has proven challenging, which is rather unfortunate due to the economic viability and scalability of such approaches. The resultant nanosheets lack crystallinity, indicating the formation of small crystalline domains with poor orientation control. These structural shortcomings hinder the nanosheet's performance and limit scientists from studying the nanosheet's structure-property relationships. 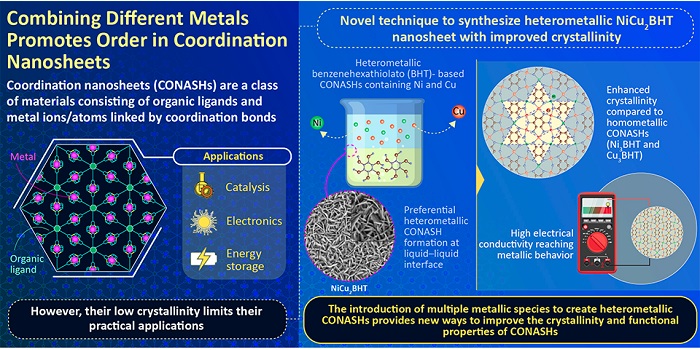 Now, a team of researchers led by Professor Hiroshi Nishihara of Tokyo University of Science (TUS) Japan, has investigated whether BHT-based coordination nanosheets developed by the introduction of two metal ions could overcome the aforementioned challenges, in a new study, published in Advanced Materials, funded by Japan Science and Technology Agency, Japan Society for the Promotion of Science and the White Rock Foundation. To do so, the team, which also included Dr. Ryojun Toyoda and Dr. Naoya Fukui from TUS, and Professor Henning Sirringhaus from the University of Cambridge, and Professor Sono Sasaki from Kyoto Institute of Technology, prepared heterometallic nanosheet films at a liquid-liquid interface, by changing the mixing ratio of two metal ions - copper (Cu) and nickel (Ni), in an aqueous solution. Simply put, they poured an aqueous solution containing these two metal ions onto an organic solution containing a BHT precursor.

To their surprise, they found that a new structural phase had formed at the interface between the two phases, with intermediate ratios of nickel and copper. Moreover, they found that this NiCu2BHT film possessed much higher crystallinity than pure copper and nickel films!

Dr. Nishihara and team were especially excited with these findings, because such an approach normally yields nanosheets with poor crystallinity.

"Our results indicate that the nanosheets grow in a specific direction and with a fixed composition, NiCu2BHT, at the liquid-liquid interface when the two metal ions are mixed at an appropriate ratio," explains Prof. Nishihara. "It is extraordinary that such simple mixing of different metal ions resulted in a unique structure with 2D periodicity and enhanced crystallinity, even in relatively thick films," he adds.

With an increase in crystallinity, notable improvements were also observed in the performance of these heterometallic nanosheets. Electrical conductivity measurements together with the analysis of film morphology via electron microscopy techniques revealed that these films have lower activation energies and higher conductivities than copper films. In fact, researchers observed conductivities of up to 1300 S/cm with a dependency on temperature similar to that of good metal conductors. These observations are remarkable since such values are among the highest to be observed for 2D coordination nanosheets!

Finally, the team analyzed the underlying mechanisms that led to this improvement in crystalline order and suggested that NiCu2BHT films may naturally arrange themselves into a bilayer structure that releases the structural strain of the material.

"It is reasonable to assume that a bilayer structure is a more favorable structural phase for heterometallic BHT-based coordination nanosheets, rather than the distorted structures of the corresponding homometallic films. Overall, our findings open a powerful new pathway to improve the crystallinity and tuning of the functional properties of highly conducting coordination nanosheets for a wide range of device applications." says Dr. Nishihara, while discussing his findings.

Let us hope this newfound approach helps researchers reap the many benefits of coordination nanosheets!