Researchers at the RIKEN Center for Sustainable Resource Science (CSRS) in Japan have developed a way to improve crop quality without needing to create special genetically modified plants. Rather that changing plant genomes, the new technique relies on a spray that introduces bioactive molecules into plant cells through their leaves.

The new technology could be used to help crops resist pests or become more resistant to drought—in less time and at less cost than making lines of genetically modified crops. The study was reported in the scientific journal ACS Nano.

Technology allows us to directly alter genomes and create genetically modified organisms (GMOs), including GM food. However, making transgenic plants takes time, money, and still has not gained widespread public support. RIKEN CSRS researchers led by Masaki Odahara have developed an alternative to GM food that can overcome these problems. For example, rather than changing a plant’s genome so that it doesn’t express a particular gene, the same gene can be suppressed on the fly by inserting a specific bioactive compound into the plant. In this scenario, the bioactive compound is taken into the plant’s cells by a carrier that can penetrate the cell walls of plant cells. 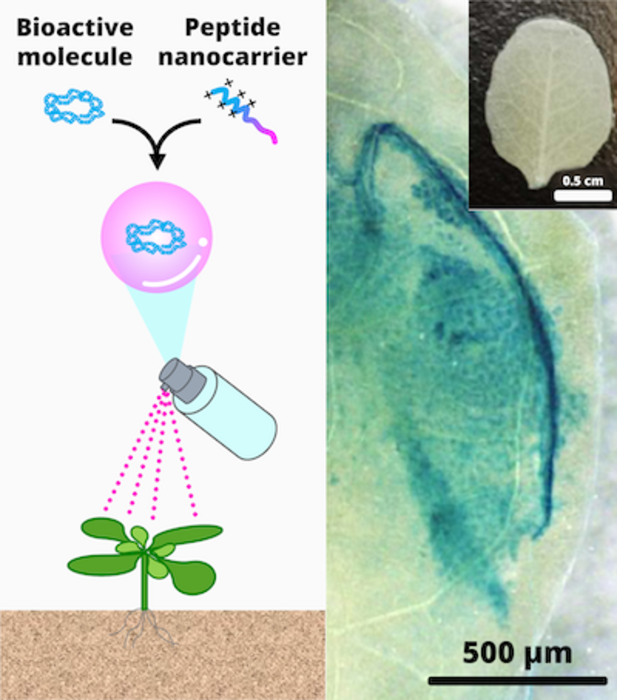 (Left) Schematic of the process. A bioactive molecule (like DNA or RNA) is combined with a peptide nanocarrier (a cell-penetrating peptide, CPP) in an aqueous solution and then sprayed onto plant leaves with a spray atomizer. This technique can alter gene expression without altering the genes themselves. (Right) Evidence that the system can be used to promote gene expression. Blue staining can be seen after spraying with a plasma DNA/CPP complex containing the GUS reporter gene. Note the upper leaf without any blue staining. This leaf was sprayed with a solution that contained the plasma DNA but not the peptide carrier.

While the concept might be simple, making it happen was a challenge. “In addition to designing a way to introduce bioactive molecules into the plants,” says Odahara, “we had to consider a delivery method that would be practical for cultivated crops under real agricultural conditions.” The team concluded that the best method would be through a spray that could be deployed over large fields relatively easily.

Many types of nanoparticles can penetrate plant cells. The researchers focused on cell-penetrating peptides (CPPs) because they can also target specific structures inside plants cells, such as chloroplasts. The first challenge was to determine which CPPs are best when using a spray. They tagged natural and synthetic CPPs with fluorescent yellow, sprayed them on plant leaves, and measured the amount of fluorescence in the leaves with a confocal laser-scanning microscope at different time points. After performing this procedure in typical laboratory Arabidopsis thaliana, as well as in several types of soybeans and tomatoes, they found several natural CPPs that were able to penetrate into the outer layer of the leaves, and in some cases even deeper.

Further experiments showed that this technique worked well when plasmid DNA was attached to the CPPs, and analysis showed that genes were effectively expressed in the leaves of both A. thaliana and soybeans after being carried into the cells through an aqueous spray. The researchers also found that by including other biomolecules and nanostructures in the spray solution, they could temporarily increase the number of pores in the leaves, which increased how much spray was taken up by the plant.

Often, crop yield can be improved by inserting or knocking out genes. After creating a transgenic plant that overexpresses yellow fluorescence in the leaves, the team attached RNA that interferes with fluorescent protein expression to a CPP. As hoped, spraying the  leaves with this complex silenced yellow florescence expression. “This result was critical,” says Odahara, “because it is important that any alternative to genetic modification be able to achieve the same functional outcome.” Lastly, the researchers were able to similarly silence genes specific to chloroplasts when they included a chloroplast-targeting peptide to a specific CPP-RNA complex.

“Mitochondria and chloroplasts regulate much of a plant’s metabolic activity,” says Odahara. “Targeting these structures with bioactive molecules delivered via spray could effectively improve economically desirable quality traits in crops. Our next step is to improve the efficiency of the delivery system. Ultimately, we hope this system can be used to safely protect crops from parasites or other harmful factors.”

Scientists Propose Nano-vitamins for Trees from a Test Tube