Researchers have calculated that low-power lasers on Earth could launch and maneuver small probes equipped with silicon or boron nitride sails, propelling them to much faster speeds than rocket engines.

Space travel can be agonizingly slow: For example, the New Horizons probe took almost 10 years to reach Pluto. Traveling to Proxima Centauri b, the closest habitable planet to Earth, would require thousands of years with even the biggest rockets. Now, researchers calculate in ACS’ Nano Letters that low-power lasers on Earth could launch and maneuver small probes equipped with silicon or boron nitride sails, propelling them to much faster speeds than rocket engines.

Instead of catching wind, like the sails on boats, “laser sails” would catch laser beams and could, in principle, push spacecraft to nearly the speed of light. Scientists have been working on this concept for a while. For example, one privately funded project called the Breakthrough Starshot initiative aims to send a small, sailed probe weighing about a gram to Proxima Centauri b with a flight taking only 20 years. It would be propelled to 20% of light speed by a 100 GW, kilometer-square laser array. Ho-Ting Tung and Artur Davoyan wondered if much lower-power, smaller laser arrays could find use in applications where conventional electric and chemical rockets are now used. The lasers might someday be able to adjust the orbit of satellites after launch or propel tiny sailed probes on interplanetary or interstellar missions, without requiring large amounts of fuel. 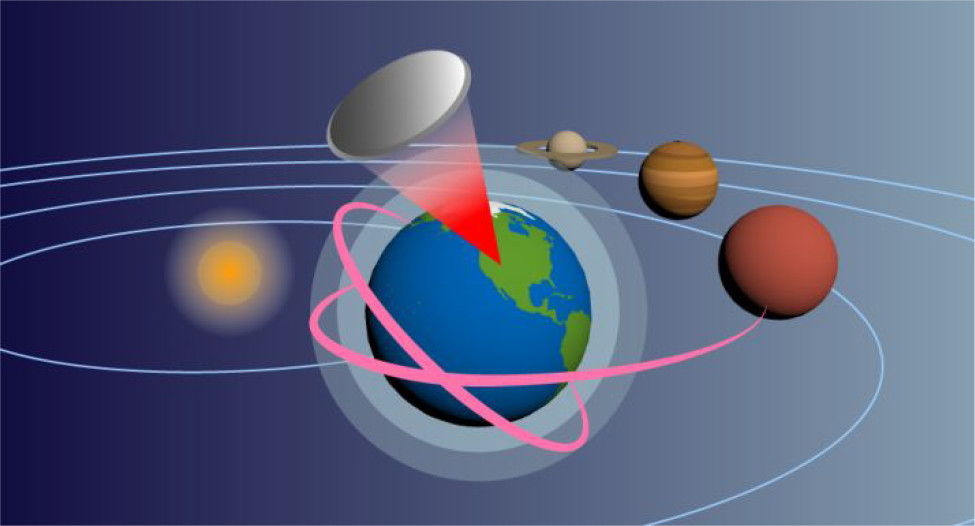 In this illustration, a low-power laser (red cone) on Earth could be used to shift the orbit (red lines) of a small probe (grey circle), or propel it at rapid speeds to Neptune and beyond.

The researchers performed calculations to show that even lasers with powers of about 100 kW and array sizes of about a meter could power a 1-gram probe at velocities far exceeding the current record, with only minutes to hours of laser illumination. According to their calculations, the lasers could maneuver small probes between different Earth orbits in only a day, which is not possible with current electrical and chemical rockets. The team determined that the best materials for the laser sails, which allowed high reflectivity and rapid cooling, were silicon nitride and boron nitride structured at the nanoscale. Finally, the researchers calculated that these tiny laser-propelled probes could travel fast enough to escape the solar system, reaching 5 times higher velocities than the New Horizons probe. These prototype sailed spacecraft, driven by low-power lasers, could pave the wave for fast space exploration and future interstellar flight, the researchers say.