Researchers from China’s Harbin Institute of Technology have 3D printed a soft robot in graphene-oxide that is capable of moving backward and forwards when exposed to moisture.

According to the researchers, the study could provide a versatile platform from which graphene-oxide soft robots with moisture actuation capabilities can be further developed.

Challenges of 3D printing with graphene

Graphene has numerous desirable properties that make it suited to applications within energy generation, microelectronics, biomedicine, and sensors, to name but a few. The material’s lightweight properties, electrical and thermal conductivity, and mechanical strength offer great promise within these areas, however as much of graphene’s potential comes from deploying the material in its monolayer form, utilizing the material for 3D printing still presents significant challenges.

Steps have been previously been taken towards harnessing graphene’s potential within 3D printing, though, such as the development of a high-resolution 3D printing method by researchers from Virginia Tech and Lawrence Livermore National Laboratory (LLNL), which involves the dispersal of graphene within a gel to form a 3D printable resin. LLNL has also worked with a team at the University of California, Santa Cruz to produce graphene-based aerogel electrodes used within energy storage devices.

Elsewhere, researchers from Spain’s Institute of Ceramics and Glass (ICV) and Aix-Marseille University 3D printed graphene oxide scaffolds as the basis for lightweight hybrid structures that retained many of graphene’s desirable properties, including electrical conductivity and water adsorption capacity.

More recently, University at Buffalo researchers have developed a novel 3D printed water-purifying graphene aerogel that could be used within wastewater treatment plants, while Uppsala University scientists and graphene specialist Graphmatech have successfully added graphene to 3D printed copper parts to increase their strength and density. 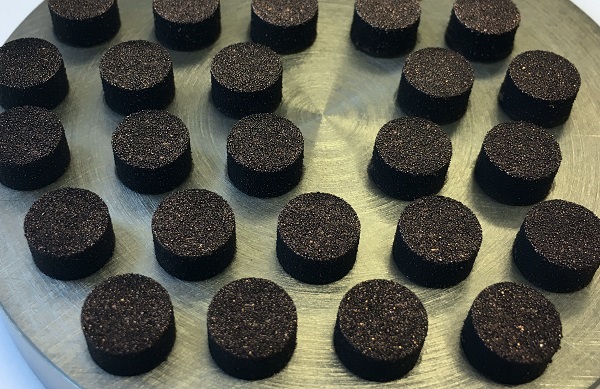 The team from the Harbin Institute of Technology identified that previously reported 3D printed graphene-oxide structures tend to be highly porous, due to the material’s super hydrophilic characteristics. The water content in graphene-oxide ink is generally higher than 90 percent of the material’s weight, which must be removed following the 3D printing process.

Freeze-drying techniques are typically used to maintain the uniformity of 3D printed graphene-oxide structures, however this can leave the structures highly porous. In order to overcome this effect, the researchers proposed to control the shrinkage process of the 3D printed graphene-oxide gel through a combination of DIW 3D printing and constrained drying techniques.

The scientists began by ensuring the rheological properties of the graphene-oxide ink were optimized to allow for both smooth extrusion during the DIW process and shape stability of the printed objects. To achieve this, they ensured the ink contained highly-aligned and densely compacted graphene-oxide sheets.

To prevent deformation during the drying phase, the researchers employed 3D printed constraints that could be easily controlled to ensure uniform shrinkage across the entire structure. This meant that the graphene-oxide sheets remained aligned and compacted throughout the drying process, enabling the printed structure to hold its shape.

The scientists were also able to control the angle at the corner of the 3D constraints, as well as the humidity of the local environment, to demonstrate the actuation capability of their 3D printed graphene-oxide soft robot. By alternatively dropping water droplets on each of the soft robot’s ‘legs’, it was able to move backward and forwards without any external power supply.

According to the researchers, the successful combination of DIW 3D printing and constrained drying has formed the basis of a versatile platform to develop future graphene-oxide soft robots that are sensitive to changes in moisture and humidity.

Further information in the study can be found in the paper titled: “3D printing graphene oxide soft robotics,” published in the ACS Nano journal. 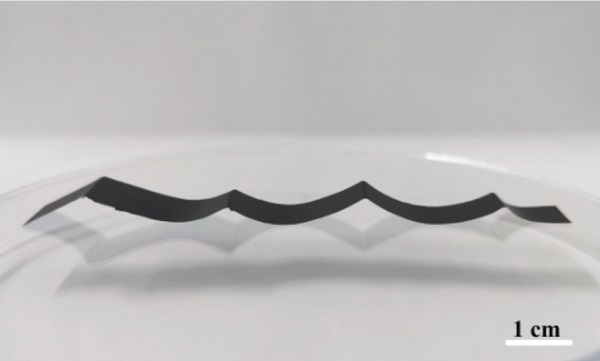 The 3D printed graphene-oxide structure with a thickness of 20 μm.

3D printing is being increasingly leveraged for novel soft robotics applications due to the design freedom granted by the technology.

Just last week, researchers from Johannes Kepler University Linz 3D printed soft robots with integrated sensor networks that were capable of stretching to six times their original length. Through the study, the team sought to address the sustainability concerns posed by the development of soft robotics applications, such as the use of non-biodegradable materials and the field’s growing environmental impact.

Previously, researchers at Linköping University have 3D printed a set of microactuators for soft micro robotics with 4D capabilities, while Harvard University scientists leveraged the technology to fabricate a school of soft robotic fish capable of swimming in complex patterns.

Elsewhere, 4D printed self-propelling soft robots have been created by a team at Tianjin University, and UC San Diego researchers have proposed a novel method of 3D printing liquid crystal elastomers that could form the basis of an actuating material for soft robotics.