As hard as diamond and as flexible as plastic, highly sought-after diamond nanothreads would be poised to revolutionize our world -- if they weren't so difficult to make. Recently, a team of scientists developed an original technique that predicts and guides the ordered creation of strong, yet flexible, diamond nanothreads, surmounting several existing challenges. The innovation will make it easier for scientists to synthesize the nanothreads -- an important step toward applying the material to practical problems in the future.

Recently, a team of scientists led by Carnegie’s Samuel Dunning and Timothy Strobel developed an original technique that predicts and guides the ordered creation of strong, yet flexible, diamond nanothreads, surmounting several existing challenges.  The innovation will make it easier for scientists to synthesize the nanothreads—an important step toward applying the material to practical problems in the future. The work was recently published in the Journal of the American Chemical Society.

Diamond nanothreads are ultra-thin, one-dimensional carbon chains, tens of thousands of times thinner than a human hair. They are often created by compressing smaller carbon-based rings together to form the same type of bond that makes diamonds the hardest mineral on our planet.

However, instead of the 3D-carbon lattice found in a normal diamond, the edges of these threads are “capped” with carbon-hydrogen bonds, which make the whole structure flexible.

Dunning explains: “Because the nanothreads only have these bonds in one direction, they can bend and flex in ways that normal diamonds can’t.” 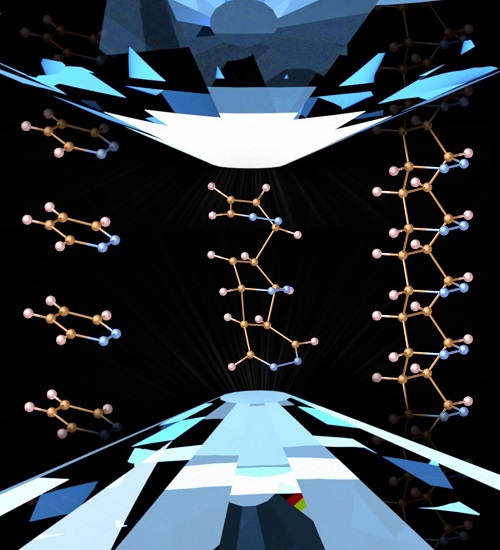 Artist’s conception showing how guided diamond nanothread synthesis occurs when the starting material is compressed between the points of two diamonds. This diamond anvil cell is a frequently used tool for bringing matter to extreme pressures and Carnegie scientists have been pioneering leaders in deploying this research technique for decades.

Scientists predict that the unique properties of carbon nanothreads will have a range of useful applications from providing sci-fi-like scaffolding on space elevators to creating ultra-strong fabrics. However, scientists have had a hard time creating enough nanothread material to actually test their proposed superpowers.

“If we want to design materials for specific applications,” says Dunning, “it's essential for us to precisely understand the structure and bonding of the nanothreads we're making. This thread directing method really allows us to do that!”

One of the biggest challenges is getting the carbon atoms to react in a predictable way. In nanothreads made from benzene and other six-atom rings, each carbon atom can undergo chemical reactions with different neighbors. This leads to many possible reactions competing with one another and many different nanothread configurations. This uncertainty is one of the biggest hurdles scientists face to synthesize nanothreads where the precise chemical structure can be determined.

Dunning’s team determined that adding nitrogen to the ring in place of carbon might help guide the reaction down a predictable pathway. They chose to start their work with pyridazine—a six atom ring made up of four carbons and two nitrogens—and began working on a computer model. Dunning worked with Bo Chen, Donostia International Physics Center, and Li Zhu, Assistant Professor at Rutgers and Carnegie Alum, to simulate how pyridazine molecules behave at high pressure.

After running several computer simulations showing successful nanothread formation at high pressure, they were ready to take the experiment to the lab. 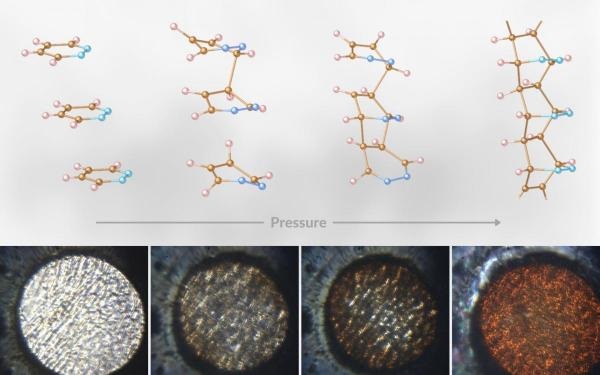 The starting sample of pyridazine—a six atom ring made up of four carbons and two nitrogens—changes under pressure as diamond nanothread formation progresses. The first and last images show that there has been a permanent color change between the samples after thread formation. The images don’t show individual threads, but “bulk” samples of pyridazine during compression, each around 40 microns thick with a 180-micron diameter.

The team took a drop of pyridazine and loaded it into a diamond anvil cell—a device that allows scientists to produce extreme pressures by compressing samples between the tiny tips of more traditional diamonds. Using infrared spectroscopy and X-ray diffraction, they monitored changes in the pyridazine’s chemical structure up to about 300,000 times normal atmospheric pressure looking for the creation of new bonds.

When they saw the bonds forming, they realized they had successfully predicted and created the first pyridazine diamond nanothread in the lab.

“Our reaction pathway produces an incredibly orderly nanothread,” said Dunning. “The ability to incorporate other atoms into the nanothread backbone, guide the reaction, and understand the nanothread’s chemical environment will save researchers invaluable time in developing nanothread technology.”

This process of using these non-carbon atoms to guide the formation of nanothreads, which Dunning calls “thread directing,” is a significant step towards a future where scientists can predictably create these materials and use them for advanced applications. Now that this synthetic strategy has been discovered, Dunning plans to identify and test the many possible nanothread precursors.He also can’t wait to start putting the pyridazine nanothreads through their paces.

Dunning concluded, “Now that we know we can make this material, we need to start making enough to learn enough to determine mechanical, optical, and electronic properties!”


Read the original article on Carnegie Institution for Science.