Despite rapid advances of nanoscience, the properties of quasi-sub-nanomaterials with structures falling between molecules and solids remain unrevealed. However, researchers from Tokyo Institute of Technology (Tokyo Tech) have now developed a cost-effective method for creating these quasi-sub-nanomaterials. This method involves forming multiple metallo- or organo-complexes on dendron units to create supramolecular structures that can be reduced to quasi-sub-nanoparticles with the desired number of atoms.

Nanoparticles (which have sizes ranging between 3–500 nm), and sub-nanoclusters (which are around 1 nm in diameter) are utilized in many fields, including medicine, robotics, materials science, and engineering. Their small size and large surface-area-to-volume ratios give them unique properties, rendering them valuable in a variety of applications, ranging from pollution control to chemical synthesis.

Recently, quasi-sub-nanomaterials, which are about 1-3 nm in scale have attracted attention because they have a dual nature–they can be regarded as nanoparticles, as well as inorganic molecules. Understandably, controlling the number of atoms in a quasi-sub-nanomaterial could be of much value. However, synthesizing such precise molecular structures is technically challenging–but scientists at Tokyo Tech were certainly up for this challenge!

Dendrons – highly branched molecular structures consisting of basic imines – have been suggested as precursors for the precise synthesis of quasi-sub-nanomaterials with the desired number of atoms. The imines in the dendrons function as a scaffold that can form complexes with certain acidic metallic salts, accumulating metals on the dendron structure. These, in turn, can be reduced to metal sub-nanoclusters with the desired number of atoms. However, synthesizing dendrons with a high proportion of imines is an expensive process with low yield. 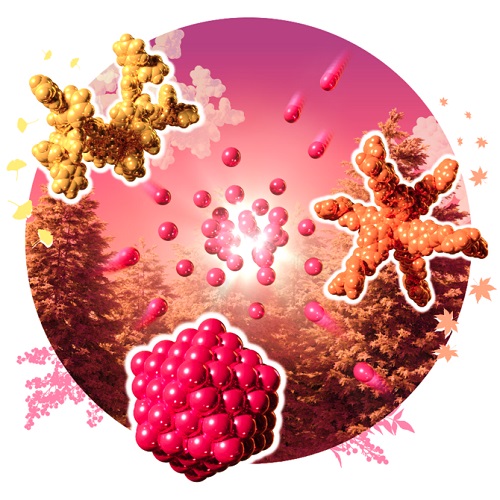 This scientific illustration of the study, created by Dr Takamasa Tsukamoto of Tokyo Tech, was selected as an Inside Cover Picture in Angewandte Chemie International Edition.

Now, in a study published in Angewandte Chemie, the researchers explain how they have combined multiple dendrimer structures to form a supramolecular capsule composed of more than 60 imines. “The synthesis of dendron-assembled supramolecules was accomplished by connecting internal core units and external dendron units—which determine the central structure and terminal branches, respectively,” explains Assistant Professor Takamasa Tsukamoto, who was involved in the study. The internal structure of this supramolecule contained a six-pronged core with acidic tritylium, while each outer unit contained dendrons with imines. The interaction between the acidic core and the basic outer structure resulted in a self-assembling organo-complex.

Moreover, the imines were found to co-accumulate with rhodium salts such that the innermost imines formed a complex with tritylium units while the outermost ones were populated with the rhodium salts. The resulting supramolecule, which had an internal core unit surrounded by six external dendron units (each containing 14 rhodium salts at the outer imines), was successfully condensed to clusters containing 84 rhodium atoms having a size of 1.5 nm. 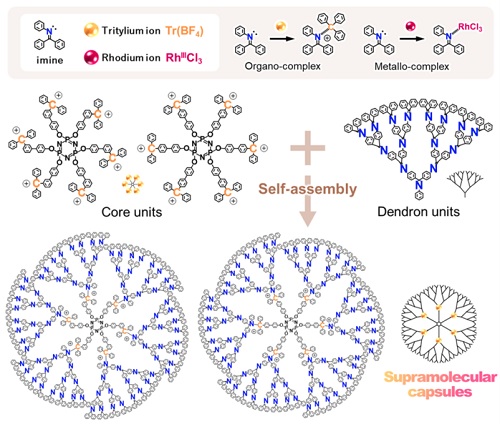 By attaching imine containing dendrons to an acidic core, the researchers constructed a supramolecular template for the synthesis of quasi-sub-nanomaterials. Moreover, since the imines can form complexes with a wide range of cationic units, the method can be used to synthesize a variety of supramolecular structures. Due to its versatility, simplicity and cost-effectiveness, the method can be a cornerstone for the development of new nanomaterials. “This novel approach for obtaining atomicity-defined quasi-sub-nanomaterials without the limitations of conventional methods has the potential to play an important role in exploring the last frontiers of nanomaterials,” says Prof. Tsukamoto. Indeed, this may be a “small” step for Tokyo Tech, but a “giant” step for nanoscience!