Multi-layered graphene is a promising carbon-based nanomaterial for a variety of next-generation technologies, but the relationships between its surface structures and properties are not entirely clear. Now, in a recent study, Pusan National University scientists analyze how surface structures like wrinkles and folded networks affect nanoscale friction in multi-layered graphene. Their findings could pave the way for graphene-based solid lubricants and micro/nano-scale mechanical devices.

Graphene, which consists of a single layer of carbon atoms, is the poster child of carbon-based 2D nanomaterials. It has many attractive properties that could be exploited in next-generation electronics, optics, catalysis, biomedicine, and many other fields. Recently, many scientists have focused on chemical vapor deposition (CVD) as a cost-efficient technique for producing larger graphene surfaces in lieu of the well-established method of mechanical exfoliation, which can only produce small graphene islands.

However, CVD graphene contains a fair number of surface structures and defects, including wrinkles, crystal grain boundaries, and surface contamination. Because graphene is so thin, even minor surface irregularities can greatly affect its properties, making its surface-property relationships an important area of research. While studies on this topic have been conducted extensively for single-layer CVD graphene, few have focused on how surface structures affect the nanoscale friction characteristics of multi-layered CVD graphene. 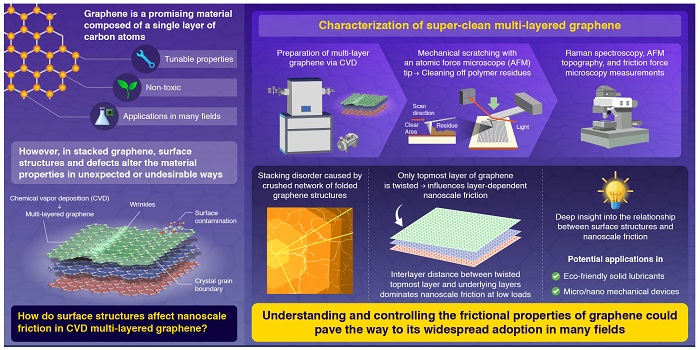 Link between surface structure and nanoscale friction in stacked graphene.

Recently, a team of researchers from Pusan National University, Korea, led by Assistant Professor Songkil Kim tackled this knowledge gap. “Correlating surface characteristics with a material’s properties is really important,” explains Dr. Kim, “Imagine you are stacking papers, and there is a huge compressive strain over these papers. This could cause massive structural deformations within the stacked layers and the surface. Similarly, the structural changes that occur in multi-layered graphene can affect its surface properties, such as its friction, which is what we focused on.” Their paper was made available online on January 24, 2022, and published in Volume 584 of Applied Surface Science on May 15, 2022.

The team first used the atom-sized tip of an atomic force microscope (AFM) to scratch the surface of CVD multi-layer graphene, cleaning off any polymeric residues. Then, they used AFM imaging, friction force microscopy, and Raman spectroscopy to identify and study various surface structures and how they affect nanoscale friction. Interestingly, they found that only the top-most layer of graphene was twisted with respect to the rest, which influenced the layer-dependent nanoscale friction in a way that varied according to the applied load.

Overall, this study’s findings could pave the way for interesting mechanical applications for CVD graphene. “Graphene and similar materials can be used as solid lubricants,” comments Dr. Kim, “Whereas liquid lubricants like motor oils are not suitable for harsh environment such as outer space or the polar regions, the excellent robustness and frictional properties of graphene make it an attractive non-toxic alternative.”

Interestingly, developing high-performance lubricants has environmental benefits since reducing friction is essential to prevent energy losses in mechanical systems. Another potential application for multi-layered CVD graphene is in micro/nano-devices, where a precise control of friction is necessary.

With any luck, further research will allow us to harness the powers of graphene and help push the boundaries of technology further.