A Zigzag Blueprint for Topological Electronics

A collaborative study led by the University of Wollongong confirms switching mechanism for a new, proposed generation of ultra-low energy ‘topological electronics’.

Such topological electronics could radically reduce the energy consumed in computing and electronics, which is estimated to consume 8% of global electricity, and doubling every decade.

Led by Dr Muhammad Nadeem at the University of Wollongong (UOW), the study also brought in expertise from FLEET Centre collaborators at UNSW and Monash University.

Resolving the switching challenge, and introducing the TQFET

Two-dimensional topological insulators are promising materials for topological quantum electronic devices where edge state transport can be controlled by a gate-induced electric field.

However, a major challenge with such electric-field-induced topological switching has been the requirement for an unrealistically large electric field to close the topological bandgap.

The cross-node and interdisciplinary FLEET research team studied the width-dependence of electronic properties to confirm that a class of material known as zigzag-Xene nanoribbons would fulfil the necessary conditions for operation, namely:

1– Spin-filtered chiral edge states in zigzag-Xene nanoribbons remain gapless and protected against backward scattering
2– The threshold voltage required for switching between gapless and gapped edge states reduces as the width of the material decreases, without any fundamental lower bound
3– Topological switching between edge states can be achieved without the bulk (ie, interior) bandgap closing and reopening
4– Quantum confined zigzag-Xene nanoribbons may prompt the progress of ultra-low energy topological computing technologies.

Zigzag Xenes could be key

Graphene was the first confirmed atomically-thin material, a 2D sheet of carbon atoms (group IV) arranged in a honeycomb lattice. Now, topological and electronic properties are being investigated for similar honeycomb sheets of group-IV and group-V materials, collectively called 2D-Xenes. 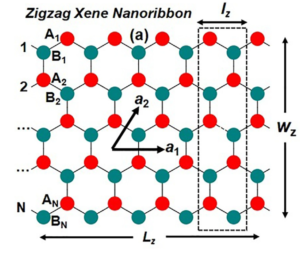 2D-Xenes are topological insulators – ie, electrically insulating in their interior but conductive along their edges, where electrons are transmitted without dissipating any energy (similar to a superconductor). When a 2D-Xene sheet is cut into a narrow ribbon terminated on ‘zigzag’ edges, known as zigzag-Xene-nanoribbons, it retains the conducting edge modes characteristic of a topological insulator, which are thought to retain their ability to carry current without dissipation.

It has recently been shown that zigzag-Xene-nanoribbons have potential to make a topological transistor which can reduce switching energy by a factor of four.

The new research led by UOW found the following:

Maintaining edge states Measurements indicated that spin-filtered chiral edge states in zigzag-Xene nanoribbons remain gapless and protected against the backward scattering that causes resistance, even with finite inter-edge overlapping in ultra-narrow ribbons (Meaning that a 2D quantum spin Hall material undergoes a phase transition to a 1D topological metal.) This is driven by the edge states intertwining with intrinsic band topology-driven energy-zero modes.

“Quantum confined zigzag-Xene-nanoribbons are a special class of topological insulating materials where the energy gap of the bulk sample increases with a decrease in width, while the edge state conduction remains robust against dissipation even if the width is reduced to a quasi-one-dimension,” says FLEET researcher and collaborator on the new study A/Prof Dmitrie Culcer (UNSW). “This feature of confined zigzag-Xene-nanoribbons is in stark contrast to other 2D topological insulating materials in which confinement effects also induce an energy gap in the edge states.”

Low threshold voltage Due to width- and momentum-dependent tunability of gate-induced inter-edge coupling, the threshold-voltage required for switching between gapless and gapped edge states reduces as the width of the material decreases, without any fundamental lower limit.

Along with vastly different conduction and switching mechanisms, the technological aspects required for fabricating a topological quantum field effect transistor with zigzag-Xene-nanoribbons also radically differ from those of MOSFETs: There is no fundamental requirement of specialized technological/isolation techniques for a low-voltage TQFET with an energy-efficient switching mechanism.