A key transistor component is made from the edge of a sheet of graphene.

The ever-shrinking features of transistors etched in silicon have always required pushing the cutting edge of manufacturing technology. The discovery of atomically thin materials like graphene and carbon nanotubes, however, raised the prospect of replacing our manufacturing needs with the natural properties of these materials. There's no need to etch a 1 nanometer feature into silicon if you could simply use a carbon nanotube that's 1 nanometer wide.

And there have been some notable successes, such as a 1 nanometer gate made of a single carbon nanotube. But the work often involves a difficult process of getting the atomically thin materials in the right place to create a functional device. And the rest of the hardware is typically made of bulkier materials that are borrowed from more traditional transistor design.

A new paper released this week, however, describes a record-setting design that has the smallest transistor gate length yet reported. The record was set by the edge of a graphene sheet, meaning the gate is only a single carbon atom across. And, by using a second atomically thin material for a key component (plus a clever arrangement of parts), the team behind the design has made sure that the whole transistor is easy to make and relatively compact.

A standard transistor design involves two conductive electrodes—the source and the drain—separated by a piece of semiconductor. The state of the semiconductor, meaning whether it's conducting or insulating, is set by a third conductive electrode called the gate. While there are a number of measures for the size of the transistor, the gate length is one of the most important.

That left the gate. In the previous 1 nanometer device, the gate was made of a single carbon nanotube. Getting smaller than that is difficult but not impossible. Graphene sheets are like flattened-out carbon nanotubes: a sheet of carbon atoms linked together. While the length and width of the sheet are going to be much larger than a nanotube, the thickness will only be a single carbon atom thick. So, if you could use the edge of a graphene sheet as the gate, you could get an extremely small gate length.

All these materials, however, have been used in myriad test devices already. The secret to the new work is how they're arranged. Part of this arrangement is needed simply to get the edge of a graphene sheet in the right orientation to act as a gate. But a significant benefit of the design is that it's reasonably easy to make, in that it doesn't require extremely precise positioning of either of the atomically thin materials.

To make the device, the researchers started with layers of silicon and silicon dioxide. The silicon was purely structural—there's no silicon in the transistor itself. A graphene sheet was layered on top of the silicon and silicon dioxide to create the gate material. On top of that, the researchers placed a layer of aluminum. While aluminum is a conductor, the researchers let it sit in the air for a few days, during which the surface oxidized to aluminum oxide. So, the bottom surface of the graphene sheet was on silicon dioxide, and the top was covered by aluminum oxide, both of which are insulators. This isolated everything but the edge of the graphene from the rest of the transistor hardware.

To expose the edge of the graphene in a useful way, the researchers simply etched along the edge of the aluminum, down into the underlying silicon dioxide. This cut through the graphene sheet, exposing a linear edge that can be used as the gate. At this point, the whole device is covered with a thin layer of hafnium oxide, an insulator that provided a bit of space between the gate and the rest of the hardware. 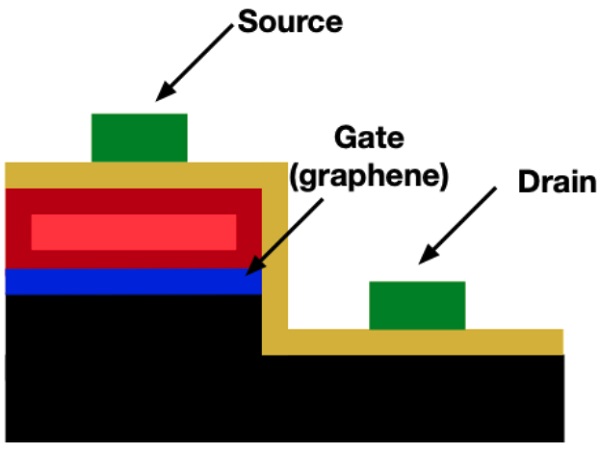 The structure of the device. The black is the silicon dioxide base, blue is graphene, red is the aluminum/aluminum oxide layer, and yellow is the molybdenum dioxide. The hafnium oxide layer isn't shown.

Next up, a flake of the molybdenum disulfide semiconductor was layered over the entire (now three-dimensional) structure. As a result of this, the edge of the graphene (now embedded in the wall of the vertical portion of the device) was in close proximity to the molybdenum disulfide. The edge of the graphene could now act as a gate to control the conductivity of the semiconductor. And the length of the gate was the thickness of the graphene sheet—a single carbon atom, or 0.34 nanometers.

From there, the team simply placed source and drain electrodes on either side of the gate. The three-dimensional arrangement made that easy. The source was placed on top, and the drain was placed on the bottom, with the vertical wall in between. (The researchers call their device a side-wall transistor, since the gate is located in the middle of that wall.)

Not just a design

While a lot of the properties of the device were figured out using modeling, the researchers have clearly built dozens of transistors. Some of these were sacrificed for imaging and to confirm that the materials were all in the places expected based on the manufacturing process. But others were used to show that the hardware did work as a transistor, although it required a reasonably high voltage to do so. It also had a low enough leakage to work for low-powered operations.

The researchers suggested a variety of ways the transistor could be improved, of course. But the performance of these early demo devices are beside the point, beyond the fact that it was functional.

The really important thing here is that the researchers figured out a way to really take advantage of the smallest dimension of an atomically thin material as part of a functional transistor. And they did so without requiring an especially exacting positioning when the graphene and molybdenum sulfide were added to the device. That's in part because the part of the graphene that needed exact positioning—the edge—was created by etching. And the molybdenum disulfide just had to be located well enough to cover the gate and extend to where the source and drain could be hooked up.

Ease of positioning is a long way from what we'd need to fabricate billions of devices based on this structure. But it's certainly a necessary step to get there.