An inhalable "aerogel" loaded with DNA that encodes for the SARS-CoV-2 spike protein successfully induces an immune response against COVID-19 in the lungs of mice, according to new research conducted at Penn State. The team said its aerogel could be used to create an inhalable vaccine that blocks SARS-CoV-2 transmission by preventing the virus from establishing an infection in the lungs.

“There are many potential advantages of an inhalable formulation compared to an injectable vaccine,” said Atip Lawanprasert, graduate student in biomedical engineering and a lead author of the study, which published recently in the journal Biomacromolecules. “One is avoidance of needles. Inhalable vaccines might be able to help increase the rate of vaccination because so many people are afraid of injections. No matter how high the efficacy of a vaccine, if people don’t get it, then it’s not useful.”

“Importantly,” Medina said, “inhalable vaccines may induce an antibody response locally in the lungs where it can potentially neutralize and clear the virus before it fully infects the host and causes symptoms.”

By contrast, Girish Kirimanjeswara, associate professor of veterinary and biomedical sciences, explained that the injectable COVID-19 vaccines induce a systemic immune response, which is effective at fighting infections with SARS-CoV-2, but not as potent as an inhalable vaccine would be in stopping the infection at the location of the virus’s entry into the body.

“The current vaccines are not very good at preventing transmission because they allow the virus to replicate in the body, even for a short period, and then transmit to other individuals,” said Kirimanjeswara. “An inhalable vaccine would elicit local immunity at the primary site of infection, where SARS-CoV-2 could be rapidly neutralized and eliminated without the inflammatory response characteristic of systemic vaccination.” 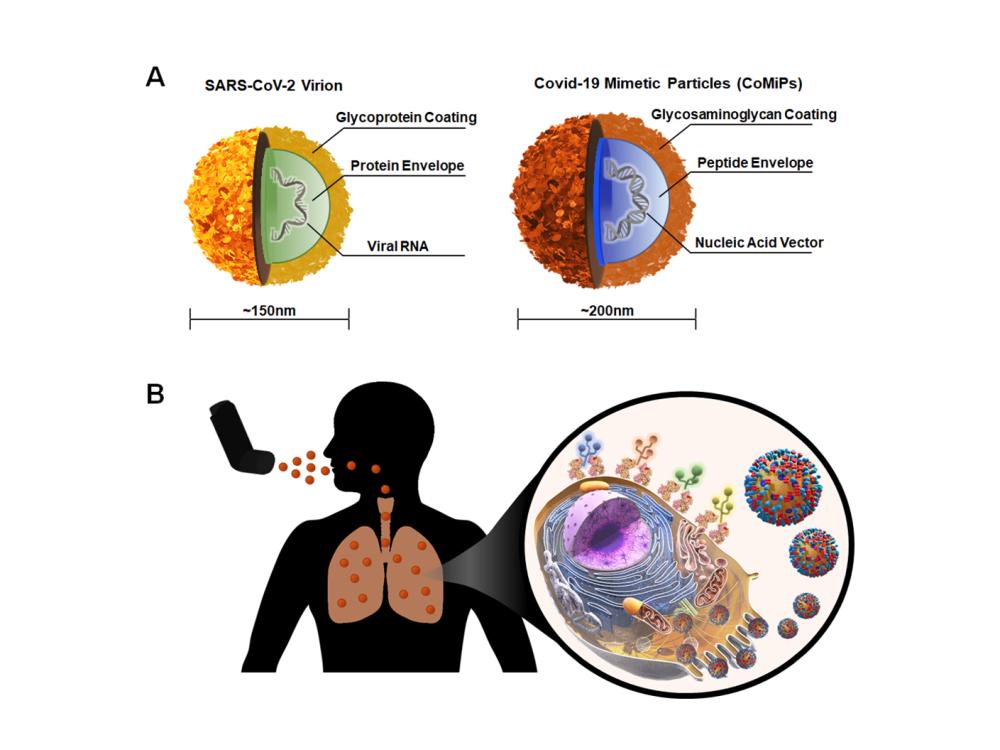 (A) Illustration demonstrating the structural and compositional similarities between the SARS-CoV-2 virion (left) and the team's CoMiP (right). (B) CoMiP carriers engage receptors on the surfaces of alveolar macrophages in the lung tissue to gain intracellular entry. Subsequent expression of nucleic acid cargo leads to the presentation of various encoded SARS-CoV-2 antigens to stimulate local mucosal immunity.

Previously, the team had developed and patented a gel-like material, called an "aerogel," as a vehicle for delivering antimicrobials to the lungs to treat bacterial respiratory infections, particularly tuberculosis.

“When the pandemic started, we decided to develop an inhalable formulation for COVID-19 by combining our aerogel with a nucleic acid-encoded antigen — specifically, DNA that encodes the SARS-CoV-2 proteins,” said Medina.

“Alveolar macrophages represent attractive targets for inhalable vaccines because they are abundant within the lungs, and previous evidence has suggested that they may be important in early COVID-19 pathogenesis,” said Medina.

Specifically, he explained, alveolar macrophages may be one of the first cells to become infected by SARS-CoV-2 when the virus is inhaled.

“Alveolar macrophages are one of our key defenders against viral infection because they serve to present antigens to the rest of the immune system,” said Medina.

The scientists designed their CoMiPs to be rapidly ingested by alveolar macrophages, after which the macrophages would interpret the viral antigen and begin to express the viral proteins encoded in the DNA.

“You are essentially tricking the macrophage into interpreting this DNA and expressing this foreign spike protein,” said Medina. “Once it expresses the foreign protein, it shows it to the rest of the immune system so the immune system can learn to recognize the protein in the event of a SARS-CoV-2 infection.”

In the laboratory, when the scientists incubated their CoMiPs with cells designed to mimic naive alveolar immune cells, they found that the macrophages readily internalized the CoMiPs. Next, they optimized the formulation of the CoMiPs to identify the maximum safe dose in cells in vitro. They found that >80% of cells remained viable at a dose of ≤0.01 mg/mL.

To test the efficacy of the CoMiP vaccine, the team immunized mice via an intranasal installation of the vaccine, followed by a booster dose two weeks later. Next, they collected serum samples from the animals on days 14 and 28 post vaccination and booster, respectively. They analyzed these samples for systemic immune responses and found no statistically significant change in systemic antibody levels between CoMiP-treated animals and control animals at either sampling time point.

To explore nose, throat and lung immune responses, the researchers collected samples from immunized mice 30 days after vaccination to assess differences in the total and spike-protein specific lung mucosal IgA antibodies. They found a significant increase in the total IgA for mice vaccinated with CoMiPs, but IgA specifically targeting the SARS-CoV-2 spike protein was lower than expected for the vaccinated animals.

“On the benchtop, outside of the animal, we saw pretty good expression of the proteins,” said Medina. “And then when the CoMiPs were delivered into the animal, we saw an increase in antibodies in the lung that may provide some protection, but it was not to the extent that we would like. It’s encouraging data, but there is more optimization to be done.”

The team plans to continue to research the use of CoMiPs to protect against COVID-19.

In addition, Kirimanjeswara noted, “Transmission blocking, inhalable vaccines can also be translated to multiple other viruses, such as flu, so our CoMiP has the potential to be widely applicable.”