Researchers at the University of Tsukuba study the effects of temperature on the nonlinear optical response of nitrogen-vacancy defects in a diamond, which may lead to new heat detection methods for nanotech devices.

Scientists from the Faculty of Pure and Applied Sciences at the University of Tsukuba have developed a method for monitoring the temperature using the naturally occurring atom-like defects in diamonds. They found that increased heat led to reduced intensity of the nonlinear harmonic generation of light. This work may lead to highly accurate nano-sized thermometers.

Nanotechnology is playing an increasingly important role in new devices, and the ability to measure temperatures at small scales grows ever more vital. Conventional thermometers are often too large or not practical for many applications that involve length scales smaller than a few hundred nanometers. Thus, new approaches are needed for tiny, non-contact temperature sensors.

Now, a team of researchers from the University of Tsukuba and Japan Advanced Institute of Science and Technology (JAIST) have taken advantage of the nonlinear optical properties of a particular kind of defect in diamonds which are made of carbon atoms arranged in a diamond cubic lattice. Nitrogen-vacancy (NV) defects are naturally occurring flaws in diamonds in which two adjacent carbon atoms have been replaced by a nitrogen atom and a hole. They have attracted a great deal of attention because they are easy to obtain and have unusual quantum and nonlinear optical properties. Among them is the ability to combine two or even three photons together into a single high-energy photon in a process called harmonic generation. 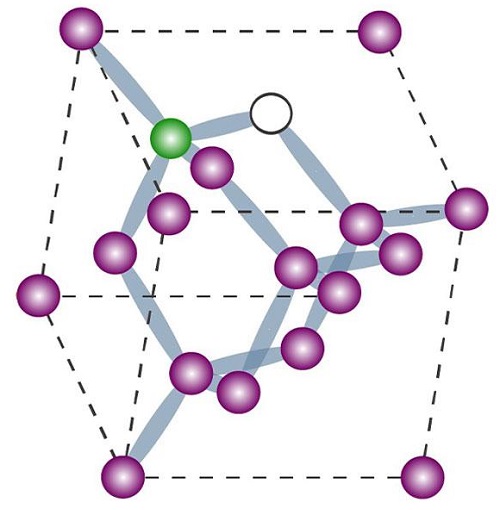 Researchers at the University of Tsukuba study the effects of temperature on the nonlinear optical response of nitrogen-vacancy defects in a diamond, which may lead to new heat detection methods for nanotech devices.

Using infrared ultrashort pulse laser stimulation, the team found that the harmonic generation decreased with temperature over the range of 20-300°C. "This study presents an efficient and viable way for creating diamond-based nonlinear optical temperature sensing," first author Dr. Aizitiaili Abulikemu says. This temperature-dependent change was explained by mismatch due to the speed of different colors of light in the diamond. That is, as the atomic lattice heats up, the difference in the index of refraction between the original light and the higher energy light created by harmonic generation grows larger, which decreases the efficiency of harmonic generation.

"Diamonds can be processed into a tiny tip for a probe as part of a nanometer-scale temperature sensor," senior author Professor Muneaki Hase says. Future applications might even include a thermometer small enough to find inside a living cell, which could be detected remotely with a laser.