A New Class of Materials for Nanoscale Patterning

Recent research demonstrates how a new class of polymers can produce small, precise patterns on the nanometer scale, with future implications for large-scale computer chip fabrication.

Fabricating the large numbers of computer chips that are found in a multitude of everyday objects, from cell phones to car navigation systems, relies on the use of precise, microscopic stencils that can add patterns to electronics with incredibly high fidelity. But as these chips become even more widely used and adapted to work in increasingly computationally intensive devices, these stencils and patterns must also become even smaller and more precise. 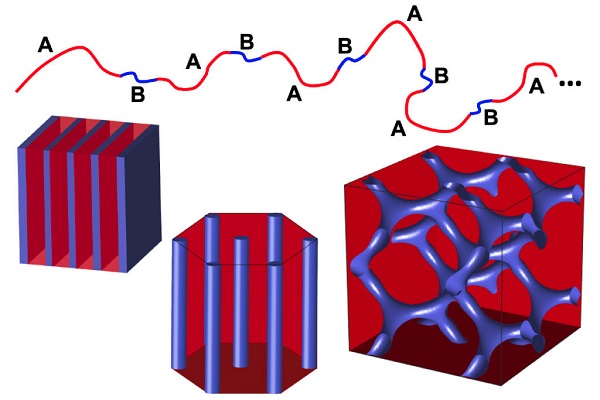 The researchers developed a way of alternating between “blocks” of two types of polymer with precise lengths. These “multiblock copolymers” spontaneously form layered and cylindrical structures, which could be used for nanopatterning, a way of manufacturing microscopic components. The researchers also demonstrated a “double gyroid” structure which could be used for more complicated nanopatterning templates.

To help address this challenge, researchers in the School of Engineering and Applied Science recently demonstrated how a new class of polymers can produce small, precise patterns on thin films at the nanometer scale. The study, published in ACS Central Science, was led by Karen Winey, Harold Pender Professor in the departments of Materials Science and Engineering and Chemical and Biomolecular Engineering, and graduate student Jinseok Park.

Working in collaboration with colleagues from the University of Konstanz, the researchers optimized a method for directed self-assembly, where polymers are designed to produce a prespecified geometry, in a way that provides more precise control of the patterning. Their approach uses “multiblock” copolymers instead of current self-assembly methods that use diblocks. Winey explains that using multiblock copolymers can “offer a wider range of chemistries and greater molecular control.”

The researchers are now investigating how to best convert these thin film structures into functional nanopatterning stencils, as well as developing a library of different multiblock copolymer chemistries that can form double gyroid structures.