The approach has implications for improving water scarcity around the world, researchers say.

The United Nations’ most recent Intergovernmental Panel on Climate Change report paints a bleak picture for the world’s water supply: Of the 7.8 billion people on Earth, about 4 billion do not have access to sufficiently clean water for at least a month every year. While several water purification schemes have been proposed, they consistently fail at some critical point — typically, they are not stable, big or hardy enough for real-world applications, according to researchers based at Technical Institute of Physics and Chemistry, Chinese Academy of Sciences and Xiamen University in China who may have cracked the problem.

On March 22 in Nano Research, they reported the details of a new platform that uses sunlight to purify seawater with high energy efficiency comparing with other similar approaches (above 90%) while also avoiding common pitfalls. 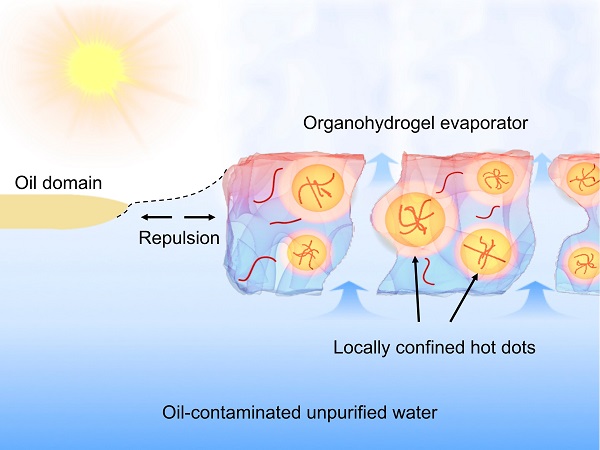 “There is a tremendous demand for freshwater in households and for industrial, agricultural and other applications, so various water purification technologies have been developed to alleviate the shortage of freshwater resources,” said paper author Miao Wang, Xiamen University’s College of Materials. “Comparing the pathways, solar-driven purification of seawater or contaminated water via interfacial evaporation is promising as a low-cost system.”

Such purification approaches use sunlight to heat water at its surface, evaporating the liquid and separating the polluted or salty counterparts from the water molecules, which then escape into the air as vapor to enter the natural cycle of condensation to become clean, consumable water. The problem, according to paper author Xu Hou, Xiamen University’s College of Chemistry and Chemical Engineering, and College of Physical Science and Technology, is that attempts to scale this approach for real-world application have been hindered by oil contamination, instability, salt-crystallization and complicated fabrication processes.

“To generate more purified water under the same amount of sunlight, how do we acquire more energy to locally heat water to improve the vaporization rate — without encountering the drawbacks of other approaches?” Hou asked. “We answered that question and designed an ultra-stable, salt-resistant evaporator platform that can maintain accelerated evaporation while also continuing to repulse oil to prevent contamination.”

The researchers combined two gels in an oil-in-water emulsion. The gel material, called organohydrogel, can shift between phases of matter but is largely liquid contained in a web of molecular chains. By dosing the organohydrogel with carbon nanotubes, the researchers created “hot spots” that can locally focus solar light to the surface of the water, preventing the dissipation of heat throughout the area. The branched structure of the material also helps impede energy dissipation and aids in molecule transfer to prevent salt crystallization.

The organohydrogel has a low density, so when dipping below the water surface level, it can self-float again for enduring evaporation process. The raised water surrounds the evaporator, creating a lateral capillary repulsion effect in which the oil molecules peel away from the water being heated, like mercury pulling away from the glass of a thermometer.

In experimental tests, the platform evaporated about 2.4 kilograms of water per square meter per hour and could persist for 240 hours without extra disposal needed — even in conditions of “tremendous oil contamination,” said paper author Shutao Wang, Chinese Academy of Sciences (CAS) Key Laboratory of Bio-inspired Materials and Interfacial Science, Technical Institute of Physics and Chemistry.

“We developed an anti-oil-fouling heating platform with remarkable solar energy utilization, which shows great potential for practical, solar-driven water purification even in heavily contaminated water,” Wang said, “We hope that this economic and environmentally friendly approach will aid in further relieving the global scarcity of freshwater resources.”