Quantum bits (qubits) are the smallest units of information in a quantum computer. Currently, one of the biggest challenges in developing this kind of powerful computer is scalability. A research group at the University of Basel, working with the IBM Research Laboratory in Rüschlikon, has made a breakthrough in this area.

Quantum computers promise unprecedented computing power, but to date prototypes have been based on just a handful of computing units. Exploiting the potential of this new generation of computers requires combining large quantities of qubits.

It is a scalability problem which once affected classic computers, as well; in that case it was solved with transistors integrated into silicon chips. The research team led by Dr. Andreas Kuhlmann and Professor Dominik Zumbühl from the University of Basel has now come up with silicon-based qubits that are very similar in design to classic silicon transistors. The researchers published their findings in the journal Nature Electronics. 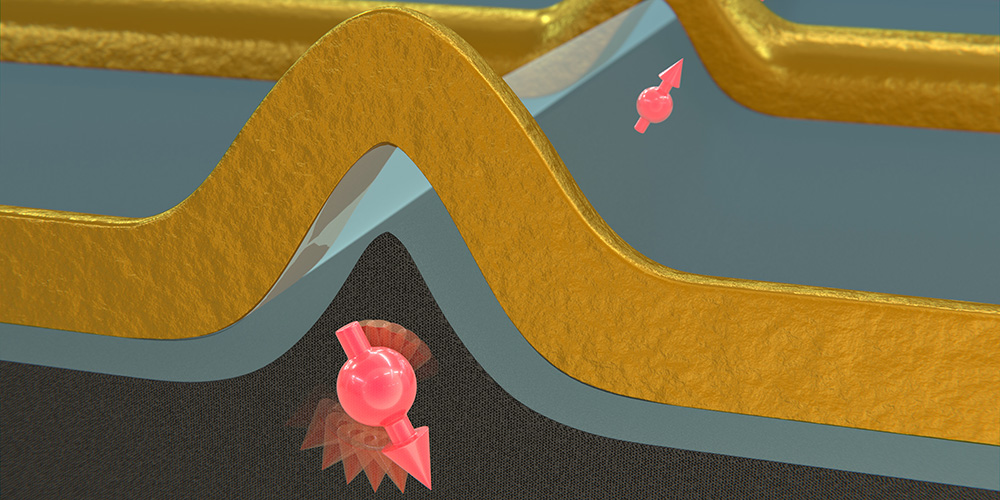 The newly developed qubits are based on so-called holes (red) whose spin (arrow) in one or the other direction stores the information. They are arranged in an architecture based on silicon transistors.

In classic computers, the solution to the scalability problem lay in silicon chips, which today include billions of “fin field-effect transistors” (FinFETs). These FinFETs are small enough for quantum applications; at very low temperatures near absolute zero (0 kelvin or -273.15 degrees Celsius), a single electron with a negative charge or a “hole” with a positive charge can act as a spin qubit. Spin qubits store quantum information in the two states spin-up (intrinsic angular momentum up) and spin-down (intrinsic angular momentum down).

The qubits developed by Kuhlmann’s team are based on FinFET architecture and use holes as spin qubits. In contrast with electron spin, hole spin in silicon nanostructures can be directly manipulated with fast electrical signals.

Another major obstacle to scalability is temperature; previous qubit systems typically had to operate at an extremely low range of about 0.1 kelvin. Controlling each qubit requires additional measuring lines to connect the control electronics at room temperature to the qubits in the cryostat – a cooling unit which generates extremely low temperatures. The number of these measuring lines is limited because each line produces heat. This inevitably creates a bottleneck in the wiring, which in turn sets a limit to scaling.

Circumventing this ”wiring bottleneck” is one of the main goals of Kuhlmann’s research group, and requires measurement and control electronics to be built directly into the cooling unit. “However, integrating these electronics requires qubit operation at temperatures above 1 kelvin, with the cooling power of the cryostats increasing sharply to compensate for the heat dissipation of the control electronics,” explains Dr. Leon Camenzind of the Department of Physics at the University of Basel. Doctoral student Simon Geyer, who shares lead authorship of the study with Camenzind, adds, “We have overcome the 4 kelvin-mark with our qubits, reaching the boiling point of liquid helium. Here we can achieve much greater cooling power, which allows for integration of state-of-the-art cryogenic control technology.”

Working with proven technology such as FinFET architecture to build a quantum computer offers the potential for scaling up to very large numbers of qubits. “Our approach of building on existing silicon technology puts us close to industry practice,” says Kuhlmann. The samples were created at the Binnig and Rohrer Nanotechnology Center at the IBM Research Zurich laboratory in Rüschlikon, a partner of the NCCR SPIN, which is based at the University of Basel and counts the research team as a member.