Graphene Gets Enhanced By Flashing

Flashing graphene into existence from waste was merely a good start. Now Rice University researchers are customizing it.

The Rice lab of chemist James Tour has modified its flash Joule heating process to produce doped graphene that tailors the atom-thick material’s structures and electronic states to make them more suitable for optical and electronic nanodevices. The doping process adds other elements to graphene’s 2D carbon matrix.

The process takes about one second, is both catalyst- and solvent-free, and is entirely dependent on “flashing” a powder that combines the dopant elements with carbon black.

Doping graphene is possible through bottom-up approaches like chemical vapor deposition or synthetic organic processes, but these usually yield products in trace amounts or produce defects in the graphene. The Rice process is a promising route to produce large quantities of “heteroatom-doped” graphene quickly and without solvents, catalysts or water. 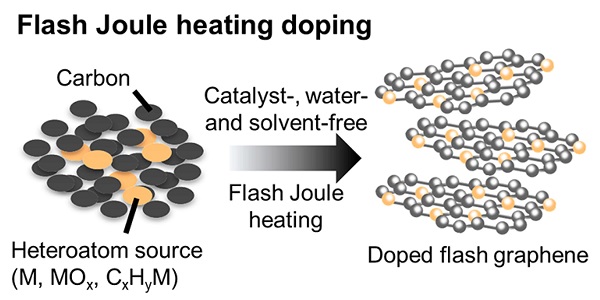 “This opens up a new realm of possibilities for flash graphene,” Tour said. “Once we learned to make the original product , we knew the ability to directly synthesize doped turbostratic graphene would lead to many more options for useful products. These new atoms added to the graphene matrix will permit stronger composites to be made since the new atoms will bind better to the host material, such as concrete, asphalt or plastic. The added atoms will also modify the electronic properties, making them better-suited for specific electronic and optical devices.”

Graphene is turbostratic when stacks of the 2D honeycomblike lattices don’t align with one another. This makes it easier to disperse the nanoscale sheets in a solution, producing soluble graphene that is much simpler to incorporate into other materials, Tour said.

The lab tested various doped graphenes in two scenarios: electrochemical oxygen reduction reactions (ORR) that are key to catalytic devices like fuel cells, and as part of an electrode in lithium metal batteries that represent the next generation of rechargeable batteries with high energy densities. 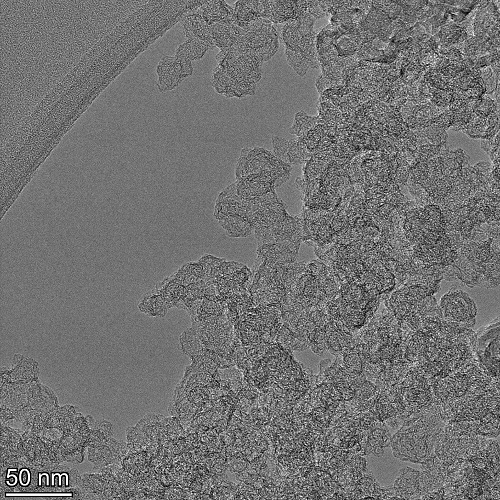 A transmission electron microscope image of flash graphene co-doped with boron and nitrogen.