Cartilage injuries are often devastating and most of them have no cures due to the intrinsically low regeneration capacity of cartilage tissues. The rise of 3D stem cell culture systems has led to breakthroughs in developmental biology, disease modeling, and regenerative medicine.

For example, stem cells, once transplanted successfully, could initially secret trophic factors for reducing inflammation at sites of cartilage injuries and then differentiate into cartilage cells (e.g., chondrocytes) for functional restoration.

Nevertheless, there are critical barriers remaining to be overcome before the therapeutic potential of stem cell therapies can be realized. The limited control over the chondrogenic differentiation of stem cells in vivo has often resulted in compromised regenerative outcomes.

Moreover, due to the prevalence of oxidative stress and inflammation in the microenvironment of injury sites, stem cells frequently undergo apoptosis after injection. 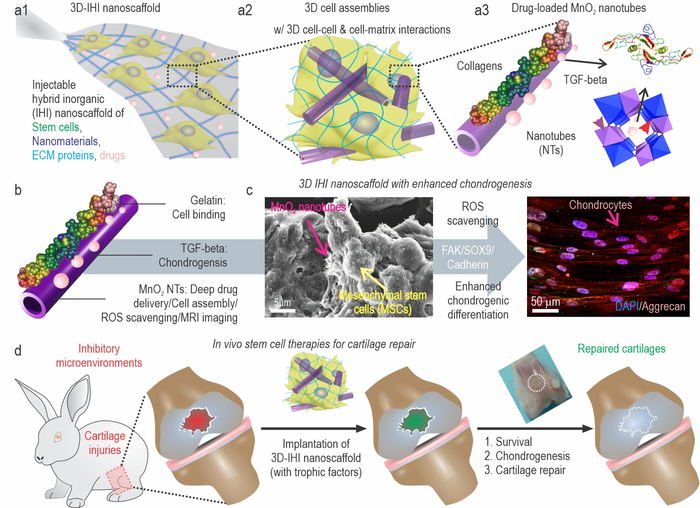 a) A schematic illustration of 3D TGFβ-BMSC-IHI nanoscaffold. b) The schematic illustration of gelatin-coated and TGF-β3-loaded MnO2 NTs. c) The FESEM image indicated that most of the BMSCs form contacts with other cells and the 1D fibril-like structures, which was similar to the structures of natural tissues. d) By remodeling the oxidative microenvironment, enhancing cell viability, and chondrogenesis of transplanted cells, cartilage regeneration could be finally achieved.

To address these challenges, they demonstrated the development of a 3D IHI nanoscaffold-templated stem cell assembly system for advanced 3D stem cell culture and implantation.

In this way, accelerated repair of cartilage defects with rapid tissue reconstruction and functional recovery is realized both in the short term and long term. Given the excellent versatility and therapeutic outcome of 3D-IHI nanoscaffold-based cartilage regeneration, it may provide promising means to advance a variety of tissue engineering applications.