Extract from a Common Kitchen Spice Could be Key to Greener, More Efficient Fuel Cells

Turmeric, a spice found in most kitchens, has an extract that could lead to safer, more efficient fuel cells.

Researchers at the Clemson Nanomaterials Institute (CNI) and their collaborators from the Sri Sathya Sai Institute of Higher Learning (SSSIHL) in India discovered a novel way to combine curcumin — the substance in turmeric — and gold nanoparticles to create an electrode that requires 100 times less energy to efficiently convert ethanol into electricity.

While the research team must do more testing, the discovery brings replacing hydrogen as a fuel cell feedstock one step closer.

“Of all the catalysts for alcohol oxidation in alkaline medium, the one we prepared is the best so far,” said Apparao Rao, CNI’s founding director and the R. A. Bowen Professor of Physics in the College of Science’s.

Fuel cells generate electricity through a chemical reaction instead of combustion. They are used to power vehicles, buildings, portable electronic devices and backup power systems. 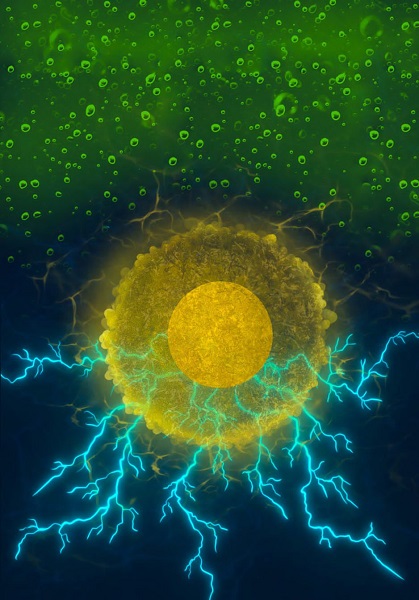 In this illustration, the green fuel (alcohol) is represented by the green-colored droplets at the top of the image. When it interacts with curcumin enveloped gold nanoparticles, it efficiently yields energy (sparks at the bottom of the image).

Hydrogen fuel cells are highly efficient and do not produce greenhouse gases. While hydrogen is the most common chemical element in the universe, it must be derived from substances such as natural gas and fossil fuels because it occurs naturally on Earth only in compound form with other elements in liquids, gases or solids. The necessary extraction adds to hydrogen fuel cells’ cost and environmental impact.

In addition, hydrogen used in fuel cells is a compressed gas, creating challenges for storage and transportation. Ethanol, an alcohol made from corn or other agricultural-based feeds, is safer and easier to transport than hydrogen because it is a liquid.

“To make it a commercial product where we can fill our tanks with ethanol, the electrodes have to be highly efficient,” said Lakshman Ventrapragada, a former student of Rao’s who worked as a research assistant at the CNI and is an alumnus of SSSIHL. “At the same time, we don’t want very expensive electrodes or synthetic polymeric substrates that are not eco-friendly because that defeats the whole purpose. We wanted to look at something green for the fuel cell generation process and making the fuel cell itself.”

The researchers focused on the fuel cell’s anode, where the ethanol or other feed source is oxidized. Fuel cells widely use platinum as a catalyst. But platinum suffers from poisoning because of reaction intermediates such as carbon monoxide, Ventrapragada said. It is also costly.

The researchers used gold as a catalyst. Instead of using conducting polymers, metal-organic frameworks, or other complex materials to deposit the gold on the surface of the electrode, the researchers used curcumin because of its structural uniqueness. Curcumin is used to decorate the gold nanoparticles to stabilize them, forming a porous network around the nanoparticles. Researchers deposited the curcumin gold nanoparticle on the surface of the electrode at a 100 times lower electric current than in previous studies.

Without the curcumin coating, the gold nanoparticles agglomerate, cutting down on the surface area exposed to the chemical reaction, Ventrapragada said.

“Without this curcumin coating, the performance is poor,” Rao said. “We need this coating to stabilize and create a porous environment around the nanoparticles, and then they do a super job with alcohol oxidation.

“There’s a big push in the industry for alcohol oxidation. This discovery is an excellent enabler for that. The next step is to scale the process up and work with an industrial collaborator who can actually make the fuel cells and build stacks of fuel cells for the real application,” he continued.

But the research could have broader implications than improved fuel cells. The electrode’s unique properties could lend itself to future applications in sensors, supercapacitors and more, Ventrapragada said.

In collaboration with the SSSIHL research team, Rao’s team is testing the electrode as a sensor that could help identify changes in the level of dopamine. Dopamine has been implicated in disorders such as Parkinson’s disease and attention deficit hyperactivity disorder. When members of the research team tested urine samples obtained from healthy volunteers, they could measure dopamine to the approved clinical range with this electrode using a cost-effective method compared to standard ones used today, Rao said.

“In the beginning stages of the project, we did not imagine other applications that gold-coated curcumin could support. However, before the end of the alcohol oxidation experiments, we were fairly confident that other applications are possible,” Ventrapragada said. “Although we don’t have a complete understanding of what’s happening at the atomic level, we know for sure that curcumin is stabilizing the gold nanoparticles in a way that it can lend itself to other applications.”

The journal Nano Energy published the findings in a paper titled, “Green synthesis of a novel porous gold-curcumin nanocomposite for super-efficient alcohol oxidation.” Ventrapragada designed the experiment during his thesis work in Rao’s CNI lab. Following Ventraprada’s graduation, the electrode was characterized and tested by the SSSIHL research team from India, which includes Sai Prasad Nayak, J.K. Kiran Kumar, and Sai Sathish Ramamurthy.