Vaccines can be made over 25% more effective by adding left-handed chiral gold nanoparticles as adjuvants, according to a study by an international collaboration in which Brazilian researchers took part. An article reporting the results is published in Nature.

Three research groups collaborated on the study, one affiliated with the University of Michigan in the United States, and another with Jiangnan University in China. The Brazilian group was led by André Farias de Moura, a professor in the Chemistry Department at the Federal University of São Carlos (UFSCar) and a researcher with the Center for Development of Functional Materials (CDMF), one of the Research, Innovation and Dissemination Centers (RIDCs) funded by FAPESP. 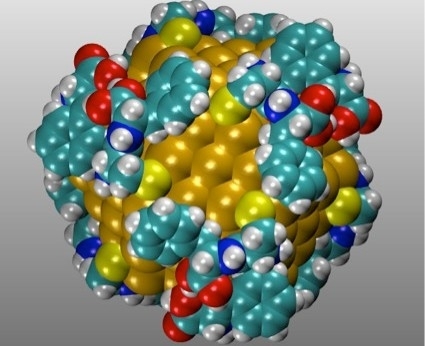 Computational model of gold nanoparticle functionalized with left-handed enantiomers of cysteine and phenylalanine.

The study was also supported by FAPESP via a research grant awarded to Moura.

It did not involve COVID-19 vaccines because it began well before the pandemic. The researchers used vaccines developed to combat a specific influenza virus strain. While this is not the strain that is currently circulating in Brazil, in principle the results can be generalized for any type of vaccine, evidently with case-by-case complementary studies. The reason is that left-handed chiral gold nanoparticles are not the active ingredient, but an adjuvant that potentiates the recipient’s immune response.

“The key to understanding the contribution of these nanoparticles is the concept of chirality, which applies to an object or system that can’t be superimposed on its own mirror image,” Moura told Agência FAPESP.

Chirality, then, is a type of asymmetry. The term is derived from kheir, the Ancient Greek for hand, and the best example is precisely the difference between left hand and right hand. When we hold up our hands to a mirror, the hand we see on the right is our left hand and vice-versa.

“Everything alive on Earth is chiral. Chiral molecules can have entirely different properties depending on whether they’re left- or right-handed. The two chiral forms of the same molecule are known as enantiomers,” Moura said. “A tragic example is thalidomide, a drug prescribed to pregnant women for morning sickness in the late 1950s and 1960s. It caused babies to be born with a range of malformations. One of the enantiomers in the substance had the expected therapeutic effect, but the other atrophied the limbs of the fetus.”

Research in nanomaterials has advanced sufficiently to enable scientists to separate one enantiomer completely, Moura explained, and the study reported in Nature was based on this possibility. “We began with gold nanoparticles, which are symmetrical and lack chirality. They’re achiral. We first induced chirality in them by having them interact with the amino acid cysteine, and then intensified the induced chirality by exposing them to polarized light using the amino acid phenylalanine as a light-harvesting antenna,” he said.

Chirality is measured in “g-factor” on a scale from minus two (-2) to plus two (+2). The procedure used in the study enabled the scientists to exceed 0.4 and resulted in three nanoparticles: the original achiral gold, the right-handed enantiomer, and the left-handed enantiomer.

“Initially we tested the nanoparticles on human immune cells cultured in vitro and found that the chiral nanoparticles induced production of substances associated with an immune response even in the absence of an antigen – any substance capable of triggering antibody production. This kind of reaction is exactly what an adjuvant does in a vaccine,” Moura said.

The knowledge is published and available to anyone who wishes to use it, Moura stressed. “It can be used by any producer of any type of vaccine, including vaccines for novel variants of SARS-CoV-2 or influenza. We aren’t vaccine developers, but we’re offering this basic knowledge as a novel technological platform for those who are,” he said.

Read the original article on FAPESP