Two-dimensional (2D) transition metal dichalcogenides (TMDs), an emerging class of materials that can be used as semiconductors and insulators, have promising potential in various applications due to their unique properties. But the reliable production of these atomically thin 2D materials has been challenging. A research team led by a material scientist from City University of Hong Kong (CityU) has developed an efficient electrochemical exfoliation method to achieve high-yield production of TMD nanosheets. This new strategy lays a new direction for mass production of TMD nanosheets for wide application in future.

The research team was led by Dr Zeng Zhiyuan, Assistant Professor in CityU’s Department of Materials Science and Engineering (MSE), in collaboration with scientists from the University of Montpellier and Ulsan National Institute of Science and Technology (UNIST). Their findings were published in the academic journal Nature Protocols, under the title “High-yield production of mono- or few-layer transition metal dichalcogenide nanosheets by an electrochemical lithium ion intercalation-based exfoliation method”.

A simple method that offers a higher degree of control

Previously, TMD nanosheets can be produced by a chemical method called lithium ion intercalation-based exfoliation. Intercalation means the insertion of a molecule or ion into materials that have layered structures. If every layer is intercalated with lithium ions, then materials with monolayers will be produced after ultrasound sonication and exfoliation; if only parts of the layers are intercalated with lithium ions, then the result will be bi- or few-layer products.

However, this traditional chemical method needs to be carried out at a relatively high temperature up to 100 °C and for a long time, some may take three days. More importantly, it is difficult to control the amount of lithium insertion. 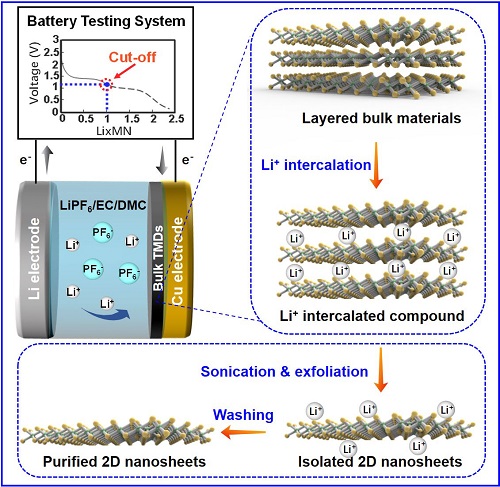 To overcome the above challenges, Dr Zeng and his team adopted an electrochemical approach to synthesise the mono- or few-layer inorganic nanosheets. “The method we developed is relatively simple and straightforward, and it offers a higher degree of control under mild conditions. Using our method, high-yield preparation of monolayer TMD nanosheets can be easily conducted at room temperature of about 25 ℃ within 26 hours,” said Dr Zeng. 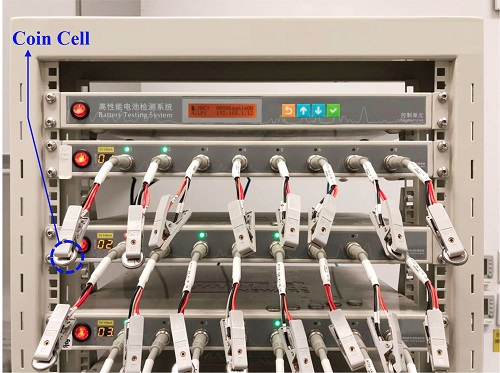 By using this battery testing system, the amount of intercalated lithium ions in layered materials can be controlled effectively by tuning the cutoff voltage.

Dr Zeng highlighted the four advantages of this electrochemical approach. Firstly, a high yield of monolayer TMD is achieved. Taking MoS2 and TaS2, two kinds of TMDs they studied, as examples, among the 2D nanosheets prepared with this method, over 90% of them (92% for MoS2 and 93% for TaS2) were single layer, while the rest of the 8% and 7% were double layers, trilayers, or even multi-layers.

Secondly, they could fabricate monolayer TMD nanosheets in a large lateral size. The lateral size of the MoS2 monolayer the team obtained by this preparation method can reach 3 μm.

Thirdly, their procedure is scalable. The team believes that further scale-up of production of monolayer TMD nanosheets for industry applications can be realised by increasing the bulk TMD amount from milligrams (mg) to grams (g), or even tons. And lastly, their TMD nanosheets are solution-processable and printable. They could be widely and evenly dispersed in aqueous solution without adding a surfactant, and could be used as ink in printing technology. 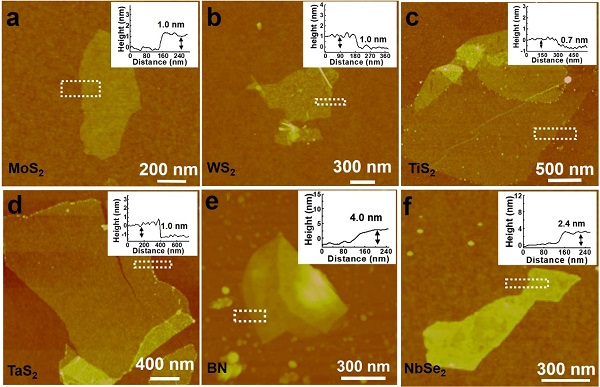 Images of the exfoliated nanosheets of a, MoS2. b, WS2. c, TiS2. d, TaS2. e, BN. f, NbSe2. Mono- and few-layer inorganic nanosheets were successfully produced by this method.

TMD nanosheets the team obtained are solution-processable and printable.

“Our method is a mature, efficient and promising strategy for the high-yield production of mono- or few-layer TMD nanosheets,” concluded Dr Zeng, who has studied the mass production of 2D TMD materials for over 10 years.

The team believed that their method for high-yield and mass production of mono- or few-layer TMD nanosheets would open a new direction for basic and applied research, attracting the attention of both academia and industry. “The TMD nanosheets prepared by this method could be widely applied in various fields such as gas-sensing, memory devices, detection of biomolecules, electrocatalytic hydrogen evolution, light‐emitting diodes and lithium-ion battery,” he added.