Most drugs used today have only one mechanism of action and it is both difficult and expensive to manufacture drugs with multiple functions. Researchers at the NNF-funded research center, CEMBID, at Aarhus University have recently found a way to create more stable nanostructures that can assemble biomolecules with different functions, which in combination e.g., can provide more effective cancer medicine.

For millennia, DNA has played a central role in storing each cell's genetic information and consists of strands with a specific sequence of four different building blocks. These DNA strands are copied by the cell at each cell division in an extremely well-orchestrated way, but amazingly, this sophisticated machinery is governed by very simple rules.

In recent years, it has been found to utilize these simple rules not only in the context of genetic engineering, but also to construct useful DNA nanostructures by designing DNA strands. These DNA nanostructures have been shown to have a number of useful biomedical functions such as to be able to transport cancer drugs to exact places in the body where they are needed. This can increase the effect of the medication as well as provide fewer side effects compared to conventional cancer treatment.

DNA nanostructures are also increasingly used as a tool to bind and assemble biomolecules, into multifunctional structures. One of these DNA nanostructures used forms a branched structure with four ends, called 4-way junctions (4WJ), which are also found naturally.

With specially designed versions of these 4WJ structures, for example, Harvard Medical School in Boston has managed to bind and collect various antibodies, which in combination ensured that T cells attacked aggressive cancer cells more intensively and thus killed tumors. 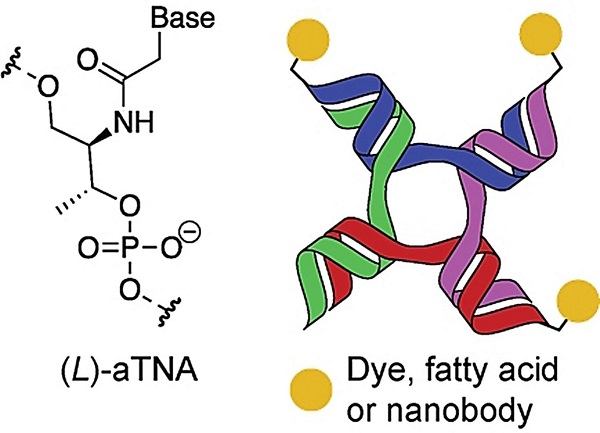 Researchers at Aarhus University have found a way to create more stable nanostructures that can bind and assemble biomolecules with different functions, which in combination e.g., can provide more effective cancer medicine. The illustration is from the scientific article in Angewandte Chemie Int. Ed., which schematically shows the nanostructure used with chains of the artificial building block, acyclic L-threoninol nucleic acid (aTNA).

Researchers who are part of the Center for Multifunctional Biomolecular Drug Design (CEMBID) at Aarhus University are also working on finding new ways to link different drugs to achieve more and more effective mechanisms of action. The research group, led by Professor Kurt Gothelf, has just published an article in the acclaimed journal Angewandte Chemie Int. Ed. with results involving above mentioned 4WJ structures, but in an improved version. The work was performed in collaboration with the groups of Jørgen Kjems and Ken Howard who are also part of CEMBID.

Anders Märcher, a postdoc in Kurt Gothelf's research group and part of CEMBID, has, together with his research colleagues, now found a way to increase the stability of these nanostructures. They have achieved this by using small chains, called oligonucleotides, of artificial and modified building blocks to form the nanostructure. The artificial oligonucleotides, Märcher et al. use is called acyclic L-threoninol nucleic acid (aTNA) and work in the same way and just as well as the natural building blocks of DNA. Here, the sugar molecule (deoxyribose) in the natural building blocks is replaced with an artificial sugar molecule (acyclic L-threoninol), which strengthens the overall structure.

The positive results showed that 4WJ structures with the artificial building block, aTNA, are very stable, do not degrade in the blood, have been shown to be non-toxic to cells, and do not elicit a nonspecific immune response.

When the researchers coupled a particular type of biomolecule, which is known to bind to a biomarker in high-specificity breast cancer cells, to the new 4WJ structure, it turned out that the 4WJ structure may prove effective in directing cancer drugs to the desired cells.

In addition, by making further modifications to the new 4WJ structure, they could extend its lifetime in the bloodstream and thus also the effect of the drug that may be coupled to the DNA nanostructure.

The researchers imagine that their 4WJ structure built with artificial building blocks can both be used as a tool to transport drugs to the right position in a patient's body. In addition, they see that it can serve as a valuable tool in research. For example, researchers imagine that the effects of different combinations of cancer-degrading biomolecules can be screened faster and more efficiently, so that the most effective cancer treatment can be found more quickly.