Propelling micrometre-sized drones using light only and exerting precise control: Physicists at the University of Würzburg have succeeded at this for the first time. Their microdrones are significantly smaller than red blood cells.

A hand-held laser pointer produces no noticeable recoil forces when it is "fired" - even though it emits a directed stream of light particles. The reason for this is its very large mass compared to the very small recoil impulses that the light particles cause when leaving the laser pointer.

However, it has long been clear that optical recoil forces can indeed have a very large effect on correspondingly small particles. For example, the tails of comets point away from the Sun partly due to light pressure. The propulsion of light spacecrafts via light sails has also been discussed repeatedly, most recently in connection with the "star shot" project, in which a fleet of miniature spacecrafts is to be sent to Alpha Centauri.

In the journal Nature Nanotechnology, Würzburg physicists led by Professor Bert Hecht (Chair of Experimental Physics 5, Nano-Optics Group) have now shown for the first time that it is possible to not only efficiently propel micrometre-sized objects in an aqueous environment with light, but also control them precisely on a surface with all three degrees of freedom (two translational plus one rotational).

In doing so, they were inspired by ordinary quadcopter drones, where four independent rotors allow complete control of the movements. Such control possibilities offer completely new options for the usually extremely difficult handling of nano- and micro-objects, for example, for the assembly of nanostructures, for the analysis of surfaces with nanometre precision, or in the field of reproductive medicine.

Polymer discs with up to four light-driven nanomotors

The Würzburg microdrones consist of a transparent polymer disc measuring 2.5 micrometres in diameter. Up to four independently addressable nanomotors made of gold are embedded in this disc.

"These motors are based on optical antennas developed in Würzburg, – that is, tiny metallic structures with dimensions less than the wavelength of light," says Xiaofei Wu, a postdoc in the Hecht research group. "These antennas were specifically optimised for receiving circularly polarised light. This allows the motors to receive the light regardless of the orientation of the drone, which is crucial for applicability. In a further step, the received light energy is then emitted by the motor in a specific direction to generate optical recoil force, which depends on the sense of rotation of the polarisation (clockwise or counterclockwise) and on either of two different wavelengths of light."

It was only with this idea that the researchers were able to control their microdrones efficiently and precisely. Due to the very small mass of the drones, extreme accelerations can be achieved.

The development of the microdrones was challenging. It started back in 2016 with a research grant by the VW Foundation dedicated to risky projects (press release, University of Würzburg, in german) 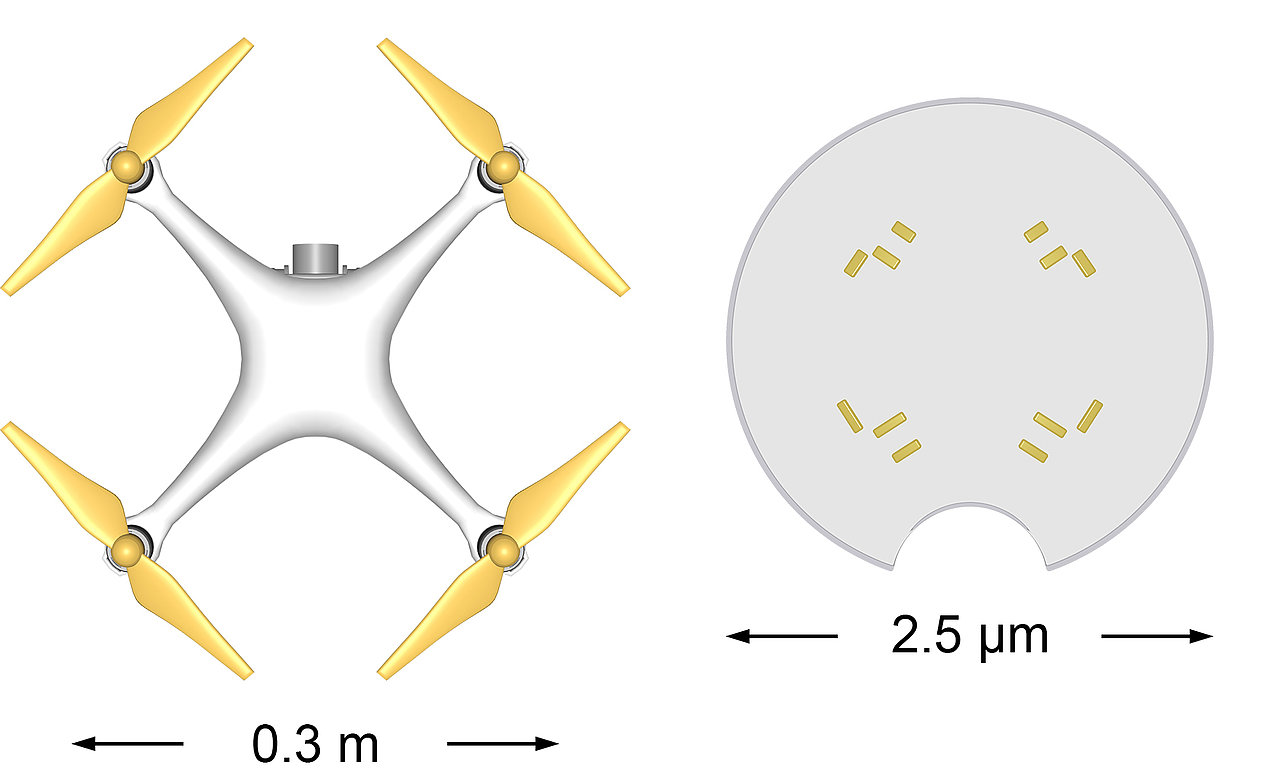 Size comparison between quadrocopter and microdrone.

Precise fabrication based on single-crystal gold

The extremely precise fabrication of the nanomotors is crucial for the function of the microdrones. The use of accelerated Helium ions as a means to cut nanostructures from monocrystalline gold has turned out to be a game changer. In further steps, the drone body is produced using electron beam lithography. Finally, the drones must be detached from the substrate and brought into solution.

In further experiments, a feedback loop is being implemented to automatically correct external influences on the microdrones to control them more precisely. Furthermore, the research team strives to complete the control options so that the height of the drones above the surface can also be controlled. And of course, another goal is to attach functional tools to the microdrones.