University of Texas at Dallas researchers have developed a rapid test for viruses that can deliver results as accurate as lab tests within 30 minutes.

Dr. Zhenpeng Qin, associate professor of mechanical engineering and corresponding author of a new study demonstrating the method, called DIgitAl plasMONic nanobubble Detection (DIAMOND), published the work online March 30 in Nature Communications. Qin and his team in the Erik Jonsson School of Engineering and Computer Science have launched a new company, Avsana Labs, to commercialize the technology through the University’s Venture Development Center.

While the current study focused on respiratory syncytial virus (RSV), Qin said the technology can be applied to other viruses, such as those that cause influenza and COVID-19. Researchers also aim to use the platform to identify cancer biomarkers.

“If we can detect pathogens earlier, we should be able to save lives,” said Dr. Haihang Ye, research associate in mechanical engineering and co-corresponding author of the study. “Our detection is quick, accurate and sensitive.”

The technology is 150 times more accurate than traditional rapid tests and matches the accuracy of polymerase chain reaction (PCR) tests. The new strategy paves the way for much faster results than PCR tests, which often take a day or more for results to be determined. In addition, the tests are inexpensive and do not require complex liquid handling or extensive sample preparation. 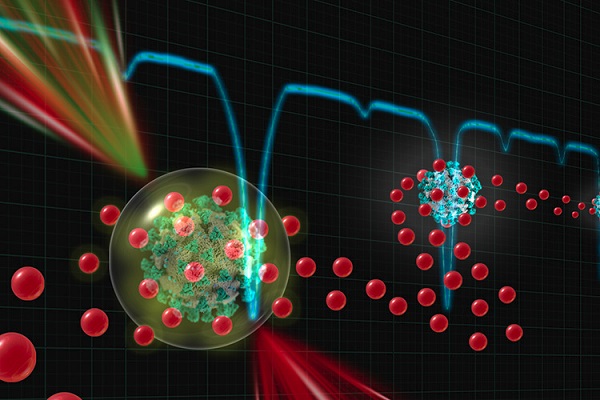 This illustration shows a patient sample, with virus-recognizing gold nanoparticles, moving through a laser checkpoint. The laser activates the nanoparticles on the sample, which absorbs the laser’s energy and expands and generates a vapor bubble. A large nanobubble signals the presence of a virus.

The researchers use a syringe to pump the sample into a tube called a microchannel, which is as narrow as a strand of thin spaghetti. The microchannel is mounted on a glass slide placed on a surface. As the liquid flows through the microchannel, it passes through the light of two lasers in a process that Ye compared to the way luggage moves on a conveyor to be scanned at an airport.

“When bags go through the checkpoint, a scanner will image what’s inside of the bag, and if there’s anything suspicious, there is an alert,” he said. “That’s what we’re doing with this technology. We use two lasers: one to scan the sample and one to tell us whether there’s a virus inside.”

The first laser activates the gold nanoparticles, which absorb the laser’s energy and expand. If the expansion is strong enough, the nanoparticle will boil the surrounding water, generating vapor bubbles. The size of the nanobubbles is what determines the test result. Large nanobubbles signal the presence of a virus.

“If the virus is present, it will have a big nanobubble signal,” said Yaning Liu, a mechanical engineering doctoral student and co-first author of the paper. “If there’s no virus, there will be a tiny nanobubble signal from the particle only so we can differentiate the sample’s status.”

“If we can detect pathogens earlier, we should be able to save lives. Our detection is quick, accurate and sensitive.” Dr. Haihang Ye, research associate in mechanical engineering and co-corresponding author of the study.

The technology would need to receive approval from the Food and Drug Administration before it could be made available to the public. The researchers aim to bring the technology to hospitals, labs, drive-thru pharmacies and, eventually, home tests.

While Avsana Labs works to commercialize the technology, researchers will continue to improve the platform and expand its applications. Avsana and Qin, the company’s president, won the grand prize in a MassChallenge pitch competition for North Texas in January and received $10,000 to help commercialize the technology. MassChallenge is a global nonprofit organization that supports innovation and entrepreneurship.

Qin received $2.5 million in grants (R21AI140462 and R01AI151374) over five years from the National Institute of Allergy and Infectious Diseases, a component of the National Institutes of Health, and a $293,000 grant from the Department of Defense’s Congressionally Directed Medical Research Programs to support the research.

UT Dallas has filed a provisional patent on the technology, and Qin and Kahn hold equity interest in Avsana Labs.